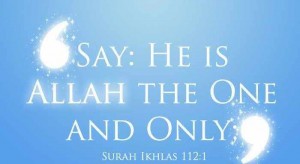 Allah is alone, separate and distinct from His creation. He is the Indivisible who has created His creatures in pairs.

The Arabic word witr refers to a single, indivisible entity. It also refers to a number that cannot be divided by two. The word is found with this second meaning in the verse:

Allah is the Indivisible whose essence cannot be divided. He has no partner, and there is no one who can compare with or rival Him in any way. He is One, unique in His names, attributes and actions.

Allah is Indivisible, and He loves it for us to observe our devotions an odd number of times. What this means is that Allah loves all that He prescribed for us to observe in odd numbers. He loves these things because He commanded us to observe them and determined them to be carried out in their particular forms in accordance with the dictates of His wisdom.

What devotions are being referred to here?

Scholars have differed in answering this question. Some say that the Prophet (peace be upon him) is speaking about the Friday prayer, or the Day of `Arafah during the Pilgrimage, or to the Maghrib prayer which is three units long, or to the Witr prayer at the end of the day which is always observed as an odd number of prayer units.

However, the best approach is to understand it as general in meaning, applicable to all prescribed acts of devotion that are observed an odd number of times. I also believe that it refers to the worshipers who are foremost in doing good deeds, since they stand alone in excellence by doing far more than others are willing to do. Allah praises them by saying:

“Be foremost in seeking forgiveness from your Lord.” (Al-Hadid 57: 21)

Likewise, Prophet Muhammad (peace be upon him) said: “Those who strive in competition (for excellence) stand peerless.”

When he was asked who he was referring to, he said:

“They are the men and women who remember Allah often.” (Muslim)

Allah loves those who stand out ahead of the rest through their devotion and their good deeds, especially when they strive to help others. Allah says:

“For this, those who strive with each other should strive.” (Al-Mutaffifin 83: 26)

By contrast, Allah hates those who strive with one another in stinginess, sin, iniquity and misappropriating the rights of others. Allah is alone, separate and distinct from His creation. He is the Indivisible who has created His creatures in pairs. We find numerous examples of this. Rarely do we find things that are indivisible into pairs. Allah says:

“And everything We have created in pairs, so that perchance you might reflect.” (Al-Dhariyat 51: 49)

There is a supplication associated with this meaning. Once, Prophet Muhammad (peace be upon him) entered the mosque and saw a man who was sitting and completing his prayer. The man was supplicating with the following words:

“O Allah! I ask You by Your being the One, Alone, the Self-Subsisting who neither begets nor is begotten, and who none is like unto Him. I ask You to forgive me my sins, for you are the Forgiving and Merciful.” Upon hearing this, Prophet Muhammad (peace be upon him) said three times:

“Allah has forgiven him.” (Abu Dawud)