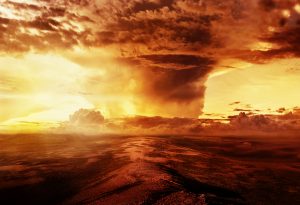 In the past few days, before and during hurricane Sandy, people were so scared and panicking of the consequent damages. People were prisoners in their homes with fear, anxiety, and suspense. They were following the news minute by minute to make sure that they are safe and that the hurricane is not coming their direction. Some people even left the whole city and drove or flew for many hours to escape this natural disaster and what it might bring with it.

For some people, such hurricanes, earthquakes, volcanoes, etc. are merely forces of nature that have nothing to do with faith. They come and go, just like any other natural phenomenon. No spiritual impact or lessons can be drawn from these occurrences.

Other people do believe that God has created the universe, yet they maintain that He is in isolation of whatever goes on in it. According to them, God has created the universe and then left it to work on its own, to manage itself. It is just like the watch in your hand; its manufacturer in Japan or China had made it and now it is with you; whether it works or not, the maker of it does not know anything about it anymore.

But that is totally against the Islamic belief. The whole universe is in the grip of its Creator subhanahu wa ta`ala; He is the ONE who manages it and knows every minute detail of it:

He knows what is in the land and the sea, and there falls not a leaf but He knows it, nor a grain in the darkness of the earth, nor anything green nor dry but (it is all) in a clear book. (Al-An`am 6:59)

Verily, all things have We created in proportion and measure. (Al-Qamar 54:49)

In another place, Allah says:

He who has created all things and ordained them in due proportions. (Al-Furqan 25:2)

Everything that takes place in the upper world of heavens or the lower world of the earth, everything that moves in the heavens or on earth, every plant that grows up, every star that shines, every atom in the universe, all run by the will and the order and decree of Allah. This whole universe from the tiny atom to the giant galaxy is in the hands of Him, and natural phenomena are no exception.

What about laws of causality?

However, that does not go against the laws of causality for the simple reason that these laws are placed in the universe with specific measurements and mechanism according to the universal plan of Allah for the entire universe. These laws of nature work within the framework of Allah’s will and they do not deviate from His set up measurements and decrees. Once again, Allah the Almighty said in the Qur’an:

Verily, all things have We (Allah) created in proportion and measure. (Al-Qamar 54:49)

In other words, it is all according to specific set-up laws and regulations that govern the whole universe.

The positive side of the disaster

What is most important here is that the believers should contemplate on these occurrences and take lessons from them. A believer finds in each and every incident a reminder and a message that draws him closer to Allah and gets him back on the track. Some of the lessons to learn from Sandy hurricane are:

1. The limitless power of Allah 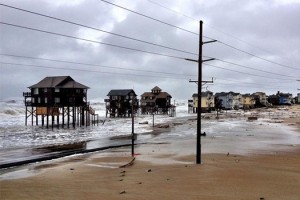 This formidable hurricane attracts our attention to the unlimited extent of the divine power and the exceptional execution of this power. When Allah wills something to happen, He just commands “Be”, and it will be right away. The earth will quake, the wind will storm, and the rivers and seas will flood; everything that Allah wants to move will move and everything that Allah wants to stay still will stay still.

On the other hand, it opens the eyes of humans to their limits and weaknesses. Humans are becoming so haughty and arrogant about their power and the little knowledge they possess. True, they were able to do many things in the universe: They were able to land on the moon and are trying to reach other planets; they made amazing scientific discoveries and technological advances; yet, they stand helpless in front of these natural disasters. Although the path of the hurricane was known in advance, nothing could be done to divert it, let alone stop it. Allah reminds us:

Westerners and secular scientist used to say that with science, man was able to defeat, suppress and subjugate the nature and the whole universe, but this is not true. Man was able to subjugate parts of this nature and universe according to the laws of subjugation that Allah has placed in the universe. But the fact remains that this nature and universe are stronger than man who stands helpless and powerless in front of it.

`Ali ibn Abi Talib, may Allah be pleased with him, used to say:

“How helpless is the son of Adam. A small bug would hurt him, and he could die if he chokes and his body would smell bad if he sweats.”

A small bug can make man restless because of its pain and nowadays we know that a very tiny microbe or virus that cannot even be seen by the naked eye except after magnified millions of times can kill man. This is how week man is, As Allah said:

So, through these disasters, Allah wanted humans to realize their real size and their real power in the universe and also realize that all power is from Allah, all knowledge rests with Allah and all wisdom is possessed by Allah Alone.

2. The value of this life

These disasters also show us the real value of this dunya (this worldly life). This dunya that people fight over; the dunya that people cling to so strongly and are willing to be enemies of one another for its sake has no value whatsoever. A man can be safe in his house and all of a sudden he is taken by one of these disasters. All of a sudden he is dead. In seconds, life is taken from him.

That is the value of this dunya. People think that death is far from them; however, it is very close to them, even closer to them than the garments that they wear. Allah says:

And the matter of the Hour (Day of Judgment) is not but as a twinkling of the eye or even nearer. Truly Allah is able to do all things. (An-Nahl 16:77)

Finally, these disasters provide us an opportunity to wake up and get back to our Lord. Allah subhanahu wa ta`ala specifically mentioned that in the Qur’an:

Corruption (natural disasters, diseases, drought etc.) has appeared both on land and sea because of what the hands of humans have committed, that He (Allah) may make them taste part of that which they have done, in order that they may return (by repenting to Allah). (Ar-Rum 30:41)

So, these disasters might bring some benefits with them if they are really contemplated and reflected upon. It happens a lot of times that people come back to the way of Allah through hardships and calamities better than through ease and luxury.