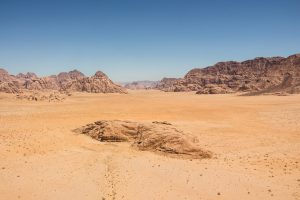 Umar ibn al-Khattab said: One day when we were with God’s messenger, a man with very white clothing and very black hair came up to us. No mark of travel was visible on him, and none of us recognized him. Sitting down before the Prophet, leaning his knees against his, and placing his hands on his thighs, he said, “Tell me, Muhammad, about submission.”

He replied, ‘Submission means that you should bear witness that there is no god but God and that Muhammad is God’s messenger, that you should perform the ritual prayer, pay the alms tax, fast during Ramadan, and make the pilgrimage to the House if you are able to go there.”

Remarking that he had spoken the truth, he then said, “Now tell me about doing what is beautiful.”

He replied, “Doing what is beautiful means that you should worship God as if you see Him, for even if you do not see Him, He sees you.”

Then the man said, “Tell me about the Hour”

The Prophet replied, “About that he who is questioned knows no more than the questioner.”

The man said, “Then tell me about its marks.”

He said, “The slave girl will give birth to her mistress, and you will see the barefoot, the naked, the destitute, and the shepherds vying with each other in building.”

Then the man went away. After I had waited for a long time, the Prophet said to me, “Do you know who the questioner was, ‘Umar?” I replied, “God and His messenger know best. “He said, “He was Gabriel. He came to teach you your religion. ”

To begin explaining the meaning of this hadith let us flesh it out by adding some background information that would be obvious to the original listeners but not to a reader situated many centuries and miles away.

Try to imagine the situation. The Messenger of God, at the time the greatest human being on the face of the earth (as far as his companions were concerned – and the historical record bears them out), is sitting at the edge of an oasis in Medina with a group of his companions, that is, people who have accepted that he is the mouthpiece of God. Suddenly a man appears whom no one recognizes.

Medina, at the time, is a tiny community in the midst of the desert (with a population of several hundred or perhaps a few thousand). Everyone knows everyone. If a traveler arrives, it is no small event, given the difficulty of travel and the small population. Everyone learns about new arrivals within hours. The system of personal relationships established by familial, tribal, and other bonds ensures that news is spread around much more efficiently than can ever be accomplished by today’s six o’clock news. A man appears whom no one knows, but no one has arrived in town for several days, except the uncle of so and so, whom several of them have already seen.

Not only do the companions fail to recognize the man, but he also shows no signs of travel, which is very strange. If they do not know him, then he must be a newly arrived traveler. Someone would not be able to freshen up that quickly after several days of travel in the desert, even if he had traveled only by night on the back of a camel. (You think you feel bad after six hours in a car-think of six days in the hottest and dustiest environment you can imagine, with no air-conditioned rest stops for coffee or soda.)

As soon as the man arrives, everyone is all ears. Who can this person be, and how did he get here without our knowing about it? Next strange fact: The man is obviously on familiar terms with the Prophet of God. He comes right up to him and kneels down in front of him, his knees against the Prophet’s knees. Notice that the Prophet himself is kneeling, not in prayer as modern Westerners might kneel, but simply because kneeling is, for most Orientals, the simplest and at the same time the most respectful way to sit. Remember that, even in houses, chairs were unheard of. People sat on the ground, as they still do in much of the world and this includes some of the richest and most sophisticated parts of the world, such as Japan. For most of the ancient world, chairs were the prerogative of kings.

You would not go right up to a person and kneel with your knees touching his unless he were, for example, your brother or a very close friend. The normal procedure, even if the person sitting there was just an ordinary person, would be to greet him from a respectful distance and keep the distance. But the stranger from the desert obviously knows Muhammad very well. He even places his hands upon Muhammad’s thighs, which would be an unheard of piece of effrontery if the man were a stranger. Then the man addresses Muhammad by his name, whereas people always address him by his title, Messenger of God. The man begins talking without introduction as if he had been part of the conversation all along.

Once Muhammad answers the man’s first question, the man says, “You have spoken the truth.” ‘Umar remarks, “We were surprised at his questioning him and then declaring that he had spoken the truth.” This is an enormous understatement. More likely, the companions were flabbergasted. What kind of insolence is this? To come up to God’s own messenger and begin to grill him, and then to pat him on the head as if he were a schoolboy! This is inconceivable. But then again, the companions took their clues from Muhammad. He was acting as if all this were perfectly normal and natural. What could they do but follow his example?

After the man leaves, Muhammad waits awhile, allowing his companions to think about this strange event. Finally, he tells them what had happened. They would not soon forget, and you can be sure that by that night, everyone in Medina had heard about Gabriel’s appearance. No one was supposed to forget about this visit, for the Prophet had just presented them with their religion in a nutshell. If they ever wanted to know what was essential in Islam, all they had to do was remember the strange events of this day.

Excerpted from the book “The Vision of Islam” by Sachiko Murata and William C. Chttick.