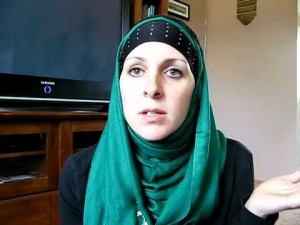 I went into Taoism, Buddhism, and Judaism. I searched everything I thought, everything.

I was asked about why I converted and I’m sure that a lot of my old high school pals who have searched me and found me on Facebook were like “What?” because this Hijab that you see now is not definitely what they saw back then.

And it is not just the covering. It’s all, that I have faith because I was a very outspoken atheist back in the day (I’m so old now, I can’t believe how old I’m getting!).

So I guess how did I come to this?

Let’s see it would be in high school, and I had my boyfriend at the time who was really great for me, wasn’t he?!

Anyways, it wasn’t the best relationship. He was kind of a dungy! But it is what it is. Anyways, then I got pregnant and dropped out. And I gave my baby up for adoption and blamed God for how horrible my life was. So I turned my back on Him, and what can you say?

So then I healed a little bit I guess in myself and I started searching.

Searching for the Truth

I know that that’s a lie! But I believed her and looking back at it now, that is really kind of funny. But anyway that’s what we went to church for: weddings and funerals, and that was it.

So I found a Lutheran church and I went to it and it was OK and got the bible and read into it and I didn’t feel it. I didn’t feel what I saw these people around me feeling and so I looked elsewhere. I went into all the ‘isms’.

I went into Taoism, Buddhism, and Judaism. I searched everything I thought, everything. I searched all kinds of faiths and all religions of the world that I could find and nothing hit home for me. And so I gave up and I was like OK that’s it, if these things aren’t right and I can’t find anything that’s right then that’s it. There’s nothing for me, there is no God.

So I went back to that sort of Atheism, but still searching. I guess that is not really atheist if you are searching for God, but whatever.

Anyways, she was talking to me and then she said “When I make love to my husband, I’m making love to Jesus Christ!” And I was like “What?!!” I’ll let you digest that for a little bit because it took me a moment.

And I was like “You are off your rocker! You got to be kidding me! How psycho are you. You are nuts” and I went to say that because I somehow formulated in my mind probably back when I was 10 or 11 years old that I could not believe that Jesus was the son of God.

I just thought “He is God. Why does He need a son? He is God. Is He going to die that He needs a son? And Jesus walking around on earth and eating and pooping?! That’s very ungodly to me.”

So formerly I had this kind of basis in my mind I guess to begin with and so I had said that to her. And she didn’t like that and we kind of had a spat, nothing violent, but just verbal clashes back and forth with my somewhat atheist views against her very strong born-again Christian views.

And then along came my boss who happened to be Muslim. He set me aside and said “You have some interesting ideas. I’m going to bring you some literature.” So the next day he came back, I don’t know if he went to the mosque or whatever, and he brought some pamphlets about Islam and I gobbled them up, I could not read them fast enough.

And then he brought me back a Quran and I read it. I didn’t read the whole Quran! I read the very first chapter. It’s called the Opening Surat Al-Fatihah, which is very similar to some of the things I guess in Christianity, but when you are faced with the truth it’s absolutely undeniable and that was undeniable to me. I knew it.

It’s literally six or seven verses, doesn’t even take up a quarter of a page, but I knew that I had found the religion that I have been searching for.

And then I was scared because even back then, almost 13 years ago, Islam was pretty much synonymous with terrorism. And I thought how can I know that this is the right faith for me when you are hearing about suicide bombers and hijackers and all these things?

But the more I studied and the more I read into it, and I certainly didn’t just take the information from my boss, I have a brain. I used my brain and I studied. The truth is the truth, no matter how many ways you try and turn it and spin it and wrap it, it’s what it is. And I knew that that’s what I needed to do… and I became a Muslim… and then I married my boss!

That’s my story so I hope you all found it interesting, or it answered some questions…