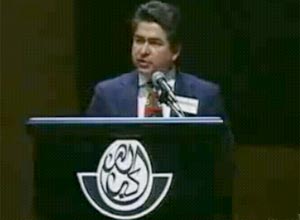 Brothers and sisters, I want to talk to you about Islam from an American perspective.

An American born in America, not Muslim, without Muslim parents.

So, sometimes I feel like I’m not worthy and I don’t deserve certainly to be in the same category as some of the fine brothers that I had the opportunity to listen to this morning and this afternoon and later on today and throughout the convention.

But I have learned one thing about Islam that is you don’t argue with God. So I’ll take whatever Allah the Almighty blesses me with and I hope to do the best that I can.

I have a very kind of unique background in a way… I’m originally from Texas from a small west Texas town called Lubbock. It’s right in the center of a Bible-belt kind of city, very religious with lots of churches in the city. Being Hispanic, I speak Spanish fluently.

I was of course baptized and raised as a Catholic until the age of about 6 years old. When I turned 6 years old, my parents received a knock on the door and there were some people standing there with a watchtower… They started to speak with my grandfather. After a while they started to come back. Before long they established a home Bible study, and before you knew, we were all attending the church of Jehovah’s Witness.

We were all attending the meetings and congregations there. Well, all the family started to go as Jehovah’s Witnesses. Before long, I was gaining a very accurate knowledge of the Bible which is kind of an irony because any one who is familiar with the scriptures, the book of the people of the book, knows that in reality it has been polluted so much throughout history. It has been contaminated and polluted so much. But I have always felt that in its pure form, even with the Jews the Torah was given to them, in its pure form, and by the time it was moved around and polluted, it was from God.

They indulged the same thing. The Gospel when it was given to Jesus, at the beginning before the pollution and contamination, was good and sound. Well, my knowledge of the Bible started to grow. I began to study more and more. By the time I was 13 years of age I was baptized as a Jehovah’s Witness. And I had this fire, this ambition inside of me to want to do more of God’s works… So by the time I was 16 years of age, something very unusual happened. I was approved and given their blessing, and I started to speak to big crowds of people. I started to give talks in different congregations.

By the time I was 20 years of age, I had my own congregation that I had to pastor or take care of. So as you can see, I was very much entrenched into the teachings of Jehovah’s Witnesses, especially knowing that they were different from the world. But see, the world looked at them any time, especially western society, as they were different. They looked at them as extremists… fanatics… fundamentalists… sounds familiar, ha?!

I realize now that it was all in Allah’s planning for me. I didn’t know it at that time, but what I wasn’t aware of then that I’m aware of now, is that when I was a 120 days in the womb of my mother, the angels came and they had already planned where I was going to be, what I was going to do and that I was going to be on this day talking to you here, alhamdulellah (praise be to God).

About 5 years ago, I had the privilege and honor of meeting a Muslim person. And I noticed that person because of her personality. She was always happy and always friendly. This attracted me to that person. So we started talking and she told me she was a Muslim and everything about that.

I said “Really? I’ve heard of Muslims. Oh you have the religion Islam, yeah I’ve heard of it, I have no intention of becoming Muslim”. And I thought I will learn how to become a Christian, a good Christian, not Jehovah’s Witness way but how God wants me to be a Christian.

So I began to study the Bible very closely mostly at night for many hours and in prayer. I read all the New Testament. I thought I had it all lined up. Then I started on the Old Testament; Genesis, Deuteronomy, Exodus. When I got to the Prophets, something happened. All of a sudden, I wanted to rest my eyes and I started thinking about that person that told me about Islam, about being a Muslim, about the Qur’an, and about Allah the Almighty. So I said OK, I’m open-minded now. I don’t think like a Jehovah’s Witness. I’m going to find out if these people are liars. If they are not good or whatever. I’m going to find that for myself. I started thinking “1.2 billion Muslims! Satan is good but he is not that good. To deceive 1.2 billion people so I’ll look at this Qur’an and I’ll see what it is.”

I started reading the Qur’an. I read it completely all the way through the first time. It was unbelievable. Everything started to fall in place. Everything made sense. I took the Qur’an and now I could say to my Bible I know now it all works together. Now I understand. Because of the Qur’an I was able to understand my Bible. And I said “Oh, this is great, God is making me a good Christian” he is going to teach me through the Qur’an.

Well, as I kept reading the Qur’an more and more because it made more sense, it was easier, it was simpler. It appealed more to my heart and my intellect and my mind. And my Bible, as much as I know that one time it was a holy word of God, now it’s polluted, I started to put it down more, and I started to read the Qur’an. So now I said now I have the Qur’an now I have to meet these people. I have to go to where they go. Where do they meet? Well they meet n a place called a masjid (mosque) so I’m going to see them at this mosque. I’m going to check them out as they say.

So to make a long story short which I never can do, I went to this mosque, I find out where it was in Southern California. I went to the mosque and I had an upset stomach. It’s like you know you got to do something but you don’t want to do it. So I wanted to do it but I had a kind of uneasiness. I said well I’m going to drive around and see if I can find a parking space. I kept driving around several times and there were no parking spaces around the mosque.

Finally I said “That’s it, I’m going to go one more time, if I don’t find a parking space I’ll go home”. That was my excuse. As I was making the turn, right in front of the mosque a car pulled out! I looked at the sky and thought “You are making it very hard for me” so I pulled in. Now I’m more nervous because I have to go and face these people. Now I have to go and I know nothing about Islam or Muslims and I have to go to this place. Our mosque there in Southern California center, it gets filled up most of the time. It gets filled up that you have to go around and park where they have some rugs and such stuff. So I’m nervous, I’m going to go for the first time.

I walked up to the door and there is this big brother Arab-descent with a big beard standing in guard.

He said to me “Go around”

I said “OK” and I went around.

I got to the other side and there were the brothers who were praying and bowing. Some of them looked at me and I said “Oh no, I’m just watching, thank you I’m just looking”. Finally, it was all over, they finished the prayer and they all started to go into the mosque and mingle. So I wanted into the mosque and I started to mingle. These brothers started to say “Assalamu`alaikum, Assalamu`alaikum” (peace be upon you), I didn’t know what it means or what they are saying but this is the way it happened.

Finally a brother saw that I was a little confused. He grabbed me by the hand and he took me there and said “You are new, right?”

I said “Yes, this is my first time”

He said “Come on, I’ll show you around”.

He took me everywhere; he took me to the men’s room and showed me the different places.

He said “And right here, this is where we do wudu,”

I said “Ok, how do you do this?” and he showed me how they washed themselves and everything. He was a very nice brother. His name is Umar. Allah sent him to me.

Now the blood thickens, because I’m impressed and I like what I see. Now I go home, I’m very happy. I decided “I want to pray like them”. When I was Christian I prayed, just kneeled my head and I prayed. But something appealed to me. When these people got down on their knees and started to bow and prostrate themselves before the Almighty God the Creator of the universe. You see how the religion works, you see how our religion is so much simpler, how it’s so beautiful, how it appeals to the intellect and mind. That feeling appealed to me. It made sense to me. This is the God that created the universe. Shouldn’t I bow down to him? Am I so arrogant?

It all comes down to several things in the Qur’an and Hadith. One of my favorites was when I was looking to this surah. It says “When the victory of Allah has come and the conquest, And you see the people entering into the religion of Allah in multitudes, Then exalt [Him] with praise of your Lord and ask forgiveness of Him. Indeed, He is ever Accepting of repentance.”

We have the most beautiful book that God has ever produced for the salvation of mankind; for them to live in peace and tranquility, the Qur’an. We need to read it ourselves and find out for ourselves what’s the acceptable word of God and what is our purpose on this earth.