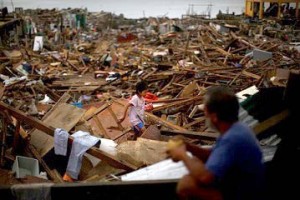 Seeing catastrophic destruction, as the storm covers all of the Philippines, Muslim organizations worldwide dispatched their teams to offer help.

Out of Islam’s respect to human life and the high regard it gives to all living things, especially human beings, Muslim charity organizations and relief agencies all over the world felt it incumbent upon them to help our brothers in humanity in the Philippines after they were hit by the massive and destructive Typhoon Haiyan, November 2013.

“The biggest challenge is the scale. Parts of Cebu were right in the path of the storm and they lost everything,” Islamic Relief’s Head of Humanitarian Department, Imran Madden, said from the Philippines, according to the Islamic Relief website.

“We’ve reached a lot of people but there are many more we’ve still to reach.”

Typhoon Haiyan tore through the Philippines on Nov. 8th and 9th.

Counting the dead, the Philippines is facing an enormous rebuilding task, to revive the country back from Typhoon Haiyan, which killed at least 3,974 people and left 1,186 missing, with many isolated communities yet to receive significant aid despite a massive international relief effort.

Philippines authorities and international aid agencies face a mounting humanitarian crisis, with the number of people displaced by the catastrophe estimated at 4 million, up from 900,000 late last week.

The Disasters Emergency Committee (DEC) has launched a major appeal for the millions of people affected by Typhoon Haiyan.

DEC member Islamic Relief is in the eastern Philippines helping to provide food, water and shelter to storm-battered communities.

In just 48 hours the DEC has raised a staggering £23 million for the DEC Philippines Typhoon Appeal.

“The response so far has been overwhelming. Please continue to donate, there are still people missing, homes of hundreds of thousands of people have been damaged or destroyed,” says Islamic Relief UK’s Director Jehangir Malik.

“There is still a lot of work to be carried out, people are in desperate need.”

Up to November 15, Islamic Relief has helped distribute food packs in the devastated area of Cebu, reaching around 70,000 people.

The 4-litre bottle of water included with each pack has been particularly vital – with many water sources contaminated, clean water is critical to stop the spread of disease.

Islamic Relief is aiming to distribute food to further 20,000 more families, and we’re also planning to start providing shelter to those who have been made homeless.

Seeing catastrophic destruction, as the storm covers all of the Philippines, Muslim organizations worldwide dispatched their teams to offer help.

“Zakat Foundation of America has dispatched a team to assess the needs of hurricane victims to alleviate the suffering they face,” the Zakat foundation said on its website.

“Please help your brothers and sisters in the Philippines with a relief package today,” it added.

“Islamic Help has launched an emergency appeal to help those suffering as they struggle to rebuild their lives in the aftermath of Haiyan,” the Islamic NGO said.

“It is critical that they receive food, water, emergency shelter and medical help immediately as they battle for survival.”

Islamic Relief USA has also set an appeal to raise $1,000,000 for humanitarian efforts in Philippines, focusing on emergency assistance that may include food aid, shelter service or more.

Muslims make up nearly 8 percent of the total population in the largely Catholic Philippines.

The mineral-rich southern region of Mindanao, Islam’s birthplace in the Philippines, is home to 5 million Muslims.

Islam reached the Philippines in the 13th century, about 200 years before Christianity.