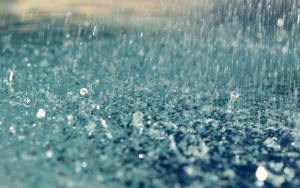 A raindrop falling from such a height could normally reach a very destructive speed.

Rain is indeed one of the most important factors for the permanence of life on earth. It is a prerequisite for the continuation of activity in a region. Rain, which carries great importance for all living things, including human beings, is mentioned in various verses of the Qur’an, where substantial information is given about the formation of rain, its proportion, and effects. This information, which never could have been known by the people of the time, shows us that the Qur’an is the word of God. Now, let us examine the information given in the Qur’an about rain.

In the eleventh verse of Surat az-Zukhruf, rain is defined as water sent down in “due measure”. The verse is as follows:

“He sends down (from time to time) water from the sky in due measure, and We raise to life therewith a land that is dead. Even so, will you be raised (from the dead).” (Az-Zukhruf 43: 11)

This “measure” mentioned in the verse has to do with a couple of characteristics of rain. First of all, the amount of rain that falls on the earth is always the same. It is estimated that in one second, 16 million tons of water evaporate from the earth. This number is equal to the amount of water that drops on the earth in one second. This means that water continuously circulates in a balanced cycle according to a “measure”.

Another measure related to rain is about its falling speed. The minimum altitude of rain clouds is 1,200 meters. When dropped from this height, an object having the same weight and size as a raindrop, would continuously accelerate and fall on the ground with a speed of 558 km/h.

Certainly, any object that hits the ground with that speed would cause great damage. If rain happened to fall in the same way, all harvested lands would be destroyed, residential areas, houses, and cars would be damaged, and people would not be able to walk around without taking extra precautions.

What is more, these calculations are made just for clouds at a height of 1,200 meters; there are also rain clouds at altitudes of 10,000 meters. A raindrop falling from such a height could normally reach a very destructive speed.

But this is not how it works; no matter what height they fall, the average speed of raindrops is only 8-10 km/h when they reach the ground. The reason for this is the special form they take. This special form increases the friction effect of the atmosphere and prevents acceleration when the raindrops reach a certain speed “limit”. (Today parachutes are designed by using this technique.)

This is not all about the “measures” of rain. For instance, in the atmospheric layers where it starts to rain, the temperature may fall as low as 400 °C below zero. Despite this, raindrops never turn into ice particles. (This would certainly mean a fatal threat to the living things on earth.) The reason is that the water in the atmosphere is pure water. As is well known, pure water hardly freezes even at very low temperatures.

How rain forms remained a great mystery for people for a long time. Only after weather radar was invented, was it possible to discover the stages by which rain is formed. The formation of rain takes place in three stages. First, the “raw material” of rain rises up into the air. Later clouds are formed. Finally, raindrops appear.

These stages were clearly defined in the Qur’an centuries ago where precise information is given about the formation of rain:

“It is God Who sends the Winds, and they raise the Clouds: then does He spread them in the sky as He wills, and break them into fragments, until you see rain-drops issue from the midst thereof: then when He has made them reach such of his servants as He wills, behold, they do rejoice!” (Ar-Rum 30: 48)

Now, let us look at the three stages mentioned in the verse:

1st Stage: “It is God Who sends the winds…”: Countless air bubbles formed by the foaming in the oceans continuously burst and cause water particles to be ejected towards the sky. These particles, which are rich in salt, are then carried away by winds and move upwards in the atmosphere. These particles, which are called aerosols, form clouds by collecting around themselves the water vapor, which again ascends from the seas, as tiny drops by a mechanism called “water trap”.

2nd Stage: “…and they raise the Clouds: then does He spread them in the sky as He wills, and break them into fragments…”: The clouds form from the water vapor that condenses around the salt crystals or the dust particles in the air. Because the water drops in these are very small (with a diameter between 0.01 and 0.02 mm), the clouds are suspended in the air and they spread in the sky. Thus, the sky is covered with clouds.

3rd Stage: “…until you see rain-drops issue from the midst thereof”: Water particles that surround salt crystals and dust particles thicken and form raindrops. So the drops, which become heavier than air, depart from the clouds and start to fall on the ground as rain.

Every stage in the formation of rain is told in the verses of the Qur’an. Furthermore, these stages are explained in the right sequence. Just as with many other natural phenomena in the world, it is again the Qur’an that provides the most correct explanation about this phenomenon, and more, it has announced these facts to people centuries before they were discovered by science.

Life Given to a Dead Land

In the Qur’an, many verses call our attention to a particular function of rain, which is “giving life to a dead land”:

“We send down pure water from the sky. That with it We may give life to a dead land, and slake the thirst of many beings We have created, beasts as well as humans.” (Al-Furqan 25: 48- 49)

In addition to furnishing the earth with water, which is an inevitable need of living beings, rain also has a fertilization effect.

Raindrops that reach the clouds after being evaporated from the seas contain certain substances “that will give life” to a dead land. These “life-giving” drops are called “surface tension drops”.

Surface tension drops form on the top level of the sea surface, which is called the “microlayer” by biologists. In this layer, which is thinner than one-tenth of a millimeter, there are many organic leftovers caused by the pollution of microscopic algae and zooplankton. Some of these leftovers select and collect within themselves some elements that are very rare in seawater, such as phosphorus, magnesium, potassium and some heavy metals like copper, zinc, cobalt, and lead.

These “fertilizer”-laden drops are lifted up into the sky by the winds and after a while, they drop on the ground inside the raindrops. Seeds and plants on the earth find numerous metallic salts and elements essential for their growth here in these raindrops. This event is revealed in another verse of the Qur’an:

“And We send down from the sky rain laden with blessing, and We produce therewith gardens and grain for harvests.” (Qaaf 50: 9)

Salts that fall with rain are small examples of certain elements (calcium, magnesium, potassium, etc.) used for increasing fertility. The heavy metals found in these types of aerosols are other elements that increase fertility in the development and production of plants.

A barren land can be furnished with all the essential elements for plants in a 100-year period just with these fertilizers dropped with the rain. Forests also develop and are fed with the help of these sea-based aerosols. In this way, 150 million tons of fertilizer falls on the total land surface every year. If there were no natural fertilization like this, there would be very little vegetation on the earth, and the ecological balance would be impaired.

What is more interesting is that this truth, which could only be discovered by modern science, was revealed by God in the Qur’an centuries ago.