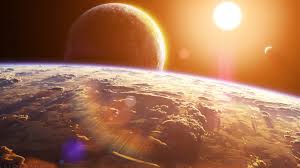 These facts were revealed in the Qur’an in an age when mankind simply did not have the means to make scientific discoveries of their own accord.

As we know, the only source of light in the Solar System is the Sun. With advances in technology, astronomers discovered that the Moon was not a source of light but that it merely reflects the light reaching it from the Sun. The expression “lamp” in the above verse is a translation of the Arabic word “sirajan,” which most perfectly describes the Sun, the source of light and heat.

In the Qur’an Allah employs different words when referring to such celestial bodies as the Moon, the Sun and the stars. This is how the differences between the structures of the Sun and Moon are expressed in the Qur’an:

“Do you not see how He created seven heavens in layers, and placed the moon as a light in them and made the sun a blazing lamp?” (Nuh 71:15-16)

On the other hand, the word “star” comes from the Arabic root “nejeme,” meaning “appearing, emerging, visible.” As in the verse below, stars are also referred to by the word “thaqib,” which is used for that which shines and pierces the darkness with light: self-consuming and burning:

We now know that the Moon does not emit its own light but reflects that reaching it from the Sun. We also know that the Sun and stars do emit their own light. These facts were revealed in the Qur’an in an age when mankind simply did not have the means to make scientific discoveries of their own accord. It was an age when peoples’ knowledge of celestial bodies was severely restricted, to say the least. This further emphasizes the miraculous nature of the book of Islam.