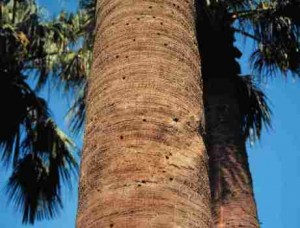 “The pains of labor drove her to the trunk of a date-palm. She said, ‘Oh if only I had died before this time and was something discarded and forgotten!’ A voice called out to her from under her, ‘Do not grieve! Your Lord has placed a small stream at your feet. Shake the trunk of the palm towards you and fresh, ripe dates will drop down onto you.'” (Maryam 19: 23-25)

Modern medicine shows that squeezing an object during labor facilitates the baby’s downward passage through the birth canal. The muscles used during contraction are the same as those that propel the baby outside the womb. Various methods are employed to achieve this, such as pulling on a cord suspended from the ceiling or on arms attached to the two sides of the bed or else holding onto and squeezing someone’s hand.

A U-shaped bar, known as a “squat bar,” mounted onto the bed during labor is used for that end. Pulling on this bar facilitates the baby’s leaving the womb, shortens the length of the birth canal, widens the mouth of the womb and reduces the need for many other devices and techniques during labor. (1)

This bar helps the mother’s squatting motions as she pulls herself up and down on it. It also means the mother remains immobile as the baby emerges. (2) In this position, the muscles needed to move the baby down the birth canal expend the minimum amount of energy. In addition, with the expansion of the pelvic bone, 30% more room is made available for the baby to pass through. With the expansion and contraction movement, the body’s propulsive force is raised to the highest level and the baby is able to move smoothly during the birth process.

There is great wisdom in the way that, by means of Allah’s angels, Maryam shook the branches of the palm tree toward her. The Arabic word “huzzee” means “to shake fast, to move or to rock.” In addition to dates facilitating birth and having nutritious properties, pulling the branches toward one to shake them and then letting them pull back in another movement also facilitates birth. This technique applied in our own day, is one of the proofs that Allah supported Maryam (pbuh) with His compassion and that the Qur’an is the word of our Lord, the Omniscient.