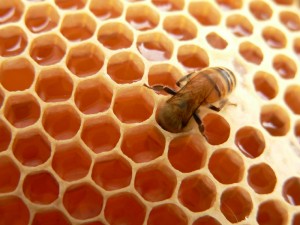 Honey is used in the problems caused by tissue deficiency and body frailty. It is obvious that honey, which is produced in amounts much higher than the requirements of the bees, is made for the benefit of man.

“And your Lord revealed to the bee saying: Make hives in the mountains and in the trees and in what they build: Then eat of all the fruits and walk in the ways of your Lord submissively. There comes forth from within it a beverage of many colors, in which there is healing for men; most surely there is a sign in this for a people who reflect.” (Al-Nahl 16: 68-69)

Do you know how important a food source the honey is, which Allah offers man by means of a tiny insect?

A Vital Food Source from a Tiny Insect

Honey is composed of sugars like glucose and fructose and minerals like magnesium, potassium, calcium, sodium chlorine, sulfur, iron, and phosphate.

It contains vitamins B1, B2, C, B6, B5, and B3, all of which change according to the qualities of the nectar and pollen. Besides, copper, iodine, and zinc exist in it in small quantities, in addition to several kinds of hormones.

As Almighty Allah says in the Qur’an, honey is a (healing for people). This was confirmed by the following facts. The scientists who assembled during the World Apiculture Conference held on September 20–26, 1993, in China discussed treatments with honey derivatives:

– A Romanian doctor stated that he tried honey on cataract patients, and 2002 out of his 2094 patients recovered completely.

– Polish doctors also informed the conference that propolis helps to cure many diseases such as hemorrhoids, skin problems, gynecologic diseases, and many other disorders.

While honey is used as a remedy, it also has many other qualities that make it superior to any other substance, natural or unnatural. Here are some of these qualities.

Easily digested. Despite its high acid content, honey is easily digested by the most sensitive stomachs because sugar molecules in honey can convert into other sugars (e.g., fructose converts to glucose). It helps the kidneys and intestines to function better.

Low calories. Another quality of honey is that, when it is compared with the same amount of sugar, it gives 40 percent fewer calories to the body. Although it gives great energy to the body, it does not add weight.

Rapid diffusion. When accompanied by mild water, honey diffuses into the bloodstream in seven minutes. Its free sugar molecules make the brain function better, as the brain is the largest consumer of sugar.

Energy for blood formation. Honey provides an important part of the energy needed by the body for blood formation. In addition, it helps in cleansing the blood. It has some positive effects in regulating and facilitating blood circulation. It also functions as a protection against capillary problems and arteriosclerosis.

Antibacterial property. This bacteria-killing property of honey is named the “inhibition effect.” Experiments conducted on honey show that its antibacterial property increases twofold when it is diluted in water. It is very interesting to note that newly born bees in the colony are nourished with diluted honey by the bees responsible for them — as if they know this feature of honey.

Royal jelly is a substance produced by worker bees inside the beehive. Inside this nutritious substance, there are sugar, proteins, fats, and many vitamins. It is used in the problems caused by tissue deficiency and body frailty. It is obvious that honey, which is produced in amounts much higher than the requirements of the bees, is made for the benefit of man. And it is also obvious that bees cannot perform such an unbelievable task “on their own.”

Showing His blessing on man, Allah says in the Qur’an what means,