The Role of Touch in Chemical Communications 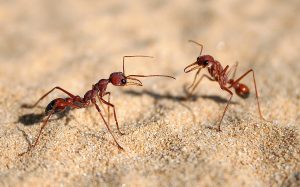 When the ants touch the bodies of their nestmates, the goal is not to give them information but to receive information by detecting the chemicals they secrete.

The communications by ants by touching each other with their antennae in maintaining intra-colony organization proves that there is in use an “antennal language” in its fullest sense.

The antenna signals created by touching in ants are used for various purposes like commencement of dinner, invitations and social meetings where nestmates get to know each other. For instance, one type of worker ant species living in Africa, workers first touch by the antennae when they meet each other. Here, “antenna shaking” means just a salute and an invitation to the nest.

This invitation behavior is even more striking in certain ant species (Hypoponera). When a pair of workers meet face to face, the inviting ant tilts its head sideways 90 degrees and strikes the upper and lower surfaces of the nestmate’s head with its antennae. Often the solicited ant responds with similar antennation.

When the ants touch the bodies of their nestmates, the goal is not to give them information but to receive information by detecting the chemicals they secrete. One ant beats the nestmate’s body very lightly and rapidly with its antennae. When it gets close to its nestmate, its goal here is to bring the chemical signals as close as possible to the other. As a result, it will be able to detect and follow the odor trail its friend has just laid and reach the food source.

The most striking example that may be set forth for tactile communication is the exchange of liquid food from the crop of one ant to the alimentary tract of another. In an interesting test made on this subject, various parts of the bodies of worker ants of the Myrmica and Formica species were stimulated by human hair and were thus successfully induced to regurgitate. The most susceptible ant was the one that had just finished a meal and was looking for a nestmate with whom to share its crop content. Researchers noted that certain insects and parasites were aware of such tactics and they were having themselves fed by practicing this method. What the insect had to do to attract the ant’s attention was just to touch the ant’s body slightly with its antenna and its front leg. Then the touched ant would share its meal, even if the creature in contact with it is of a different type.

The ability of an ant to understand what the other one wants by a short antenna contact shows that the ants may, in a sense, “speak” among themselves. How this “antennal language” used among ants is learned by all ants is another subject to think about. Are they undergoing training on this subject? To talk about the existence of such training, we must also talk about the existence of a superior Almighty Who provides it. Since it cannot be the ants who can provide such a training, this Almighty is Allah Who, by way of inspiration, teaches all ants a language with which to communicate.

The sharing behavior practiced among ants is a specimen of self-sacrifice that cannot be explained by the theory of evolution. Some evolutionists who see the adage “Big fish swallow small fish” as the key to life on earth are forced to withdraw such words when confronted with such self-sacrifice as is displayed by ants. In an ant colony, instead of the “big ant” developing by eating the “small ant”, it rather attempts to feed the “small ant” and make it grow. All ants are ready to accept the food – that is, the “provision” – given to them and definitely make sure to share the excess with other members of the colony.

As a result, what all these examples show us is that the ants are a society of living beings who have submitted to the will of the Creator and who act under His inspiration. Therefore, it would not be right to regard them as organisms which are totally unconscious, because they do have a consciousness which reflects the will of their Creator. Indeed, Allah draws attention in the Qur’an to this interesting fact and notifies us that all living things are, in fact, a community among themselves, that is, they live under a Divine order and in accordance with inspiration.

“There is not an animal that lives on the earth, nor a being that flies on its wings, but forms communities like you. We have not omitted anything from the Book, and they will be gathered to their Lord.” (Al-An`am, 38)