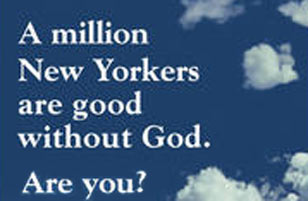 “A million New Yorkers are good without God. Are you?”

This is one of the surprise questions that would greet New York commuters on the subway. A coalition of eight atheist organizations has purchased a month-long campaign that would place their posters in a dozen busy subway stations throughout Manhattan.

This is “part of a coordinated multi-organizational advertising campaign designed to raise awareness about people who don’t believe in a “god”, according to a statement from the group, the Big Apple Coalition of Reason. (Atheist ads to adorn New York subway stations, last accessed 24 October 2009)

The executive director of the New York Center for Inquiry, one of the associated atheists, explained that the coalition hopes “to encourage talking and thinking about religion and morality.”

As believers in Islam, we do welcome talking and thinking about religion and morality. And thinking of religion, we need to, first of all, confront the question of the existence of God:

If we just pass our eyes over the phenomena of nature with attention, we see a regularity and order in all things. We can see this, for instance, in the rotation of the day and night, in the new moon and the full moon, and in the change of seasons. We see the same pattern in the birth, growth and decay of plants and animals.

In short, we can very clearly observe that everything in nature follows an order or a regular pattern, which naturally presupposes a plan or design behind it. But if there is a design, shouldn’t there be a designer? Our reason tells us and our experience teaches us that a plan or design can come only out of an intelligent being.

And if so, how can we look at the grand design of the universe, the unerring order and regularity in nature, and say that these are mere coincidences?

Most assuredly, ours is a universe of order; it is a cosmos and not a chaos. Unless there is a reliable order, or a systematic predictability of laws governing the working of the universe, how can researchers do experiments and arrive at the laws of nature or laws of science?

The foregoing means that behind the operations of this universe, there must be a grand design that is the product of an extraordinary intelligence that comprehends and transcends all the areas of human knowledge, wisdom, and experience.

And what is more, we find that the unity and the uniformity of the Laws of Nature unerringly point to the unity of the power behind the universe. In short, if we are prepared to set aside all our prejudices, and let our minds free for reason to operate freely, we can recognize the overwhelming presence of God in all aspects of the universe.

The Importance of Religion in Life

Indeed, Islam is a complete system covering all aspects of socio-political life as well as individual life, as embodied in the Qur’an and the Sunnah (the example of Prophet Muhammad). But such a complete system is visualized only under a government organized and run on the principles of Islamic jurisprudence.

But apart from it, there are politically or economically motivated groups among Muslims now, whom the media wrongly depicts as models of “organized Islam”.

One criticism of religion in this age is that it causes a lot of violence and intolerance. In fact, violence is not caused by religion as such. It is indeed an aspect of the human psyche, most evident in the socio-political sphere of life.

An objective study will convince us that most of the persisting conflicts of the world today are born out of some complexity of a political-economical nature, rather than from religion.

But vested interests often muddle the issue. For instance, to consider the Palestinian problem from a religious point of view is to distort the vital aspects of the problem, namely the Palestinians are denied their birthright to their home, to their land and their life. Even Israelis who quote their religious book as the basis of their claim to Palestine simply exploit their religion for political advantage.

Today the majority of refugees worldwide happen to be Muslims, and so often this situation is blindly attributed to the religion of Muslims. The truth is that racism, xenophobia, and morbid fear-mongering manipulate public opinion to equate refugees with illegal migrants and even terrorists. Such attitudes create misperceptions about Muslims and Islam. Why can’t we recognize the simple fact that refugees are the victims of state terrorism in the first place?

The Islamic Declaration of Human Rights — formulated on the basis of the Qur’an and the example of Prophet Muhammad — declares that every human being running away from persecution has the right of asylum, and deserves protection.

We can see that it is often the ethnocentrism of certain communities that generates violence, rather than religion. But essentially religion teaches peace, cooperation, and sacrifice. Consider for instance the Qur’anic verses:

Do no mischief on the earth, after it has been set in order, but call on Him with fear and longing (in your hearts): for the mercy of Allah is (always) near to those who do good. (Al-A`raf 7:56)

…But do you good, as Allah has been good to you, and seek not (occasions for) mischief in the land: for Allah loves not those who do mischief. (Al-Qasas 28:77)

Indeed, the moral worth of a society depends on the righteousness of the individuals who comprise that society. And an Islamic society is one in which the individual citizens of the society live by the tenets of Islam.

Regarding religion, one question that haunts thinking humans is about the meaning of suffering. Islam offers a satisfactory answer to this question, which is: If God is good and means well for humankind, why should He allow them to suffer?

Islam teaches that evil, which causes suffering, is the other side of good. That is to say, good in this world cannot exist without bad, as they are two sides of the same coin.

A little reflection would make us see that both good and evil are equally necessary for the spiritual growth of mankind.

Suffering tests the worth and mettle of a person. And the spirits of genuine believers do not weaken under suffering; nor does suffering frighten them or make them desperate.

The superiority of Islam over other philosophies or ideologies can be seen in that it equips its adherents with the spiritual strength to confront evil and overcome suffering. A sincere Muslim accepts physical pain, disease, and personal loss of life or property, as unavoidable tests of this life and as a means of purification; and so he or she strives to overcome them with an equal temper of mind.

As sensible beings, we ought to understand that as humans we are weak beings unable to control even our day-to-day affairs. As such, what can we really do when we are faced with situations that are beyond us? The only course open is not to lose hope, but to rely on the infinite mercy of God.

We should use our reason to assess the problems facing us, and do what we can by way of solving them. Having trust in God, we must adopt a policy of patient perseverance in the face of calamities:

O you who believe! seek help with patient perseverance and Prayer; for Allah is with those who patiently persevere. (Al-Baqarah 2:153)

Islam gives its followers the confidence that God’s mercy is all-pervading, and that He fulfills the smallest need of the lowest creature in the most unexpected ways.

Contentment and tranquility of mind can be attained only through the contemplation of God. God says in the Qur’an what means,

….for without doubt in the remembrance of Allah do hearts find satisfaction. (Ar-Ra`d 13:28)

Is Death the End?

Whatever happiness we enjoy in our life on earth is punctuated by the anxiety about impending death. Even those who are deluded by the idea that they can be “good without God” cannot escape the haunting thought of death.

At the time of death, they have to reckon with the fact that they have to leave their loved ones once and for all. If they still maintain their reason, how can they avoid asking at the point of death: “Has all the glamour and glory of our life come to this? Is this all?”

Indeed, Islam offers a satisfactory answer to the question, “why death?”

Death is only a transitional point in the life of a human being, whereby we leave this temporary world and enter into an eternal world at a different level of existence.

Since this world is imperfect and transient, and our earthly life is short, it is a horrible thought that suddenly one day, all our achievements in the world just vanish before our eyes for good.

As to those who believe and work righteous deeds, they have, for their entertainment, the Gardens of Paradise. (Al-Kahf 18:107)

From the point of view of Islam, God is the perfection of beauty, love, and justice. And the believers’ desire to meet their God in the end gives them the greatest incentive for leading a life of goodness in this world.

There is no way we can avoid facing our God to answer for all our actions on the Day of Judgment. On that day, those of us who led a good life are rewarded with an eternal life of bliss in the hereafter. And those who feel that they can be “happy without God” will necessarily be unhappy in the world to come.

The question is whether it is better to have the opportunity of enjoying an eternal life of bliss, or to miss that chance altogether by following the delusion that we can be happy without God.

The choice is ours.

Taken with slight modifications from onislam.net.

Professor Shahul Hameed is a consultant to the Reading Islam Website. He also held the position of the President of the Kerala Islamic Mission, Calicut, India. He is the author of three books on Islam published in the Malayalam language. His books are on comparative religion, the status of women, and science and human values.