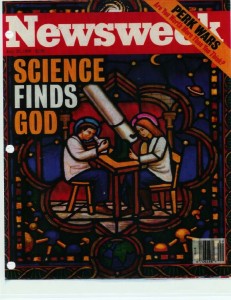 “Theology and science are entering into a new relationship,”

The achievements of modern science seem to contradict religion and undermine faith. But for a growing number of scientists, the same discoveries offer support for spirituality and hints of the very nature of God.

The more deeply scientists see into the secrets of the universe, you’d expect, the more God would fade away from their hearts and minds.

But that’s not how it went for Allan Sandage. Now slightly stooped and white-haired at 72, Sandage has spent a professional lifetime coaxing secrets out of the stars, peering through telescopes from Chile to California in the hope of spying nothing less than the origins and destiny of the universe. As much as any other 20th-century astronomer, Sandage actually figured it out: his observations of distant stars showed how fast the universe is expanding and how old it is (15 billion years or so).

But through it all Sandage, who says he was “almost a practicing atheist as a boy,” was nagged by mysteries whose answers were not to be found in the glittering panoply of supernovas. Among them: why is there something rather than nothing?

Sandage began to despair of answering such questions through reason alone, and so, at 50, he willed himself to accept God. “It was my science that drove me to the conclusion that the world is much more complicated than can be explained by science,” he says. “It is only through the supernatural that I can understand the mystery of existence.”

Something surprising is happening between those two old warhorses science and religion.

Historically, they have alternated between mutual support and bitter enmity. Although religious doctrine midwifed the birth of the experimental method centuries ago (following story), faith and reason soon parted ways.

Galileo, Darwin and others whose research challenged church dogma were branded heretics, and the polite way to reconcile science and theology was to simply agree that each would keep to its own realm: science would ask, and answer, empirical questions like “what” and “how”; religion would confront the spiritual, wondering “why.”

But as science grew in authority and power beginning with the Enlightenment, this detente broke down. Some of its greatest minds dismissed God as an unnecessary hypothesis, one they didn’t need to explain how galaxies came to shine or how life grew so complex.

Since the birth of the universe could now be explained by the laws of physics alone, the late astronomer and atheist Carl Sagan concluded, there was “nothing for a Creator to do,” and every thinking person was therefore forced to admit “the absence of God.” Today the scientific community so scorns faith, says Sandage, that “there is a reluctance to reveal yourself as a believer, the opprobrium is so severe.”

Some clergy are no more tolerant of scientists. A fellow researcher and friend of Sandage’s was told by a pastor, “Unless you accept and believe that the Earth and universe are only 6,000 years old [as a literal reading of the Bible implies], you cannot be a Christian.” It is little wonder that people of faith resent science: by reducing the miracle of life to a series of biochemical reactions, by explaining Creation as a hiccup in space-time, science seems to undermine belief, render existence meaningless and rob the world of spiritual wonder.

But now “theology and science are entering into a new relationship,” says physicist turned theologian Robert John Russell, who in 1981 founded the Center for Theology and the Natural Sciences at the Graduate Theological Union in Berkeley.

Rather than undercutting faith and a sense of the spiritual, scientific discoveries are offering support for them, at least in the minds of people of faith. Big-bang cosmology, for instance, once read as leaving no room for a Creator, now implies to some scientists that there is a design and purpose behind the universe. Evolution, say some scientist-theologians, provides clues to the very nature of God. And chaos theory, which describes such mundane processes as the patterns of weather and the dripping of faucets, is being interpreted as opening a door for God to act in the world.

From Georgetown to Berkeley, theologians who embrace science, and scientists who cannot abide the spiritual emptiness of empiricism, are establishing institutes integrating the two. Books like “Science and Theology: The New Consonance” and “Belief in God in an Age of Science” are streaming off the presses. A June symposium on “Science and the Spiritual Quest,” organized by Russell’s CTNS, drew more than 320 paying attendees and 33 speakers, and a PBS documentary on science and faith will air this fall.

In 1977 Nobel physicist Steven Weinberg of the University of Texas sounded a famous note of despair: the more the universe has become comprehensible through cosmology, he wrote, the more it seems pointless. But now the very science that “killed” God is, in the eyes of believers, restoring faith.

Physicists have stumbled on signs that the cosmos is custom-made for life and consciousness. It turns out that if the constants of nature – unchanging numbers like the strength of gravity, the charge of an electron and the mass of a proton – were the tiniest bit different, then atoms would not hold together, stars would not burn and life would never have made an appearance.

“When you realize that the laws of nature must be incredibly finely tuned to produce the universe we see,” says John Polkinghorne, who had a distinguished career as a physicist at Cambridge University before becoming an Anglican priest in 1982, “that conspires to plant the idea that the universe did not just happen, but that there must be a purpose behind it.”

Charles Townes, who shared the 1964 Nobel Prize in Physics for discovering the principles of the laser, goes further: “Many have a feeling that somehow intelligence must have been involved in the laws of the universe.”

Although the very rationality of science often feels like an enemy of the spiritual, here, too, a new reading can sustain rather than snuff out belief. Ever since Isaac Newton, science has blared a clear message: the world follows rules, rules that are fundamentally mathematical, rules that humans can figure out. Humans invent abstract mathematics, basically making it up out of their imaginations, yet math magically turns out to describe the world. Greek mathematicians divided the circumference of a circle by its diameter, for example, and got the number pi, 3.14159… . Pi turns up in equations that describe subatomic particles, light and other quantities that have no obvious connections to circles.

This points, says Polkinghorne, “to a very deep fact about the nature of the universe,” namely, that our minds, which invent mathematics, conform to the reality of the cosmos. We are somehow tuned in to its truths.

Since pure thought can penetrate the universe’s mysteries, “this seems to be telling us that something about human consciousness is harmonious with the mind of God,” says Carl Feit, a cancer biologist at Yeshiva University in New York and Talmudic scholar.

To most worshipers, a sense of the divine as an unseen presence behind the visible world is all well and good, but what they really yearn for is a God who acts in the world. Some scientists see an opening for this sort of God at the level of quantum or subatomic events.

In this spooky realm, the behavior of particles is unpredictable. In perhaps the most famous example, a radioactive element might have a half-life of, say, one hour. Half-life means that half of the atoms in a sample will decay in that time; half will not. But what if you have only a single atom? Then, in an hour, it has a 50-50 chance of decaying. And what if the experiment is arranged so that if the atom does decay, it releases poison gas? If you have a cat in the lab, will the cat be alive or dead after the hour is up?

Physicists have discovered that there is no way to determine, even in principle, what the atom would do. Some theologian-scientists see that decision point – will the atom decay or not? will the cat live or die? – as one where God can act. “Quantum mechanics allows us to think of special divine action,” says Russell. Even better, since few scientists abide miracles, God can act without violating the laws of physics.

An even newer science, chaos theory, describes phenomena like the weather and some chemical reactions whose exact outcomes cannot be predicted. It could be, says Polkinghorne, that God selects which possibility becomes reality. This divine action would not violate physical laws either.

Most scientists still park their faith, if they have it, at the laboratory door. But just as belief can find inspiration in science, so scientists can find inspiration in belief. Physicist Mehdi Golshani of Sharif University of Technology in Tehran, drawing from the Koran, believes that natural phenomena are “God’s signs in the universe,” and that studying them is almost a religious obligation. The Koran asks humans to “travel in the earth, then see how He initiated the creation.” Research, Golshani says, “is a worship act, in that it reveals more of the wonders of God’s creation.”

The same strain runs through Judaism. Carl Feit cites Maimonides, “who said that the only pathway to achieve a love of God is by understanding the works of his hand, which is the natural universe. Knowing how the universe functions is crucial to a religious person because this is the world He created.” Feit is hardly alone.