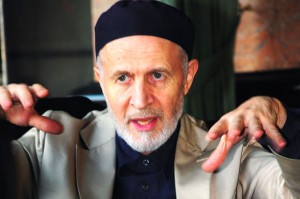 Having photographed almost every famous person in the music industry I got bored and started getting into spiritual things. I just wanted something else

Peter Sanders was born in London in 1946. His professional career in photography began during the mid-sixties where he photographed most of the major stars in the music business including Bob Dylan, Jimi Hendrix, The Doors, The Who, the Rolling Stones etc. Towards the end of the 1970’s, Sanders’ attention turned inward which set him on a spiritual search to India and then eventually to the Muslim world where the spiritual beauty of Islam left an indelible impression upon him. After his return to England, he embraced Islam and was given the name Abd al-Adheem. In 1971 he was granted the unique opportunity to photograph the rituals of Hajj or annual Muslim pilgrimage to Mecca. These images appeared in the Sunday Times Magazine, The Observer, among many other major journals in recognition of their rareness.

For Peter Sanders, faith and photography have both been part of his spiritual development. It was his search to capture the essence of reality that led him to Islam and, with camera in hand, to the door of the Ka`bah. From photographing the most famous of idols in the music industry to the most sacred places in the Islamic world, Peter Sanders’ journey encompasses more than a change of focus for his camera lens.

“Having photographed almost every famous person in the music industry I got bored and started getting into spiritual things. I just wanted something else, and so I decided to go to India. I packed everything up and went, looking for a teacher. Eventually I found one, who was basically a Hindu but had a lot of what we consider ‘Muslim Qualities’. I studied with him for about six months and when I came back to England, some of my friends had become Muslim. Then there were other friends who had gotten heavy into drugs and alcohol. It was as if God was saying to me, ‘which direction do you want to go?’

“I didn’t know very much about Islam but I had dreams and various other things happened to me. So I made a decision to become Muslim without knowing too much about it. I was 24 years old at the time and within three months of becoming Muslim, I decided to go on Hajj. I didn’t have the money but I just made the intention. My elderly Muslim teacher at that time had also made the intention and I knew that I wanted to go too. Someone gave me a ticket and I went. It was at the Ka`bah that I learnt that my teacher had died on the way.”

At the time, back in 1971, photographs of the Hajj were quite rare. Peter Sanders was granted special permission to photograph the sacred places; a decision that still amazes him. “It was pretty unique for a Westerner to have taken pictures of the Hajj. I had to move from offices to offices in Jeddah and Makkah and eventually I found a man that had the authority to grant me permission. A lot of people didn’t want to take responsibility at the time, and they were generally not too keen on photography anyway, especially by a convert. But this man was in a position to authorize me and he did so purely on trust.”

For Peter Sanders, photography is essentially a means to capture the spirit of Islam. As he describes his efforts to do this, the words of an Urdu poet come to mind: ‘To see the reality of Madinah you need more than just sight; you need vision’. As if seeking to possess this vision is not a great enough mission in itself, Peter Sanders attempts to then convey it to others. He has spent the last thirty years documenting the remains of traditional Islamic societies that are fast disappearing from the earth. One of his ongoing projects in trying to capture dying traditions has been the compilation of a photographic album of the great scholars and saints of our time. The two volumes, that he hopes to raise funds to publish, include pictures of people who were photographed for the first time and some of whom have passed away in recent months and years.

Peter Sanders, internationally recognized as one of the world’s leading photographer of the Islamic World.

The photographer began his career in the mid-1960’s covering London’s seminal rock and roll scene, capturing now legendary music icons in a collection that is considered a classic by collectors.

Towards the end of the 1970’s, Sanders’ attention turned inward which set him on a spiritual search that took him to India and led him in the end to the Muslim world. All the while the photographer captured his surroundings on film, creating a striking and disparate record of the last vestiges of traditional Muslim societies in transition. Sanders’ own deep commitment to and love of traditional Islamic culture has brought him into intimate contact with people and places few photographers reach.

“My photography has always been an extension of my life,” he said. “Photography is a wonderful process – a gift from God – that has allowed me to learn so much about myself and the world around me. It’s like chasing a moment, trying to capture a beautiful bird in flight.” “The photographs are extremely, extraordinarily beautiful,” claims Japanese Art Critic, Tsuyoshi Kawasoe.

“One should not underestimate the importance of Peter Sanders’ work,” said American writer Michael Sugich. “He is the only photographer working today who has systematically and with great devotion to the task, covered vast areas of the Islamic world as an insider. Because of his deep understanding of the culture and his impeccable spiritual courtesy, he has been able to photograph places and people that virtually no western photographer would be able to access. He has left an indelible, poetic and ravishing record of an extraordinary time and a rich and fascinating culture.”

It has also been quoted, “he captures the spiritual beauty of creation itself.”

Sanders’ photographs have appeared in many international publications, including Time Magazine, Paris Match, The Observer, The Sunday Times Magazine, Aramco World and the London based pan-Arab news magazine Al Majalla who published his work as a cover story.

His intimate photographs of the sacred cities of Makkah and Madinah are in great demand.

Peter Sanders Photography Limited includes travel, location and studio photography, a photographic library of over 120,000 slides, as well as the production of fine art prints.

This year will see the publication of his first photographic book, ‘In the Shade of the Tree.’ Another three are in mid-production, including one about the Muslims in China.

In the Shade of the Tree: A Photographic Odyssey through the Muslim World.

This article has been taken with permission and slight editorial modifications from www.IslamReligion.com.