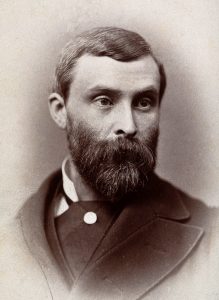 It became so abhorrent to me that I almost became a sceptic.

I am deeply grateful for this opportunity of saying a few words as to why I embraced Islam. I was reared under the influence of Christian parents. At an early age, I became interested in theology. I associated myself with the Church of England and took an interest in Mission work without an actual active part in it. Some years ago I gave my attention to the doctrine of “Eternal Torment” of all mankind except a few elects. It became so abhorrent to me that I almost became a sceptic.

I reasoned that a God that would use His power to create human beings whom he foreknew and pre-destined should be Eternally Tormented, could be neither wise, just, nor loving. His standard would be lower than that of many men. I continued, however, to believe in the existence of God, but was not willing to accept the commonly understood teachings of God’s revelation of Himself to men. I then turned my attention to the investigation of other religions, only to feel baffled.

An earnest desire to worship and serve the True God grew in me. The creeds of Christianity claim to be founded on the Bible, but I found these to be conflicting. Is it possible that the Bible and teaching of Jesus Christ had been misrepresented? So, I turned my attention again to the Bible and determined to make a careful study, and I felt that there was something wanting.

I determined to strike out for myself ignoring the creeds of men. I began to teach that men possessed a “Soul”, and an “Unseen Force” which was immortal, that sins were punished both in this world and in the next, that God in His Goodness and Mercy was ever ready to forgive our sins if we only were truly repentant.

Realizing the necessity of living up to the Truth and digging deep, so that I may find the “pearl of great price”, I again devoted my time to the study of Islam. There was something in Islam which appealed to me at this time. In an obscure and almost unknown corner of the village Ichhra, I was devoting my time and service to God’s glory amongst the lowest classes of society with the earnest desire to uplift them to the knowledge of the True and only god and to instil a feeling of brotherhood and cleanliness.

It is not my intention to tell you as to how I laboured amongst these people, nor what were the sacrifices I had under-taken nor the extreme hardships I had undergone. I was simply going on with a singleness of purpose to benefit these classes both physically and morally.

I eventually took up the study of the life of Prophet Muhammad. I knew very little of what he did, but I knew and felt that the Christians with one voice condemned the celebrated Prophet of Arabia. I was now determined to look into the matter without the spectacles of bigotry and malice. After a little time, I found that it was impossible to doubt the earnestness of his search after Truth and God.

I felt that it is wrong, in the extreme, to condemn this Holy Man after reading his great achievements for humanity. People who were wild idol-worshippers, living on crime, filth and nakedness, he taught them how to dress, filth was replaced by cleanliness, and they acquired personal dignity and self-respect, hospitality became a religious duty, their idols were destroyed and they worship the True and only one God. Islam became the most powerful Total Abstinence Association in the world. And many other good works were accomplished which are too numerous to be mentioned.

In the face of all this and his own purity of mind, how sad to think that such a Holy Messenger of God should be run down by the Christians. I became deeply thoughtful, and during my moments of meditation an Indian gentleman named Mian Amiruddin came on a visit, and strangely enough, it was he who fanned the fire of my life into a flame. I pondered over the matter a great deal; brought one argument after the other bearing upon the Christians’ present-day religion and I concluded in favour of Islam, feeling convinced of its truth, simplicity, toleration, sincerity and brotherhood.

I have now but a little time to live on this earth and I mean to devote my all to Islam.

This article is taken with due reference and slight editorial modifications from discoveringislam.org.