The Logic of the Qur’an Led Me to Islam 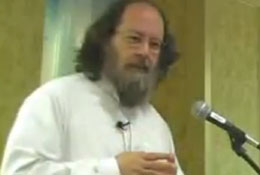 It is my pleasure to be with you here today to speak about the Qur’an.

Actually, my own experience with the Qur’an is what led me to eventually become a Muslim.

So that’s why I get great pleasure to speak in particular to non-Muslims about the Qur’an, and try to introduce them to the Qur’an so that maybe they can share some of the same experiences and the same feelings that I had towards the Qur’an.

So I came from an American, traditional American I guess, Christian background, and so when I started to read and study about Islam that was the background that I was coming from.

There are many aspects of the Qur’an that affected me in many ways. And one of the first aspects that I think is very important has to do with the preservation of the Qur’an.

Because if we are going to speak about following, if we are going to say that we believe in God and we agree upon the fact that we believe in God, and even if we accept the fact or the concept of revelation from God, and if we want to follow this revelation, one of the first and most important aspects is that we have to have a strong reason to believe that this revelation has actually been preserved in its original source.

It does not make any sense really to say that I’m going to follow God’s revelation when we realize or when we know that what we are holding in our hands perhaps has not been preserved, or may have good reason to believe that it hasn’t been preserved.

So, one of the first things that stuck out to me with respect to the Qur’an has to do with preservation of the Qur’an.

And as I said this was a very significant point for me because I had actually studied the history of the Bible before that time, and obviously I’m not going to get into details of that kind of discussion here, but I can just say that the history of the Qur’an is completely different from the history of the Bible, and from the earliest days this Qur’an was known and recognized and preserved. It was not compiled by later counsels some two or three hundred years after the time of Prophet Muhammad.

So this is one thing that stood out to me, and as I said this was of great significance to me in the sense that if we are going to follow something that’s coming from God then we have to make sure that what we have is actually that thing that came from God.

An Invitation to Think and Ponder

In addition, the thing that God is calling humankind to in the Qur’an is as the Muslim scholars say is actually something that is consistent with their nature. It is something that is understandable to the human being because this is actually the natural way that human beings have been created. Therefore, God throughout the Qur’an tells you to ponder over creation and think about things and this call and this argument and the conclusion of it is that you will recognize that fact that there is actually only one Creator and that this Creator deserves the worship and so forth.

Therefore, therefore there is no leap of faith in Islam. The definition of faith in Islam from an Islamic perspective, from a Qur’anic perspective, is not to believe in something that you cannot prove. Many people in the west when they think of faith when you tell them about belief or something that there is a mystery or something that you cannot prove and so forth. This is not the way of the Qur’an. The Qur’an is calling people to a truth that they can recognize, a truth that they can understand. Moreover, as I said Muslim scholars explained this by the fact that this truth is actually, what their own human nature is all about. This is what their soul is seeking.

And at the same time also some of the differences between the Qur’an and the Bible in particular, and this by the way is not supposed to be a critique of the Bible or Christianity or Judaism or whatever, but since they asked me to speak about the Qur’an and this is my own experience I felt this is the best way to express myself.

At that time when I was a non-Muslim, most of the books that I was reading about Islam were actually by non-Muslims. And some of the things that they were claiming about the Prophet Muhammad is that most of the Qur’an, what they say that he just stole from the Bible stole from the Christians and the Jews that he knew before and so forth. Actually, the differences between the Qur’an and the Bible is another aspect that influenced me greatly.

In addition, I would just like to highlight for example the issue of the nature of God. All the Qur’an is about God. In addition, if you think about God and His attributes and so forth as the Qur’an explains it, you will get a very clear picture of who it is that you are worshiping, and you get a clear picture of the kind of excellence and greatness of this object of worship. Therefore, when you read for example passages in the Old Testament and compare them to what you find in the Qur’an, you find that if the Prophet Muhammad was really stealing from the Bible, it is amazing that the Prophet Muhammad was very selective in stealing from the Bible!

For example, in the story of Adam and Eve you find the story also in the Qur’an. You find that they were told not to eat from a tree, but the Qur’an does not say it was the tree of knowledge. It did not say that God was afraid that humans if they eat from that tree would compete with God. However, just said they were forbidden to eat from a tree and they ate from that tree. Then God came to them, spoke to them, and taught them words of repentance like what we find in the Bible.

The teachings about God in the Qur’an as I said will teach you about the real attributes of God. You will not find anything similar for example to Jacob wrestling with God and Jacob defeating God in a wrestling match, or similar kinds of things you find especially throughout the Old Testament. Or another important one in the Old Testament is God repenting of the evil that He himself committed, that you find in Exodus 30:2-14…