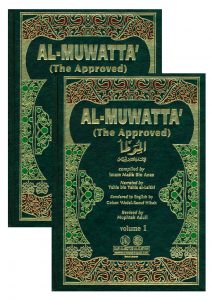 Imam Malik said: “Tell them Malik ibn Anas says he does not know.”

Muslims follow four major schools of jurisprudence in matters of legal and devotional details. Imam Malik Ibn Anas, may Allah have mercy upon him, comes second in order from a chronological point of view. For Malik ibn Anas, who is known as the scholar of Madinah, was born in Madinah in the year 93 A.H.

Imam Malik’s mother advised him to join the first school and university in Islam, the Mosque of the Prophet in Madinah, where he started by memorizing the Glorious Qur’an and then the Hadith [traditions of Prophet Muhammad (may Allah exalt his mention)]. In the age when writing and written educational material were a rarity, students and scholars had to have a strong memory to consult and store the knowledge they gained. Imam Malik was not lacking in this special ability. We are told that when he listened to a teacher narrating Prophetic traditions, Malik ibn Anas used to tie a knot for each tradition (Hadith). Later, he tried to recite the traditions to himself in order to make sure that he retained every single one. Once he attended a session where 30 Hadiths were narrated and discussed. When the session was over he checked his retention of those Hadiths and found that he forgot one of them. So he rushed after his teacher to learn the missing Hadith from him, the teacher listened to him, and taught him the one he had missed.

As an eminent scholar, he not only attended study circles held by no less than 90 scholars, but throughout his life he discussed different matters of the faith with his colleagues and the scholars who came to Madinah during the Hajj (pilgrimage) season, in addition to corresponding with well-known authorities in various parts of the Muslim world. We are told that Malik ibn Anas started teaching in the Prophet’s Mosque very early in his life (late teens or early twenties), but he did not start teaching until his command of religious learning was witnessed to by no less than seventy of his teachers, some of whom came to attend the teaching sessions of their former student to learn from him.

As a conservative traditionalist, Imam Malik as a teacher in his mosque had great reverence for the Hadiths of the Prophet (Peace and blessings be upon him). History tells us that before Imam Malik embarked upon teaching the Hadith, he would have a bath and wear his best clothes, and he would not allow anyone to raise his voice too high. It is also reported that he would not ride in Madinah, saying that he could not see himself riding in a town where the Prophet (Peace and blessings be upon him) was buried.

Since Imam Malik lived ninety years he witnessed the change of the Umayyad Dynasty to the Abbasid, and he met many a Caliph whose respect he commanded with his knowledge and sincere advice, in addition to his dignity as a scholar. We are told that when the famous Caliph Harun Ar-Rashid learnt about Al-Muwatta’ (a book compiled by Imam Malik), he sent his minister to fetch him in order to read the book to the Caliph. Imam Malik politely answered, “Give my regards to the Caliph, and tell him that knowledge should be visited, and it should not visit people. People should come to it, and it should not go to people.” Later, when the Caliph blamed Imam Malik for disobeying him, he said to the Caliph: “O Leader of the Faithful, Allah the Almighty has raised you to this honorable position. Do not be the first one to lower the place and insult the dignity of knowledge and learning so that Allah may not lower your place. I did not really want to disobey you, but I rather wanted the Leader of the Faithful to show due respect to learning in order that Allah may raise his position.” Caliph Harun Ar-Rashid was convinced, and he walked along with Imam Malik to his own house to listen to him and to his readings from his book.

Another quality typical of the knowledgeable heroes of Islam, which Imam Malik taught to people through word and action, was humility and confession to ignorance of matters of which he was not certain. He emphasized to his students that the most important expression a true scholar should have the courage to say was, “I do not know.” In fact, we are told that a man came to Imam Malik and informed him that he had travelled for six months to ask him about a certain problem. Upon hearing the problem Malik could not find a satisfactory answer. So he humbly told the man, “I do not know.” The man was surprised, and he said, “What shall I tell my folk when I go home.” Imam Malik said: “Tell them Malik ibn Anas says he does not know.”

It was with this sense of responsibility that Imam Malik taught people and gave his religious verdict (fatwa), despite the fact that he collected more than 100,000 Prophetic traditions (Hadith) and studied at the hands of scores of well-known authorities on religious matters. We read that very often (as a conscientious advisor) he would ask the inquirer to wait for sometime before he gave him the answer to his question.

Malik ibn Anas is specially recognized for his voluminous book ‘Al-Muwatta’, which is said to be the second compilation in Islamic history of religious teachings. It was compiled, according to some historians, in 40 years. Today, that book is still a major guiding authority for millions of Muslims in Northern and Sub-Saharan Africa, where the “Malikite School ” is dominant.

Imam Malik was a very devout, Allah-fearing person. He lived a life of self-denial and abstinence. He often fasted, sometimes about four days in the week. He died in 170 A.H.