Only the Enemies Win! 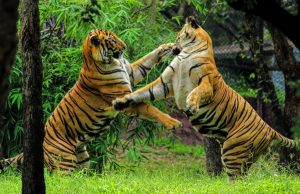 In a battle between brothers, no one wins! [Image by Karthik Easvur]

Ibn Qutaibah narrated in his four-volume masterpiece, Eyes of the News, what follows:

During the fierce fight that broke out between Abdul Malik ibn Marwan and Abdullah ibn Al-Zubair, the Roman influential and prominent figures went to their Emperor and said: “The Arabs are fighting one another; it is a golden opportunity for us; it is the right moment for us to launch our massive attack against them!”

However, assured as he was, the Emperor replied: “You should never think about that!”

The prominent figures were astonished at the Emperor’s reply and, thus, asked him “But, why?”

Upon the Emperor’s orders, two dogs were brought into the court before him and all of the present figures. Being incited and provoked to attack each other, the dogs started a round of fierce fight, biting and mauling each other. Meanwhile, the Emperor called for a fox which was thrown before the two dogs. Upon seeing the fox, the two dogs stopped fighting and all of a sudden attacked the former and mauled him to death!

Upon this, the Emperor commented: “This is very similar to our case with those Arabs; if we attack them, they will, all of them, unite and join their forces against us. However, if we let them as they are – as fighting one another – they will finish off one another!

The moral of the story is clear and self-explanatory indeed. It needs neither further clarification nor commenting. However, one may say that history repeats itself. Or, more precisely, so as not to do history any injustice, it is we who do not learn from the lessons of history and we tend to repeat the same thing each time though the results are already known and have been witnessed before… repeatedly and recurrently!

In a battle between brothers, no one wins!

Your brother’s defeat is your own defeat even if it was you who defeated him!

Your brother’s victory is your victory even if he achieved only it by himself!

During the pre-Islamic era, the Arabs were on the sidelines of civilization, influence, and progress as they were nothing but rival warring tribes, their adversity among themselves was very great, and they used to draw their swords for pasture, water, and a few bites of food! They had neither a cherished principle nor a sought mission. Most of the time, their swords were drawn for the sake of others, what can be called “a proxy war” if we use a modern term. The Arabs of the Levant were the unsheathed swords of Hercules, while the Arabs of Yemen were the swords of Khusrau.

However, the Arabs became masters of humanity and bearers of the torch of progress and civilization only when they sheathed their swords and stopped their local and internal fights against one another. They became masters over all others when they drew their swords in the face of their enemies and became as one block against all their foes and enemies. Only then the great empires of the time collapsed before their feet and, thus, the servant became the master, and the old masters became nothing but servants!

The Muslim liberation wars (Al-Futuhat Al-Islamiyyah) never stopped save for an internal struggle, and we have never lost a territory save when that territory was marginalized by us in one way or another. We have never lost a territory to our enemies unless it was first weakened by our own disputes before it was chopped off by the swords of our enemies. Al-Andalus (now Spain) did not fall by the swords of the Spanish until it fell by the many rulers of little Muslim territories and the Emirs of the warring cities. The Spanish only fired the bullet of mercy. Hulagu, the Mongol ruler, did not seize Baghdad until it fell at the hands of its Muslim rulers many years before the former’s appearance. They helped it fall with their disputes and domestic wars. When Hulagu came, he found the way paved for him to conquer and finish it off!

Last but not least, whoever repeats the failed incidents of history, will get the same results. Today, we are weak not because our enemies are strong, but because we are a scattered nation and warring tribes. Is there any heedful person who can learn from the lessons of history and make up his mind that he will never repeat the same mistakes again?! Hope so!

Dr. Ali Al-Halawani is Assistant Professor of Linguistics and Translation, Kulliyyah of Languages and Management (KLM), International Islamic University Malaysia (IIUM), Kuala Lumpur, Malaysia. He was Assistant Professor and worked for a number of international universities in Malaysia and Egypt such as Al-Madinah International University, Shah Alam, Malaysia (Mediu) and Misr University for Science & Technology (MUST), Egypt; Former Editor-in-Chief of the Electronic Da`wah Committee (EDC), Kuwait; Former Deputy Chief Editor and Managing Editor of the Living Shari`ah Department, www.islamOnline.net; Member of the International Union of Muslim Scholars (IUMS); and member of the World Association of Arab Translators & Linguists (Wata). He is a published writer, translator, and researcher. You can reach him at alihalawani72@hotmail.com. You may find his latest book titled: Aspects of ARABIC & Translation of THE QUR’ÂN on https://www.amazon.com/dp/9671582001.

You may also visit his page on Amazon.com: https://www.amazon.com/ALI-AL-HALAWANI/e/B07BP83RPP/ref=dp_byline_cont_book_1