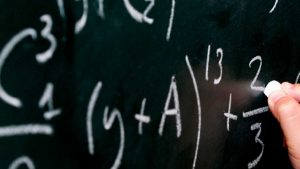 Muslim mathematicians were the first people to write numbers the way we do, and, although we are the heirs of the Greeks in geometry, part of our legacy from the Muslim world is our arithmetic. This is true even if it was Hindu mathematicians in India, probably a few centuries before the rise of Islamic civilization, who began using a numeration system with these two characteristics:

These two properties describe our present system of writing whole numbers, and we may summarize the above by saying the Hindus were the first people to use a cipherized, decimal, positional system, “Cipherized” means that the first nine numbers are represented by nine ciphers, or digits, instead of accumulating strokes as the Egyptians and Babylonians did, and “decimal” means that it is base 10. However, the Hindus did not extend this system to represent parts of the unit by decimal fractions, and since it was the Muslims who first did so, they were the first people to represent numbers as we do. Quite properly, therefore, we call the system “Hindu-Arabic”.

As to when the Hindus first began writing whole numbers according to this system, the available evidence shows that the system was not used by the great Indian astronomer Aryabhata (born in A.D. 476), but it was in use by the time of his pupil, Bhaskara I, around the year A.D. 520. (See Van der Waerden and Folkerts for more details.)

News of the discovery spread, for, about 150 years later, Severus Sebokht, a bishop of the Nestorian Church ( one of the several Christian faiths existing in the East at the time), wrote from his residence in Keneshra on the upper Euphrates river as follows:

I will not say anything now of the science of the Hindus, who are not even Syrians, of their subtle discoveries in this science of astronomy, which are even more ingenious then those of the Greeks and Babylonians, and of the fluent method of their calculation, which surpasses words. I want to say only that it is done with nine signs. If those who believe that they have arrived at the limit of science because they speak Greek ad known these things they would perhaps be convinced, even if a bit late, that there are others who know something, not only Greeks but also men of a different language.

It seems, then, that Christian scholars in the Middle East, writing only a few years after the great series of Arab conquests had begun, knew of Hindu numerals through their study of Hindu astronomy. The interest of Christian scholars in astronomy and calculation was, in the main, due to their need to be able to calculate the date of Easter, a problem that stimulated much of the Christian interest in the exact sciences during the early Middle Ages. It is not a trivial problem, because it requires the calculation of the date of the first new moon following the spring equinox. Even the great nineteenth-century mathematician and astronomer C.F. Gauss was not able to solve the problem completely, so it is no wonder that Severus Sebokht was delighted to find in Hindu sources a method of arithmetic that would make calculation easier.

We can perhaps explain the reference to the “nine signs” rather then the ten as follows: the zero (represented by a small circle) was not regarded as one of the digits of the system but simply a mark put in a place when it is empty, i.e. when no digit goes there. The idea that zero represents a number, just as any other digit does, is a modern notion, foreign to medieval though.

With this evidence that the Hindu system of numeration had spread so far by the year A.D. 662, it may be surprising to learn that the earliest Arabic work we know of explaining the Hindu system is one written early in the ninth century whose title may be translated as The Book of Addition and Subtraction According to the Hindu Calculation. The author was Muhammad ibn Musa al-Khwarizmi who, since the was born around the year A.D. 780, probably wrote his book after A.D. 800.

We mentioned in Chapter 1 that al-Khwarizmi, who was one of the earliest important Islamic scientists, came from Central Asia and was not an Arab. This was not unusual, for, by and large, in Islamic civilization it was not a man’s place (or people) of origin, his native language, or (within limits) his religion that mattered, but his learning and his achievements in his chosen profession.

The question arises, however, where al-Khwarizmi learned of the Hindu arithmetic, given that his home was in a region far from where Bishop Sebokht learned of Hindu numerals 150 years earlier. In the absence of printed books and modern methods of communication, the penetration of a discovery into a given region by no means implied its spread to adjacent regions. Thus al-Khwarizmi may have learned of Hindu numeration not in his native Kharizm but in Baghdad, where, around 780, the visit of a delegation of scholars from Sind to the court of the Caliph al-Mansur led to the translation of Sanskrit astronomical works. Extant writings of al-Khwarizmi on astronomy show he was much influenced by Hindu methods, and it may be that it was from his study of Hindu astronomy that he learned of Hindu numerals.

Whatever the line of transmission to al-Khwarizmi was, his work helped spread Hindu numeration both in the Islamic world and in the Latin West. Although this work has not survived in the Arabic original (doubtless because it was superseded by superior treatises later on), we possess a Latin translation, made in the twelfth century A.D. From the introduction to this we learn that the work treated all the arithmetic operations and not only addition and subtraction as the title might suggest. Evidently, al-Khwarizmi’s usage is parallel to ours when we speak of a child who is studying arithmetic as “learning his sums”.

This article is excerpted from the book “Episodes in the Mathematics of Medieval Islam” by J. L. Berggren.