The Story of Sibawayh: The Imam of Grammarians 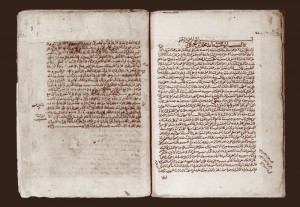 After his death, one of his students took it upon himself to make this book available to the public.

How often we frown at ourselves when we make mistakes in life, and indeed how often we become disheartened when we fall into error! But, yet, how little we realize that sometimes it’s these small mistakes that shape our lives and renew our focus. The Predestination of Allah is certainly amazing in that a failure on one day can become the cause of our triumph on another.

When a single mistake leads you to become an Imam (leader) for the Ummah… this line summarizes the whole story of Sibawayh, the Imam of all grammarians.

He is `Amr ibn `Uthman ibn Qinbar (Abu Bishr) originally from the lands of Persia. Sibawayh was a nickname given to him by his mother, meaning, “the scent of apples.”

Sibawayh at the beginning of his youth sought knowledge in the field of hadith. He studied with the likes of Hammad, the famous muhaddith in Basra, and it was here with Shaykh Hammad that a particular incident took place which changed Sibawayh’s entire focus.

One day Hammad (May Allah rest his soul) asked him to read out a hadith and Sibawayh began by saying: “ليس من أصحابي أحد إلا ولو شئت لأخذت عليه ليس أبا الدرداء…”  – however, he read Aba as: Abu in a state of raf` (nominative) thinking that it was the Ism of Laysa. Hammad al-Basri corrected him and said, أخطأتَ يا سيبويه إنما هو استثناء – ‘You’re mistaken O’ Sibawayh, it is in fact an Exception,’ (i.e. meaning: ‘… except for Abu al-Darda’). So Sibawayh said, لأطلبنّ علما لا يُنازعني فيه أحد – ‘I will certainly seek knowledge [grammar] such that none can dispute with me therein.’

So he traveled to the learned scholars and grammarians of his time in Basra and studied extensively with the famous al-Khalil ibn Ahmed al-Farahidi (who established `ilm al-`Aroud; prosody) and other grammarians such as al-Akhfash. It was here that Sibawayh established the foundations of grammar for the people and wrote his huge scholarly work ‘al-Kitab.’ However, at the time, he did not release it to the people. It is stated that he would travel through towns and villages, sitting with the folks and recording their poetry as well as historical statements (handed down through tribes) in an attempt at gathering shawahid (linguistic evidences) for each point and argument that he mentioned in his book.

After his death, one of his students took it upon himself to make this book available to the public. Not only did his book benefit the people of Basra, but it thereafter became one of the greatest books on grammar to have ever been written in history, such that the people began to call it: Qur’an al-Nahw (the ‘Qur’an of Grammar’).

Sibawayh (May Allah rest his soul) died at the young age of 34, but despite that, the Ummah to this day has not stopped benefiting from his book and the knowledge which he left behind.

This really highlights out (particularly for the students amongst us) that sometimes you may wish for one thing but Allah has wished for something else – better than what you perceive. So be patient and ask your Lord for guidance in all affairs and who knows, one day you may become a leader for the righteous in one thing or another!