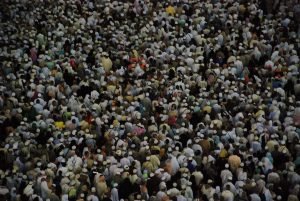 The Woman Who Founded Hajj Rites

The days of Hajj are a remembrance of great events – The Hajj rites have their roots deep in the history of God’s noble Prophets from the time of Abraham to the time of Muhammad (peace be upon them all).

Our Hajj, as a consequence, affirms in our hearts the strong connection that exists between all of the Prophets while reminding us of the great sacrifices they all had made for the guidance of the world’s people.

We see this clearly in the story of Abraham and Hajar, which we find narrated in Sahih Al-Bukhari.

Abraham (peace be upon him) set off with his wife Hajar and newborn son on a long journey. They arrived at Makkah. Hajar looked around her. She could see nothing but a barren wasteland in all directions. There was no life. The silence was unbearable.

In the distance, the land met the sky without any movement breaking the terrain anywhere. This alien landscape grew even stranger in Hajar’s eyes as she recalled that her husband Abraham was intending to leave her here, without a doubt, and return to his people.

Hajar’s mind was beset with all kinds of thoughts: What was she getting herself into?

How can she survive among these sharp crags?

How will she bear the impenetrable darkness of the night?

This was certain death. What husband would leave his wife and child to die in the desert?

The Power of Trusting in God

When she turned to her husband, her conduct was impeccable. Her manners were perfect and her countenance was calm. Nevertheless, whenever it seemed to her like he was about to leave, her heart would make an involuntary jump.

The time came when Abraham resolved to depart. Hajar was not going to disobey her husband, for he was a Prophet of God and this was something about which she had no doubt. He did not take but a few steps before Hajar rushed over to him, the full force of her being left alone in this wilderness bearing upon her.

“O Abraham! Where are you going, leaving us in this barren, empty valley?”

Abraham did not turn around to face her, though she asked again and again. Finally, she asked:

“Did Allah command you to do this?”

Abraham said: “Yes, He did.” Then her heart calmed down.

She said: “Then, Allah will certainly not ever neglect us.”

Her words were so certain, so sure, that it added reassurance to even Abraham’s heart in his carrying out what he knew for certain God had commanded him to do.

In this, we see how a woman is able to shoulder great hardships that a man would be unable to bear, as long as she is a firm believer in the task that she is undertaking. When a woman believes in a cause that is noble, she is able to sacrifice her safety, her stability, and even her entire life aspiring for what she recognizes to be a greater and mighty purpose.

This is how our mother Hajar was able to remain in that desolate wasteland until the water that was with her ran out without losing heart and without succumbing to despair. Nor did she sit down and await her fate.

Though Hajar put her trust fully in God, she was not complacent. She was actively in the search for water for herself and her baby, and she did not let herself weary under the relentless heat of the sun. She scanned the valley that she was in.

Nothing stirred. So she headed for the nearby mountains. Perhaps from its summit she would spot some signs of life. She climbed to the top of Mount Safa and looked in every direction.

Sometimes she walked at a hurried gait. When fatigue beset her, she would slow down for a while. She kept going, spurred on by the idea that behind Mount Marwa she might spot some sign of life. She ascended the peak.

She kept up the search, ultimately going between the two hillocks seven times, hoping she would spot some travelers or some caravan passing by. She continued to pray to God and beseech His help.

After her latest descent into the valley from the top of Mount Safa, she looked to where she had gently placed put her child, Ishmael, on the ground. Water was springing forth from beneath his feet.

This was the help of God. God’s help did not come with a dramatic thunderclap. There was no lightning; there were no storm clouds, no heavy rains, and no floodwaters. Instead there was a spring quietly bubbling up from under from the earth – the very thing which could promise a permanent source of life-giving water.

God had answered Abraham’s prayers and had proven Hajar’s words to be true – never did God neglect her.

With the life that Hajar established in Makkah with her son Ishmael, a nation was born that would last until the end of time.

The story of this nation begins with a woman who was willing to bear great burdens to establish it. To honor her, the efforts that she made are repeated in the rites of hajj every year. The Prophet Muhammad (peace be upon him) said:

“This is why the people walk back and forth between Safa and Marwa.” (Al-Bukhari)