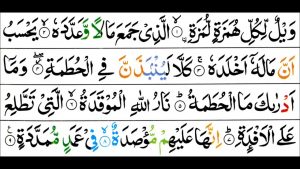 Surah Al-Humazah was revealed in Makkah. It was the 32nd Surah revealed to Prophet Muhammad following the revelation of Surah Al-Qiyamah.

The Prophet’s Companions called it the “Surah of the Crushing One”.

The overall theme of Surah Al-Humazah

The overall theme of the Surah exposes a mean type of person. One who appears in every society. One who obtains his wealth by the grace of Allah but uses it wrongfully.

Instead of using it to spend in the cause of Allah and to help those in need, he tyrannizes others and blocks them from the way of truth.

Counting his wealth is such a source of pleasure to him, he does it often. Wealth gives him a false feeling of power; he can do whatever he wants without being held accountable.

Not only does he think that nothing surpasses wealth in terms of value and importance but also it makes him challenge death! He thinks he is immortal!

All this turns him into a mean person. One who backbites and slanders others without scruples or conscience.

Nevertheless, the Surah does not stop there. It emphasizes the fact that he will be brought on the Day of Judgment to receive his recompense, which is a severe one indeed!

The one who reviles and disgraces others with both the hand and the eye.

One who slanders, reviles and disgraces others with the tongue.

One of the descriptive names of the Hellfire as it crushes whoever resides therein.

Pillars of iron; or columns made of fire.

Islam forbids mockery and ridicule of others and never allows anyone to be a bad-apple picker!

If one is involved in slandering and making fun of others, he is entitled to receive a severe punishment on the Day of Judgment.

This implies the fact that Allah the Almighty defends and protects His servants against their slanderers. He is the Al-Muntaqim (the Restorer of Justice) Who restores the rights of those whom were shown or done injustice in this present life from their disdainers.

The Surah portrays the punishment of such a slanderer or disdainer on the Day of Judgment. It explains that he will be thrown into the Hellfire, which will crush his bones which will lock him in. All the while being tied to a column of fire just as an animal is tied, without respect.

Why should he be respected while he had shown no respect for the faithful servants of Allah in the present life? You reap what you sow!

Surah Al-Humazah identifies the abode the slander will face on the Day of Judgment as ‘Allah’s own kindled fire,’ and that it is the fire of Allah which “suggests that it is an exceptional, unfamiliar sort of fire, full of terror” (Qutb, In the Shade of the Qur’an).

Allah’s saying, “which will rise over people’s hearts,” is interpreted to mean that the kindled fire will devour every part of the slander’s body until it reaches his heart and come up to the level of his throat. It will then return to his body so on and so forth. What a tremendous punishment and severe recompense it is!

There is a close relationship between one’s firm belief and his behavior. Indeed, one’s belief has the utmost influence upon one’s behavior.

You may find someone who is heedless of and inattentive to the Signs of Allah, rigid, and immoral, but as soon as faith touches his heart and dwells therein, he becomes lenient, forgiving, generous, merciful, pious, and so tender that he may shed tears whenever he recalls any of his past misdeeds!

“A funeral procession passed by Allah’s Messenger (peace and blessings be upon him) who said, ‘Relieved or relieving?’

The people asked, ‘O Allah’s Messenger! What is relieved and relieving?’

He said, ‘A believer is relieved (by death) from the troubles and hardships of the world and leaves for the Mercy of Allah, while (the death of) a wicked person relieves the people, the land, the trees, (and) the animals from him.’” (Al-Bukhari and Muslim)

The people, the land, the trees, and the animals are all relieved from him by his own death! None is pleased with his disbelief and bad conduct which hurts everyone and everything.

Therefore, if the relationship between faith and behavior is that close, our iman should be proven by good deeds and noble character. Being a true believer is not all about accumulating knowledge of `aqeedah (creed) and committing it to one’s heart without benefiting from such knowledge. That is what we learn from Surah Al-Humazah.

Dr. Ali Al-Halawani is Assistant Professor of Linguistics and Translation Studies. He is an author, translator, and writer based in Canada. To date, Al-Halawani authored over 400 original articles on Islam and Muslims, most of which can be accessed on www.truth-seeker.info and other famous websites. He has recently started to self-publish his articles and new books, which are available on Amazon and Kindle. You can reach him at [email protected].