Why Did Prophet Muhammed Migrate to Madinah? 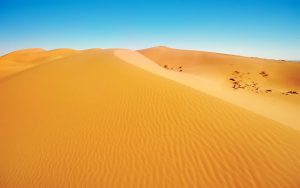 Why Did Prophet Muhammed Migrate to Madinah?

One may wonder, “Why would the Prophet (peace and blessings be upon him) and Muslims leave their hometown, Makkah, to a very distant place like this (Madinah)?”

The straightforward answer is because he and the Muslims were not able to worship Allah in Makkah and they had been tortured by the Makkans.

While that was absolutely true, this may have been the cause of migrating to Abyssinia as a few of the companions did a few years back.

Prophet Muhammed (peace be upon him) and the rest of the believers could have joined their fellow Muslims there. They would have the opportunity to worship in peace over there.

In fact, right before the death of his uncle, Abu Talib, the leaders of Makkah offered the Prophet (PBUH) to let him worship the way he wanted on the condition that he would not get involved in the public life: no more calling to Allah, no more values Islam promotes, no more involvement in their “business.”

The Prophet (PBUH) could have accepted this offer and saved himself and his companions the trouble of migration.

A Mission beyond individual rituals

Rather, he was looking for a place where he could fulfill his mission of conveying his message to the whole world. He was entrusted with this message and he was required to convey it to the world.

The mercy that Islam came with is not exclusive to the Prophet or the few people around him. The world had the right to know this message, to experience its mercy, and have the ability and the freedom to embrace it.

The Prophet wanted to do so in a world full of tyrants, kings, and regimes that oppressed people and would not make his job easy.

What took place in Makkah was just an example of what he would face afterwards. With a place as hostile as Makkah, it was almost impossible to fulfill his responsibility.

The Prophet tried and hoped for Makkah to be this home, this support, and the nucleus that would spread the light of Islam to the world. You can see this in his words to the leaders of Makkah.

When the Prophet found out that Makkah was no longer this place, he started looking outside. He traveled to At-Taif, another big city not far from Makkah, and came home with no success.

He talked to many tribes and individuals during the season of Hajj with no one accepting his message.

It was very clear in his message to these tribes and groups that he was not simply asking them to believe in him. He was explicitly demanding their support to his message and to his cause.

Kings will hate you!

They were a strong tribe, large in number, and known of high quality character, a perfect fit for what the Prophet was looking for.

They even liked the message of Islam and they all agreed that it was worth believing in it. However, at the end of the conversation, one of their leaders said,

They were referring to the great Persian Empire not far from the north of where they lived. More interesting than the offer was the response of the Prophet to the offer.

He politely refused the offer clearly pointing out that he was looking for someone to shoulder this responsibility all the time in the face of all difficulties, a very clear sign that the Prophet was not looking for a place to live and perform some rituals.

The Hijrah marked the move where Islam had the hosting city. It marked the event where the Prophet finally had the support he was looking for.

The Hijrah marked the event where Muslims started spreading their message away from the torture of Makkah.

We should understand our role as bearers of the message of Islam in our land. Our people have the right to know this message, pure and clear.

The message of Islam is a message of mercy to mankind until the Day of Judgment.

As it was the responsibility of the Prophet and his Companions to carry out this message until it has reached us, it is our responsibility to take it to our people and to generations to come.

Why would others migrate?

Another question that comes to one’s mind when the issue of migration is mentioned:

Why could not the Prophet leave alone?

He could have gone to find support in Madinah and let the Makkan Muslims stay in Makkah among their tribes. So, why the trouble?

It requires the effort of everyone: men and women, Makkan Muslims and others.

That is why it was required that every Muslim should migrate to Madinah unless the Prophet explicitly asked him not to.

That is why we see whole tribes coming to join Madinah.

We take the migration process lightly. Imagine; you lead a normal life, you have kids and a family, you have businesses and wealth. Imagine that you have to leave all this and migrate.

They left to a place where they knew no one and had no place to stay in. They left to a different climate where most of them got sick.

The most interesting part is that they did all that very quickly and very willingly.

Two interesting stories show themselves regarding this point: The first was the story of the family of Abu Salamah and his wife, Um Salamah. Without getting into the details of the sad story, migration for Abu Salamah meant leaving his beloved wife.

It meant also leaving his very young child. For Um Salamah, it meant losing her husband and her son. It meant traveling alone to Madinah after two years for about 500 kilometers

He made a deal with them to tell them about the place where he had hidden his wealth in recompense for letting him leave. They agreed and he traveled.

Are we ready to migrate?

Are we ready to sacrifice for Islam the same way these people did?

How much of life comfort are we willing to give up in support of our message?

Are we ready to spend money, expend effort, and lose loved ones for the sake of Allah?

Are we willing to put our lives as servants of this religion and workers for this cause?

These are the questions we need to ask if we want to leave behind a remarkable event such as the Hijrah.

Adapted with slight modifications from Lectures and Thoughts by the author.