Glimpses on the Night Journey 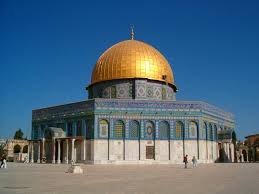 Jerusalem thus appears at the heart of the Prophet’s experience and teaching as a dual symbol, of both centrality (with the direction of prayer) and universality (with the prayer of all the prophets).

The Prophet liked to go to the Ka`bah enclosure at night. He would stand there in prayer for long hours.

One evening, he suddenly felt deeply tired and in great need of sleep. He therefore lay down near the Ka`bah and fell asleep.

Prophet Muhammad (peace be upon him) has related that the Angel Gabriel then came to him. Gabriel shook him twice to awaken him, but Muhammad slept on; the third time the angel shook him, Muhammad awoke, and Gabriel took him to the doors of the mosque, where a white animal (looking something like a cross between a mule and a donkey, but with wings) was waiting for them. He mounted the animal, which was called al-Buraq, and started with Gabriel heading toward Jerusalem.

There, Prophet Muhammad met a group of prophets who had preceded him (Abraham, Moses, and others), and he led a group prayer with them on the Temple site. When the prayer was over, the Prophet was raised with the Angel Gabriel beyond space and time.

On his way, rising through the seven heavens, he again met the various prophets, and his vision of the heavens and of the beauty of those horizons permeated his being. He at last reached the Lotus of the Utmost Boundary (Sidrat al-Muntaha). This was where the Prophet received the injunction of the five daily prayers and Revelation of the verse that established the elements of the Muslim creed (al-`aqidah):

“The Messenger believes in what has been revealed to him from his Lord, as do the believers. Each one believes in God, His angels, His books, and His Messengers. We make no distinction between one and another of His Messengers. And they say: ‘We hear, and we obey: [we seek] Your forgiveness, our Lord, and to You is the end of all journeys.” (Al-Baqarah 2: 285)

Prophet Muhammad was taken back to Jerusalem by the Angel Gabriel and al-Buraq, and from there to Makkah. On the way back, he came upon some caravans that were also traveling to Makkah. It was still night when they reached the Ka`bah enclosure. The angel and al-Buraq left, and Muhammad proceeded to the home of Um Hani, one of his most trusted Companions. He gave her an account of what had happened to him, and she advised him not to tell anybody about it, which Muhammad refused to do.

Later on, the Qur’an was to report this experience in two different passages. One is in the chapter titled, “Al-Isra” (The Nocturnal Voyage), directly refers to the event:

“Glory to He Who took His servant for a journey by night from the most sacred mosque to the farthest mosque, whose precincts We blessed, in order that We might show him some of Our signs: for He is the One Who hears and sees [all things].” (Al-Isra’ 17: 1)

“It is no less than inspiration sent down to him: he was taught by one mighty in power, endowed with wisdom. For he appeared in angelic form while he was in the highest part of the horizon. Then he approached and came closer, and was at a distance of but two bow lengths or nearer. So did God convey by inspiration to His Servant what He meant to convey. The heart in no way belied that which he saw. Will you then dispute with him concerning what he saw? For indeed he saw him at another descent, near the Lotus of the utmost boundary near it is the Garden of Abode-when that which covered the Lotus covered it. His sight never swerved, nor did it go wrong. For truly did he see, of the signs of his Lord, the Greatest!” (An-Najm 53: 4-18)

The Night Journey and ascension were to give rise to many comments, both when the Prophet recounted the facts and later among Muslim scholars. When Muhammad went to the Ka`bah and reported his experience, jeers, sniggers and criticisms quickly followed. The Quraysh believed that at last they had proof that this so-called prophet was indeed mad, since he dared claim that in one night he had made a journey to Jerusalem (which in itself required several weeks) and that he had, furthermore, been raised to the presence of his one God. His madness was obvious.

A Test of Faith

The Night Journey experience, presented in classical accounts of the Prophet’s life as a gift from God and a consecration for the Messenger, the Elect (al-Mustafa) was a real trial for Muhammad and those around him. It marked the boundary between those believers whose faith radiated in their trust in this Prophet and his message and the others, who were taken aback by the improbability of such a story. A Quraysh delegation hastened to go and question Abu Bakr about his mad and senseless friend, but his immediate, forthright answer surprised them: “If he says such a thing, it cannot but be true!” Abu Bakr’s faith and trust were such that he was not in the least disturbed, even for a second. After that, he personally went to question the Prophet, who confirmed the facts; as a result, Abu Bakr repeated forcefully: “I believe you, you have always spoken the truth.” From that day on, the Prophet called Abu Bakr by the epithet As-Siddiq (he who is truthful, who confirms the truth).

The trial that Muhammad’s Night Journey presented for his fellow Muslims occurred at a moment when they were struggling with a most difficult situation. Tradition reports that a few Muslims left Islam, but most trusted Muhammad. A few weeks later, facts confirmed some elements of his account, for instance the arrival of caravans whose coming he had announced (having seen them on his way back) and of which he had given a precise description. Thanks to the strength of this faith, the community of Muslims would be able to face future adversity. From then on, Umar ibn al-Khattab and Abu Bakr were always to stand in the front line of this spiritual force.

Muslim scholars have, from the outset, pondered the question of whether the Night Journey was of a purely spiritual nature or whether it was also physical. The majority of scholars consider that the journey was both physical and spiritual. All things considered, however, this question is not essential in the light of the teachings that can be drawn from this extraordinary experience undergone by the Messenger. There is first of all, of course, the centrality of the city of Jerusalem: at the time, the Prophet prayed facing the holy city (the first qiblah, or direction of prayer), and during the Night Journey it was on the site of the Temple that he led the prayer together with all the prophets.

Jerusalem thus appears at the heart of the Prophet’s experience and teaching as a dual symbol, of both centrality (with the direction of prayer) and universality (with the prayer of all the prophets). Later, in Madinah, the qiblah (direction of prayer) was to change -from Jerusalem to the Ka`bah- to distinguish Islam from Judaism, but this by no means entailed a diminution of Jerusalem’s status, and in the above mentioned verse the references to the “most sacred mosque” (the Ka`bah, in Makkah) and the “farthest mosque” (al-Aqsa, in Jerusalem) establish a spiritual and sacred link between the two cities.

The other teaching is of a purely spiritual essence: all Revelation reached the Prophet in the course of his earthly experience, with the exception, as we have seen, of the verses that establish the fundamental pillars of faith and the duty of prayer. The Prophet was raised to heaven to receive the teachings that were to become the foundation of Islamic worship and ritual which require that believers should accept their form as well as their substance. Unlike the field of social affairs, which calls for the creative mediation of people’s intellect and intelligence, human rationality here submits, in the name of faith and as an act of humility, to the order imposed by Revelation: God has prescribed requirements and norms that the mind must hear and implement and the heart must love. Raised to receive the injunction of ritual prayer, the Prophet and his experience reveal what prayer must in essence be: a reminder of and an elevation toward the Most High, five times a day, in order to detach from oneself, from the world, and from illusions.

The Mi`raj (the elevation during the Night Journey) is thus more than simply an archetype of the spiritual experience; it is pregnant with the deep significance of prayer, which, through the Eternal Word, enables us to liberate our consciousness from the contingencies of space and time, and fully comprehend the meaning of life.

This excerpt was taken from the book “In The Footsteps of The Prophet – Lessons from the Life of Muhammad” by Tariq Ramadan with slight editorial modifications.

Professor Tariq Ramadan holds MA in Philosophy and French literature and PhD in Arabic and Islamic Studies from the University of Geneva. In Cairo, Egypt he received one-on-one intensive training in classic Islamic scholarship from Al-Azhar University scholars.

Tariq Ramadan is Professor of Contemporary Islamic Studies at Oxford University (Oriental Institute, St Antony’s College). He is also teaching at the Faculty of Theology at Oxford. He is at the same time a Visiting Professor in Qatar (Faculty of Islamic Studies) and in Morocco (Mundiapolis) and a Senior Research Fellow at Doshisha University (Kyoto, Japan).

Through his writings and lectures he has contributed substantially to the debate on contemporary Islamic issues, Islamic revival in the world and Muslims in the West. He is active both at the academic and grassroots levels lecturing extensively throughout the world on theology, Islamic law and jurisprudence, applied ethics, philosophy, social justice, economy, politics, interfaith and intracommunity dialogue. Professor Tariq Ramadan is currently President of the European think tank: European Muslim Network (EMN) in Brussels.