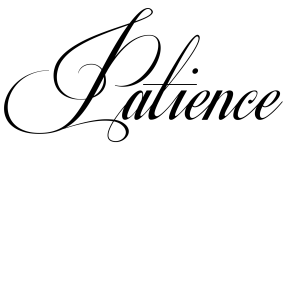 Faith is a strong incentive that helps achieving patience.

As Almighty Allah has enjoined patience, He has also provided some means that lead to it and support it. Whenever Allah ordains something, He grants the necessary help and appoints the way to maintain it. Indeed, Almighty Allah never inflicts a disease unless He provides its remedy, through which recovery is ensured if He wills. Though difficult for the soul, patience is possible to attain and worthy to strive for.

Patience has two aspects: theory and practice. In these, cures of the heart and the body are found. The theoretical aspect, as well as the practical one, should be present so that the most effective treatment may be facilitated.

The theoretical aspect requires us to get acquainted with the goodness, benefits, bliss, and perfection of the divine obligations as well as the evil and harm of what is forbidden.

When a person adds to this his or her sincere resolution, powerful will, and sense of honor, patience is the result. When this occurs, hardships become of little importance, bitterness turns into pleasure, and agonies transform into joys.

There is a continual struggle between patience and impatience. Both seek victory over the other, but the victory of either side will be ensured only when a person supports one side against the other. When one’s lusts and whims become stronger and gain supremacy, to the point that relief is unattainable, one is usually tempted by promises of gratification and dissuaded from the divine remembrance and contemplation of what is beneficial to one both in this world and in the hereafter.

However, if a person is resolved to resist and seek treatment for such a spiritual infection, he or she can achieve that by observing the following:

First, the negative side of desires is nourished by that which stimulates and stirs it into action. So, to weaken the effect of this process, one should avoid the possible stimulus, such as excessiveness in food, for example. Fasting helps control one’s desires, especially if the fast is broken with a modest meal.

Second, desire is often stimulated by eyes gazing and, thus, a person should lower his or her gaze as much as possible. The motivation of one’s will and desire, with which the heart may be moved, is stirred by gazing. Indeed, such gaze is a poisoned arrow of Satan. Satan sends its arrows against an unarmored heart. Armor here connotes either lowering one’s eyes or diverting them. Such an arrow is thrown from the bow of physical forms. If one keeps away from it, it misses its target; otherwise the heart would be smitten.

Third, pleasure should be sought in what is permissible. Man’s natural instincts can be satisfied with what Almighty Allah has permitted. As pointed out by Prophet Muhammad (peace and blessings be upon him) this is an effective treatment that is prescribed for most people.

Fifth, one has to think about the ugly aspects of the evil inclinations and whims of the soul. The human being who has even the slightest sense of honor naturally dislikes to be involved in any evil affair.

Faith is a strong incentive that helps achieving patience. Faith can be strengthened by the following:

According to some Companions of the Prophet, faith is taken away from such a person like an umbrella is taken from over one’s head. When he or she repents, faith is obtained once more.

***“O you who believe! Seek assistance through patience and Prayer; surely Allah is with the patient.” (Al-Baqarah 2:153)

Allah’s aid and bounty are surely better and more lasting. Eternal success and happiness are so much more desirable than a short joy in the brief period of one’s life.