The Lost Art of Altruism 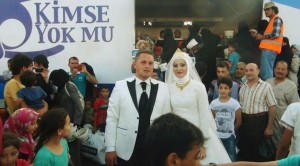 It was the father of the groom’s idea, but the couple ran with it.

“He is not a believer whose stomach is filled while the neighbor to his side goes hungry.” (The Prophet Muhammad)

Fethullah Üzümcüoğlu and his bride Esra Polat behaved as true believers when they took their savings for their wedding and put it towards feeding their neighbors in Turkey’s Kilis Province earlier this month.

And who were their neighbors?

They just so happened to be thousands of Syrian refugees.

“I thought that sharing a big delicious dinner with our family and friends was unnecessary, knowing that there are so many people in need living next door. Therefore, I came up with this idea and shared it with my son.

I’m very happy that he accepted it and they started their new happy journey with such a selfless action,” the groom’s father, Ali Üzümcüoğlu told Serhat Kilis newspaper.

It was the father of the groom’s idea, but the couple ran with it. In a day and age when weddings are seen as an opportunity to show off, this young couple decided to do something better with their celebration.

They decided to treat their brothers and sisters who are suffering by inviting them to join in their celebration.

Abu Hurairah, a companion of the Prophet Muhammad used to say:

“The worst kind of food is the wedding feast to which the rich are invited and the poor are ignored.”

However, despite this, more often than not, only the rich and those with power are invited to events of this kind. Most use these opportunities to show off. Moreover, it has become a sickness of our society to ignore the poor. At most those who are more fortunate send a few coins to the less fortunate as a way to satisfy their conscious.

Those of us who have so much often act like poverty and hardship is a communicable disease, staying as far from those who suffer from it as possible. However, the Prophet (peace be upon him) taught us that:

“A Muslim shall never leave another Muslim helpless in the time of need.”

This hadith (Prophetic tradition) does not say we should give to the Muslim in need, even though there are many hadiths that do say this. It says we should not leave them. Often our charity feels too much like an excuse to leave the Muslim who is in need. Sometimes it takes more than money.

Treating the Down Trodden as Your Brothers and Sisters

By inviting the refugees to participate in a meal celebrating their wedding, the couple did more than fill the stomachs of the hungry neighbors. They treated them as their brothers, and honored them as guests. Lifting up those in hardship takes more than just giving to them in charity. It takes treating them with kindness and dignity.

This beautiful young Turkish couple has reminded us all of what charity should look like with their beautiful and loving act. The couple didn’t just send their wedding money to the refugees, which would have been an amazing act in and of itself.

After they were married, the couple put a beautiful smile on their faces, greeted their brothers and sisters, shared their day with them, and rolled up their sleeves in their best clothes and served the refugees. The couple not only gave to them, they treated them well.

Good treatment of those who receive our charity is essential.

“O you who have believed, do not invalidate your charities with reminders or injury as does one who spends his wealth [only] to be seen by the people and does not believe in Allah and the Last Day.” (Al-Baqarah 2:264)

The groom, Fethullah, told i100.co.uk that “Seeing the happiness in the eyes of the Syrian refugee children is just priceless. We started our journey to happiness with making others happy and that’s a great feeling.”

The joy they felt on their wedding day was multiplied because it became a day of joy for more than just them. It became a day for their neighbors who have seen the worst of humanity to celebrate now that they were seeing how great their fellow humans could be.

May Allah bless this couple in their marriage and make us all more like them.

It is my hope that this story will not just go viral on the internet, but that it will go viral in reality.

It is my hope that more than the story will be shared, that the idea will be shared, and that we can revive the lost art of altruism, not just for our fellow Muslims but also for all of humankind.

And that is a virus worth spreading.

Theresa Corbin is a New Orleans native and Muslimah who converted in 2001 after many years of soul searching and religious study. She is a freelance writer, editor and graphic artist who focuses on themes of conversion, integration, societal stereotyping and bridging gaps between cultures and religions.

Visit her blog, islamwich, where she and fellow contributors discuss the intersection of culture and religion.