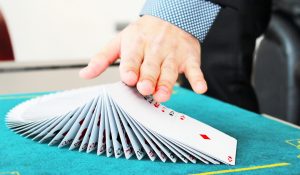 Magic is a reality and not mere illusion; some people consider tricks of the hand or deceptions of the eye to be magic, but magic is much more than that; it is a reality, and could lead one to hate what he used to love, such as the case which Allah informs us of in the abovementioned verse where it can separate man from his wife.

Indeed the goal that the devil strives hardest to achieve is to separate man from his wife, as in the narration of Jabir ibn ‘Abdullah, may Allah be pleased with him, who stated that the Prophet (may Allah exalt his mention) said:

“Satan places his throne on the water, then he sends his troops to people; the closest devil in position to him is the one who causes the most mischief and trials amongst people. One of them (i.e., from his troops) comes to him and says: ‘I continued to whisper to so and so until he committed such and such a sin.’ Satan responds: ‘I swear by Allah! You have not done much.’ (This process continues) until one (devil) comes and says: ‘I continued to whisper to him until I made him separate from his wife.’ Thereupon, Satan brings him close to him and hugs him, saying: ‘Yes! You are the one.’” [Muslim] Meaning, that he is the one who has achieved the greatest accomplishment. This separation is caused by either magic or by any other means.

Some magicians use magic to bewitch the eyes of people and make them believe that they are seeing something that they are not, as Allah says regarding the magicians of Pharaoh what means: “…And they presented a great [feat] of magic.” [Al-A`raf 7: 116] People thought, as a result of their magic, that they were seeing snakes instead of ropes and sticks.

Some people claim that there is a prophetic narration that is as follows: “Learn magic but do not teach it to others.” This is a fabrication; such words were never uttered by the Prophet (may Allah exalt his mention).

The Islamic ruling regarding the magician is that he is to be beheaded, as the Prophet (may Allah exalt his mention) said: “The punishment for the magician is that he must be beheaded.” [At-Tirmithi & Al-Hakim] This is because such a person is an apostate, even if he fasts, prays and claims that he is a Muslim because his practice of magic invalidates any good deeds he may perform.

There are two ways of being relieved from the effects of magic:

– The incorrect way is to go to magicians for this purpose; this is prohibited because the Prophet (may Allah exalt his mention) said: “He who approaches a magician and believes what he says will have his prayers rejected for forty days.” [Muslim] Thus, it is prohibited to approach them or to seek their assistance in removing the effect of magic done on one by others.

– The correct way is by reciting the legislated Ruqyah (i.e. the Quran and certain prophetic supplications). Examples of this would be the Chapters Al-Fatihah, Al-Ikhlas, Al-Falaq, An-Nas and the Verse of the Throne, or Ayat Al-Kursi, which is the two-hundred and fifty-fifth verse of Chapter Al-Baqarah. An example of a prophetic supplication that is useful in this regard is: “Allahumma Rabban-nas, athhibil-ba’s, wash’fi, Antash-Shafi, la shifa’a illa shifa’uka, shifa’n la yughadiru saqama [O Allah! The Lord of mankind! Remove this disease and cure (him or her). You are the Great Curer. There is no cure but through You, which leaves behind no disease].” [Al-Bukhari]

One may also recite Quranic verses in water and add to it seven dried and crushed Lote-tree leaves. This method is confirmed to have been practiced by some of the Salaf such as Wahb ibn Munabbih may Allah have mercy upon him.

Some people recite the verses that address the issue of magic, like those found in Chapters Al-A’raf, Yoonus, and Taha over this water and then add the crushed leaves to it, then they recite Chapters Al-Ikhlas, Al-Falaq, An-Nas and some authentic Prophetic supplications over it. They then wash their body with this water. This is a method that has been proven to be beneficial by experience.

The Prophet (may Allah exalt his mention) was bewitched by Labeed ibn Al-A’sam, who had strong relations with the Jews, and the Jews requested his assistance due to him being renowned for his experience in magic.

So the Prophet (may Allah exalt his mention) headed out towards the well. He later returned and said to me: “The date-palms (i.e., the ones on the well) are like the heads of devils.” I asked: ‘Did you take out those things with which the magic was done?’ He (may Allah exalt his mention) replied: “No, for I have been cured by Allah, and I am afraid that this action may spread evil amongst the people.” Later on, the well was filled up with earth.” [Al-Bukhari]

The hair that was on the comb was taken, and a knot was made in which the magic was placed; then, the hair that contained the magic was placed inside the outer skin of the pollen of a male date-palm, and this was placed under a rock, inside the well. When some Companions (may Allah be pleased with them) went to remove this magic from the well, they found that its water was the colour of Henna, due to the effect of magic on it.

The Prophet (may Allah exalt his mention) was inspired by Allah as to where the location of the magic was; it was removed and the knot was undone, so the magic was ruined.

He (may Allah exalt his mention) was very careful not to execute anyone whose crime was not obvious to everybody, and it is for this same reason he refrained from killing Ibn Salool, who was the head of hypocrites, despite him knowing that he was being a disbeliever, a liar and a hypocrite.

He (may Allah exalt his mention) did not kill him because it would not have been clear to people why he killed him, due to this Ibn Salool pretending to be Muslim.

One may ask: “How could the Prophet (may Allah exalt his mention) be bewitched when he was conveying the message?”

The answer is that the magic never affected any aspect of his mind, memory or mission; it only affected his relations with his wives.

Another question that might be asked is: “Does the fact that he (may Allah exalt his mention) was bewitched not contradict being protected by Allah? Allah says what means: “…And Allah will protect you from the people…” [Al-Ma’idah 5: 67]

In fact, proof of the fact that such protection was limited is that he (may Allah exalt his mention) was afflicted greatly by the disbelievers: they offended and beat him, and besieged him and his followers. He (may Allah exalt his mention) also suffered hunger and fell into a pit that the disbelievers had dug for him. They did all these things but were unable to prevent him from conveying the message of Allah.

Some magic is performed by blowing into knots and other materials which magicians compile, which makes the bewitched person believe he is performing actions that is not actually doing; another type makes a person incapable of having sexual intercourse with his wife; another type makes the wife imagine that her husband is a beast or a snake whenever he tries to approach her sexually; there is another type that makes the husband imagine that his wife has a foul stench whenever he attempts to approach her sexually, even though she may be clean and smell pleasant.

There are women who resort to magic in order to make their husbands divorce his other wife or wives so that she can have him all to herself – and this is one of the greatest ways of oppressing others.

One may ask: “There are deadly types of magic; are they incurable?”

The answer is that they are curable unless the effects of this magic coincide with the designated time of the person’s death. If that is the case, then nothing can help him. Allah says what means: “But never will Allah delay a soul when its time has come. And Allah is Acquainted with what you do.” [Al-Munafiqun 63: 11]

The one who bewitches others and thereby causes their death must be sentenced to death because such a person killed a soul intentionally and without due right.

Some people wear amulets, claiming that they protect them from magic, but they only add to the evil and make them weaker in faith.

In Islam, ends do not justify means; there are people who resort to magic in order to reconcile, for example, between two disputing people. This is prohibited, even if people claim that they have good intentions and are only using it for a good purpose. This is refused in Islam because the means used are evil, and regardless of the sought result, using magic remains prohibited.