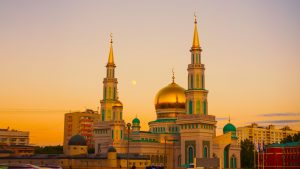 During Ramadan, some Muslims go into seclusion in the mosque and spend time in prayer and contemplation. The period may vary from the middle ten days to the last ten days (according to some hadith). The seclusion allows very little contact with people and their families. This is done in the belief that it would increase one’s spirituality and piety (Taqwa). I’tikaf, as the practice is called, is optional according to the Qur’anic verse 2:187. This verse is also used to justify seclusion by its proponents.

Therefore, I’tikaf would also mean to strive for unity among the believers and prevent their scattering. By extension, it would mean to address the issues and problems of a Muslim community so that they remain bound together and not be scattered, divided or fractionalized. While the ritualistic part remains, the essence and meaning of I’tikaf has drifted away.

It requires a great deal of pondering, thinking, and planning to solve life’s problems. The Prophet (PBUH) and his companions (R) faced problems and challenges constantly. They did not lead a monastic life by secluding themselves from the community and its problems but were constantly engaged with the world around them. Some of them did take to the mosque in the last ten days of Ramadan in the form of a retreat to discuss, contemplate, and to find effective ways to deal with the problems and challenges. This was their I’tikaf.

The enhanced community spirit and a sense of togetherness during the month-long period of fasting and introspection provide an excellent opportunity for Muslims to resolve their problems and differences. It is a common experience that after going through the first weeks of restraint and discipline most Muslims are in a heightened state of spiritual consciousness. This strength should be put to use in the service of the Muslim community and also the community at large. This should go hand in hand with prayers and dhikr of Allah. That would be the best way to practice I’tikaf.

Allama Iqbal summarized the whole subject in this brief verse:

If you are not prepared to deal with the problems of the Earth;