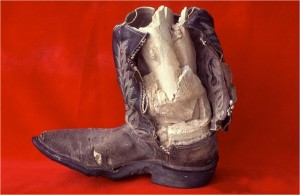 Iron is preserved undamaged in the body as it fossilized. Human beings need to consume an average of 10-15 milligrams a day in order to be healthy. Any excess iron consumed is stored in the liver.

“They say, ‘What! When we are bones and crumbled dust, will we then be raised up as a new creation!’ Say: ‘It would not matter if you were rock or iron or indeed any created thing that you think is harder still!’ They will say, ‘Who will bring us back again?’ Say: ‘He Who brought you into being in the first place’…” (Al-Isra’ 49-51)

The above verses are a reference to people’s dead bodies petrifying and turning into iron. Living tissue is not preserved over millions of years. That is why it is only possible to see things that lived a long time in the past once they have been fossilized. After they die, living things can be preserved for years by fossilization, by their bodies turning into stone under the ground. The word “fossil” refers to “the preservation of a living thing by petrification,” by its turning into stone.

Iron is preserved undamaged in the body as it fossilized. Human beings need to consume an average of 10-15 milligrams a day in order to be healthy. Any excess iron consumed is stored in the liver. In addition, the protein transferring in blood plasma also carries a certain amount of iron.1 The reference in the above verse to the presence of iron in the remains of the human body is exceedingly wise from that point of view.

Research has also shown the presence of “pyrite,” (FeS2) a compound of iron and sulfur, in fossils.2 The iron mineral pyrite forms very easily during the degradation of organic substances. It is therefore generally found in fossil shells and is capable of damaging the fossils since it can react with oxygen and water. The words “crumbled dust” in the verse may be a reference to “pyrite degradation,” which leads to the fragmentation and collapse of a fossil as pyrite reacts with water and oxygen.3 Allah knows the truth.

Another fact confirmed by recent findings is that matter constantly seeks the most stable state. Therefore, given sufficient time, all matter will eventually turn into iron. Iron is the most stable state of nuclear matter, and cosmological models predict a stage in which everything will turn into iron as a result of nuclear fusion and nuclear fission reactions.4 In his book In Search of Schrodinger’s Cat: Quantum Physics And Reality, the astrophysicist John Gribbon describes how iron is the most desirable state of matter and how all matter in the universe wants to turn into iron.5

The revelation in the Qur’an that human beings petrify and fossilize and turn into iron is a fact that has now been scientifically confirmed. In the same way that no archaeological, paleontological, geological or astronomical research was possible at the time the Qur’an was revealed, neither was it possible to identify the elements using an electron microscope. For that point of view, the facts revealed in the above verse once more confirm that the Qur’an is a divine text.