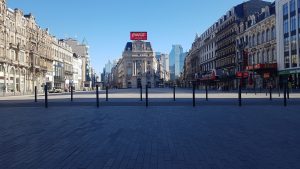 As of early afternoon time EST (USA), April 10, more than 1.6 million people are confirmed to have been infected by the Coronavirus (COVID-19) worldwide. More than 100 thousand people have reportedly died of this virus.

The USA tops the list with more than 502 thousand confirmed cases and eighteen thousand deaths (accounting for more than 18% of the total death toll and more than 30% of the infected people in the world). Italy has the highest number of deaths at over 19 thousand followed by Spain approaching 16 thousand (all these figures are increasing by the minutes).

In recent weeks, most governments around the globe have declared the coronavirus pandemic a national emergency. Sadly though, many heads of the state lied and continue to do so about this once-in-a-generation crisis. Some of the heads of the state are still in denial of this deadly virus.

As of now, 6761 patients are confirmed to have the COVID in India; 206 people have died. While the first case of COVID-19 was reported on January 30 inside India, the Modi government paid little attention to it. On February 1, Modi was busy preparing for Trump’s visit to India: Namaste Trump. On Feb. 23, Delhi pogroms were triggered against Muslims by his fascist party members. On Feb. 24, the Namaste Trump event was held. On March 4, the first government meeting was held to discuss the Coronavirus issue. On March 9, for the first time, screening tests began at the airports in India.

While the World Health Organization (WHO) declared COVID-19 a ‘pandemic’ on March 11, the BJP MLA (members of the legislative assembly) were taken to resorts in a bus on March 11-12. The BJP government declared on March 13 that it is not a health emergency and in the following days it was busy in toppling the Madhya Pradesh (MP) government. On March 16, Modi convened a SAARC meeting to discuss the pandemic.

On March 19, he addressed Indian people for the first time and announced a 1-day Janata (public) curfew. On March 20-21 BJP formed government in MP after BJP legislators in that state celebrated the fall of the Kamal Nath government on Friday with sweets and bursting of firecrackers at the party headquarters in Bhopal. As the virus problem spread, Modi extended the Janata curfew on March 22 and banned all flights on March 25. The next day, March 26, India was put on a lockdown until April 14.

In the USA, President Trump, too, was busy campaigning and visiting India, and then haughtily stating that the infection was not a danger, the risk being very little to Americans and could well be managed, even touting the idea that the US doctors could help China combat the pandemic, if asked. On Feb. 7, he claimed that the coronavirus would weaken “when we get into April, in the warmer weather—that has a very negative effect on that, and that type of a virus.”

On Feb. 27, he falsely claimed that the outbreak would be temporary: “It’s going to disappear. One day it’s like a miracle—it will disappear.” When the country’s testing capabilities are severely limited, he claimed on March 6, “Anybody that needs a test, gets a test. We—they are there. They have the tests. And the tests are beautiful.”

Now, Trump knows better and sounds alarming. My statistical analysis of the data suggests that the number of infected persons has been doubling every three days. The Centers for Disease Control and Prevention estimates that, in a worst-case scenario, 200,000 to 1.7 million Americans could die from COVID-19, The New York Times reports. Other estimates place the number of possible deaths at 1.1 million to 1.2 million.

House Speaker Nancy Pelosi said that lives might have been saved had Trump not spent weeks denying the severity of the approaching pandemic and adopted more aggressive actions to prepare.

President Donald Trump finally leveled with America about the desperate reality of the coronavirus pandemic, warning of cruel weeks to come in one of the most chilling White House moments in modern history. Even with blanket nationwide adoption of stringent mitigation efforts, between 100,000 and 240,000 Americans could face death in the coming weeks in a cascading nationwide ordeal, according to modeling explained by senior members of the President’s emergency task force Tuesday.

In times of national crisis, the US presidents have delivered grave news to the nation. George W. Bush had to narrate the horror of the 9/11 attacks in 2001. Ronald Reagan movingly eulogized shuttle astronauts after a 1986 disaster. And John F. Kennedy kept his nerve to address the nation during a showdown with the Soviet Union over Cuba that threatened to erupt in nuclear war.

According to CNN, no president for many decades has had to level with his country over such a sudden impending loss of American life in a medical emergency as Trump is now being forced to do — after apparently coming to terms about the extent of the crisis himself.

Like his ally and US President Donald Trump, Brazil’s President Bolsonaro has repeatedly sought to minimize the pandemic, first dismissing it as “fantasy” and then just “a little flu.” “A Brazilian dives in the sewer and he doesn’t catch anything,” Bolsonaro told viewers of his weekly Facebook Live program last Thursday. This Sunday, he toured the capital Brasilia, defying social distancing recommendations, visiting markets, and shaking hands with supporters while encouraging them to continue working to keep the economy going.

In Bangladesh, the first three cases of Covid-19 were confirmed on March 8th. Within the next ten days five more patients were diagnosed with the virus with one of them (a 70-year old man) dying on March 18. On March 14, Awami League general secretary and road transport and bridges minister Obaidul Quader said that no situation had emerged to close down educational institutions of the country due to the COVID-19 outbreak.

The opposition parties have claimed that the government was too busy with the preparation for centennial celebration of Bangabandhu, Sheikh Mujib; only when the event had to be cancelled since the guest of honor, Modi, declined to visit Dhaka to tackle the in-house virus problem in India did the government shift its attention to combating the virus. It was a late initiative but a necessary one to limit its spread.

Almost all the international flights to and from Bangladeshi airports, except mostly a few chartered flights, were stopped. But those who flew into Bangladesh were either not checked for the virus or were able to buy in their no-virus stamp (negative) through bribe when checked!

Corruption remains endemic in Bangladesh and thus, it is no accident that government measures on Covid-19 led a section of corrupt government officers and agencies to make money through illicit means. Since mid-March 2020, according to Human Rights Watch, government authorities have apparently arrested at least a dozen people, including a doctor, opposition activists, and students, for their comments about coronavirus, most of them under the draconian Digital Security Act.

Meanwhile, a leaked inter agency United Nations memo on Bangladesh’s Country Preparedness and Response Plan for COVID-19 estimates that up to two million people could die from the disease in Bangladesh if immediate steps are not taken to contain the spread of the virus. So far, fortunately, there appears to be – if the Bangladesh government report can be trusted – only 51 virus patients and 5 deaths. The government has extended the house lockdown to April 11.

Now with all the economic activities coming to a hard stop, millions of people are without any job and access to the basic means of survival.

Alarm caused by the Covid-19 pandemic is creating security problems in many countries. In Mexico a gang of over 70 people looted a grocery store in the municipality of Tecamac on the night of March 23. Outnumbering employees and security personnel, the looters took food, alcohol, and even money. Some employees were reported to have made off with some of the products not taken by looters.

Inside the USA, while most families have been stocking up on grocery items, many Americans have also been stocking up guns and ammunitions. The fear is: if martial law or curfew is imposed and people don’t have the access to food, esp. with millions of lost jobs, they may break into others’ homes and stores to grab what is necessary. In the past, there had been cases in which people walked out of grocery stores without paying while the store security guards were either inadequate or afraid to stop the gun-carrying customers. So, such fears are not too far-fetched in this land of Second Amendment!

Dr. Crystal Reeck, a professor at Temple University in Philadelphia, says all this uncertainty with the coronavirus is causing a lot of anxiety and fear. “And I think one of the ways people cope with anxiety and fear is trying to control what they can and trying to seek to sort of protect themselves and try to maintain as much security as they can for themselves,” said Dr. Reeck.

It goes without saying that all the governments have been dumbfounded and caught flat-footed by this nasty unseen enemy, sobering their arrogance. They saw it coming last year but ignored it until it started killing large scale in China.

Expectedly, outside those working in the health care sector, one class of notable people appear to have been affected more than others — politicians – because of their social interactions. The infected notables include Prime Minister Boris Johnson of the UK, Iraj Harirchi – the head of the Iranian counter-coronavirus task force, Franck Riester – French Culture Minister,  Nadine Dorries, UK Health Minister, and Prince Charles, the heir to the British throne. Canadian Prime Minister Justin Trudeau isolated himself for two weeks after his wife, Sophie, tested positive on March 12, following her return from the UK.

Of late, most governments have imposed ‘social distancing’ as one of the measures to curtail the spread of the virus. They may also like to learn the lessons from Germany, which probably has the lowest percentage of death, 1.11 percent. According to experts, Germany’s case fatality rate is so low due to its widespread testing. Unburdened by a restrictive central regulatory body, since healthcare is administered at the state level in Germany, private companies moved quickly to mass-produce those tests, meaning they could be rolled out rapidly to the population.

The governments around the globe need to plan and must develop contingent plan in dealing with not only the virus pandemic issue but also its on time and after-effects. How are they going to ensure that people do not die or lose hope? What happens if the policy makers themselves are infected?

Only the statistics of the coming days will show how effective various governments have been to combat this terrible pandemic!

May God help us all!

Adapted with editorial adjustments from islamicity.