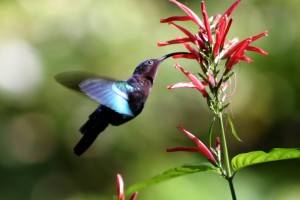 The evolutionists, who claim that life arose due to circumstance and mutation, cannot answer these questions.

The hummingbirds’ heart beats approximately 1,000 times per minute normally, while during heavy activity, it beats 1,200 times per minute. Because of their extremely high metabolisms, these birds consume an extraordinary amount of energy, they were created with special feeding methods by which they supply themselves with this energy.

The hummingbirds’ primary nutrition source is the nectar of flowers. While feeding, they stand in place, quite differently from other birds. Clapping their airfoils at least sixty times per second in a figure-eight configuration, they hover in the air and they take in nectar from the flower without moving their bodies.

Professor Andrew Hurley, who conducts studies as a life sciences behavioral ecologist at Canada’s Letbridge University and has done extensive research on hummingbirds discovered a very important property necessary for this beings’ survival. His study was published in the magazine” Journal of Current Biology”.

“’A hummingbird can compensate for the energy which it consumes very fast in the same way. Its alimentation time… in close relationship has great importance in this success. While feeding, it is very important not to lose time and energy by tending to flowers without nectar.’”

These beings, which are bound to take nourishment in order to obviate their high energy requirements, do so without spending unnecessary time and effort by means of their excellent memory which Allah bestowed upon them as a great blessing. Although they take nectar from hundreds of flowers, they remember which flowers they visited and they do not burden the same flower again. After an interval of time later, the flowers refresh their nectar. It is very important for hummingbirds not to lose time by visiting dried flowers. It is more efficient to remember which flowers which have more nectar than other flowers.

Prof. Hurley determined that hummingbirds learn how long it takes for the flowers to replenish their nectar, and thus never go back to a dried flower. His research brought to light that these birds have the ability to remember the replenishment timing of at least eight flowers. Hurly commented: “Hummingbirds act as they have eight different stopping places in their brains.” (Hurly’s Hummingbird Research Makes Headlines)

Prof. Hurley, who encountered this remarkable memory performance of the hummingbird, decided to conduct a similar research among his class students. As a result of this research he commented that “Instead of nectar, I gave them sugar. Although my students’ brains are 7, 000 times bigger in comparison to a hummingbird, they could not duplicate the same performance as this small bird and they had difficulty in remembering the minutes of giving sugar. (Hurly’s Hummingbird Research Makes Headlines)

It should not be forgotten that the hummingbird which is being spoken of here weighs only three grams, and it its brain is about 7,000 times smaller than that of a human being.

This tiny bird which weighs only three grams, and has a brain 7,000 times smaller than that of a human being, is nonetheless capable of remembering the nectar replenishment times of about to eight different flowers; how can this tiny creature remember something which has been demonstrated to cause difficulties for adult humans? Evolutionists cannot answer these kinds of questions with claims of “mutations”.

After all, is a bird capable of the conscious recognition that it will die if it uses its energy in a fruitless search for food in order to sustain its high metabolism? And can it then decide to improve its memory as a necessary solution to its problem? How does this tiny bird know exactly how long it takes for a flower to refill its supply of nectar, and furthermore, how does it know exactly which flower to return to and remember its flight pattern back to that flower? How does it differentiate between the different flowers? 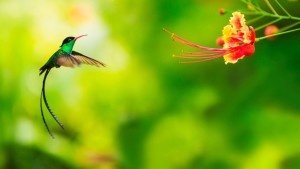 The evolutionists, who claim that life arose due to circumstance and mutation, cannot answer these questions. The only answer to these questions is that the hummingbird acts with the inspiration provided to it by our Lord, Almighty Allah, Who created all things flawlessly. It is Allah Who created the hummingbird, and the hummingbird acts with His inspiration in order to live; Allah has created all the conditions for all living things by which they may not only continue to survive, but thrive. It is Allah Who gave to the hummingbird the ability to remember when and to which flowers it should return to, and it is our Almighty Lord Who alone possesses the infinite power to create all things in their perfection. Allah gives life to all things, and sustains all things, from the universe itself, to all the human beings who have ever lived or will live until the Day of Judgment, from the plants, to the tiny hummingbird, in which we can surely see a Sign of His omniscience and omnipotence.

Allah declared in the Qur’an that:

“There is no living creature on Earth that does not receive sustenance from Allah. He knows its dwelling and resting place. Everything is recorded in a manifest Book.” (Hud, 11:6)

Allah inspires the hummingbirds as to how, when, and from where it will take its sustenance. He creates all the living beings who are on the Earth and in the sky in each moment. Every breath is taken by His permission. He knows every vital process in every living beings’ bodies because it is He Who Himself created those processes. All the living beings act at the direction and inspiration of Almighty Allah.

“Surely I rely on Allah, my Lord and your Lord, there is no living creature but He holds it by its forelock; surely my Lord is on the right path.” (Hud, 11:56)

One thought on “Hummingbirds and Nectar”