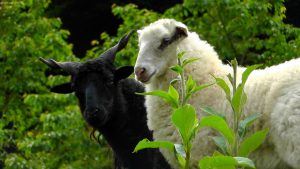 According to Census of Marine Life scientists, there are an estimated 8.7 million living species on earth, and yet the Qur’an teaches us that humans are the highest of creation. With this elevated status comes an elevated responsibility.

This responsibility encompasses not only how we treat our own bodies, actions, and interactions with each other, but also how we treat other creations such as animals. Yes, animals have rights and a legitimate place in Islam. The Qur’an refers to animals as independent communities to be acknowledged and respected: “And there is no creature on [or within] the earth or bird that flies with its wings except [that they are] communities like you. We have not neglected in the Register a thing. Then unto their Lord they will be gathered” (Al-An`am 6:38).

At the same time, many animals serve numerous purposes; some of which are for our direct beneficial use, consumption, and companionship while others are part of the circle of life and benefit us indirectly. Regardless of whether we gain any benefit from the animals around us, the Islamic perspective on animal welfare includes treating all animals as independent communities sharing this earth, finding the balance between respecting their independence while at the same time enjoying their benefits and friendship as God intended, all the while avoiding any type of cruelty toward animals.

Despite not having the free will or brainpower that is bestowed upon humans, animals nonetheless live their lives the way God created them to obey His laws and follow the natural cycle of the earth. We are reminded in the Qur’an, “Do you not see that God is exalted by whomever is within the heavens and the earth and [by] the birds with wings spread [in flight]? Each [of them] has known his [means of] prayer and exalting [Him], and God is Knowing of what they do.” (An-Nur 24:41).

This verse shows us that animals have duties and connections with the larger world, including praising God. Hence, we must respect their independent existence without infringing on their rights and responsibilities.

When Prophet Nuh (Peace Be Upon Him [PBUH]) built his ark, he was not only commanded to save the believers among his tribe, but also to preserve the existing animal species by collecting a pair of each. This shows us the importance and value of animals within our living cycle. In the Qur’an, it says, “[So it was], until when Our command came and the oven overflowed, We said, ‘Load upon the ship of each [creature] two mates and your family, except those about whom the word has preceded, and [include] whoever has believed.’ But none had believed with him, except a few” (Hud 11:40).

In addition, many animals provide us with food, fertilize our plants, as well as inedible, yet similarly valuable products, such as wool, fur, and leather. These benefits are mentioned in the Qur’an: “Do you not see that God has made subject to you whatever is in the heavens and whatever is in the earth and amply bestowed upon you His favors, [both] apparent and unapparent? But of the people is he who disputes about God without knowledge or guidance or an enlightening Book [from Him]” (Luqman 31:20).

An important piece of information here is that despite the overwhelming benefits we gain from animals, God has commanded us to nonetheless share the earth with all living creatures. Therefore, although we gain many benefits from animals, we must remember that we are obligated to care for them and treat them as blessings and with compassion, for the Prophet (PBUH) said, “Anyone who shows mercy, even to an animal meant for slaughtering, will be shown mercy by God on the Day of Rising.”–Al-Adab Al-Mufrad, Book 20, Hadith 10.

According to the Prophet’s (PBUH) teachings, farmers and caretakers must abide by certain guidelines when dealing with animals:

These Islamic directives came to us over 700 years ago. Similarly, in more modern times, we have what is internationally known as the Five Freedoms outlining five aspects of animal welfare as developed in the United Kingdom in 1965 and formalized in 1979 by the United Kingdom Farm Animal Welfare Council. Subsequently, these Five Freedoms were adopted by internationally prominent animal welfare societies, including the World Organization for Animal Health and the American Society for the Prevention of Cruelty to Animals. The Five Freedoms are:

When most people in the West hear the term, “animal protection from cruelty,” they may think of domestic pets such as dogs and cats with little to no regard for livestock, birds, and wild animals. It seems that these types of animals are held in less esteem since most of the time we see them not as living, breathing creatures, but as butchered pieces, packaged for sale, or hung up as hunting trophies.

In Islam, we are taught that all animals—livestock, birds, pets, and wild—must be treated kindly and respectfully. Even the animals we slaughter have rights. It was narrated by Shaddad bin Aws that the Prophet (PBUH) said: “Indeed Allah has decreed Ihsan [responsibility to obtain excellence in worship] in everything. So when you kill, then do the killing well, and when you slaughter, then do the slaughtering well. Let one of you sharpen his blade, and let him comfort his animal (before slaughtering)”–Jami at-Tirmidhi, Vol. 3, Book 14, Hadith 1409.

The provisions of respect and anti-cruelty also extend to animals that we do not consume. In some ways, hunting wild animals can be seen as a form of corruption since these animals are not hunted for sustenance, but for amusement and arrogance. It was narrated from Abdullah bin ‘Amr, who attributed it to the Messenger of God (PBUH), who said, “There is no person who kills a small bird or anything larger, for no just reason, but God will ask him about it.” The companions then asked, “O Messenger of God, what does ‘just reason’ mean?” He replied, “That you slaughter it and eat it, and do not cut off its head and throw it aside.”–Sunan An-Nasa’i, Chapter 42, Hadith 4450.

Indeed, killing an animal for no beneficial reason, or treating them with cruelty is a sin and a violation of their rights. Even birds that are killed unjustly will come beseeching God for justice on the Day of Judgement. It was narrated that Amr bin Sharid heard the Messenger of God (PBUH) say, “Whoever kills a small bird for no reason, it will beseech God on the Day of Resurrection saying: O Lord, so and so killed me for no reason, and he did not kill me for any beneficial purpose.”–Sunan An-Nasa’i, Chapter 42, Hadith 4451.

In another instance, it was narrated that Abdullah bin Ja’far said, “The Messenger of God (PBUH) passed by some people who were shooting arrows at a ram. He denounced that and said: ‘Do not disfigure animals (by using them as targets).’” –Sunan An-Nasa’i, Chapter 42, Hadith 4445. Indeed, cruelty against animals for the purpose of sports and entertainment is forbidden. Islam teaches us to be careful and respectful to our animals.

There is a great reward for treating them kindly and great punishment for violating their rights. For example, it was narrated from Abu Hurairah, that the Prophet (PBUH) said, “A prostitute was forgiven by God, because, passing by a panting dog near a well and seeing that the dog was about to die of thirst, she took off her shoe, and tying it with her head-cover she drew out some water for it. So, God forgave her because of that.” –Sahih al-Bukhari, Vol. 4, Book 54, Hadith 127. Despite her lifestyle, her mercy toward the dog elevated her in the eyes of God, as He rewarded her with forgiveness from her sins.

All living creatures are created to survive and communicate under certain guidelines and ethics; this most prominently includes the wide array of animals who function seamlessly in a circle of life. Before the boom of human civilization, animals and other living habitats did not have to suffer from overfishing, hunting, destruction of habitats, human agriculture, urbanization, and the use of toxins such as pesticides and herbicides.

Animal extinction is an unfortunate side effect of our own sprawling existence. Despite all of this, many animals learn to adapt and even thrive. By God’s grace and wisdom, He continues to show us our elevated status among living things by having other species adapt to our continuously evolving lifestyles. Therefore, it is our responsibility to return not with arrogance and a sense of superiority, but with compassion and deference to our fellow creatures.

In the end, animal welfare is not only a valid topic of discussion but a serious issue we must address and ponder within our lifestyles. Just as we are created on this earth to serve a purpose, so have animals, plants, and all other known and unknown living species. We must take our place in this circle of life and try to leave it behind a little better than what we inherit.

About the Author: Asma Jarad is a freelance writer, an editor, and a YouTube creator at Sami & Amro Reading Time.