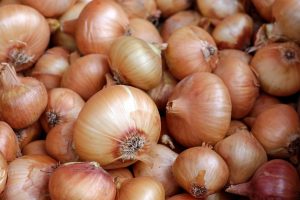 Whether raw or sautéed, pickled or fried, onions always bring the unique taste of sweet and tangy to every meal. Known for their zesty flavor and pungent scent, they release chemicals that can irritate our eyes when chopped. Despite the tears, it does not stop us from adding them to our favorite dishes. This delicious vegetable is packed with nutrients and brings bold flavor to salads, soups, meat, and seafood dishes.

The geographic origin of the onion is unknown due to its ancestor plant, the wild onion, being extinct. However, its use and cultivation go as far back as the Bronze Age of civilization. Ancient records exist of their cultivation in Western and Eastern civilizations, as far back as 5000 BCE. Onions were especially valued for their flavor, long shelf, and use in herbal and traditional medicine. Known as the bulb onion or common onion, it has a papery skin covering a shiny bulb with a notable strong smell.

The more well-known variety of onions come in three basic colors: yellow, red, and white. Yellow onions, or brown onions, referred to as red in some European countries, have a strong flavor due to the high sulfur content. They also have quercetin, a bitter flavored flavanol used as an ingredient in beverages and foods. About 90% of the onions grown in the United States are yellow onions. They are used to make French onion soup, sautéed dishes, and shish kebabs. When caramelized, they turn dark brown, giving a savory flavor.

Red onions, known as purple onions in Europe, are brightly colored with red-purplish skin and white flesh. Generally eaten raw or lightly cooked, red onions are often used to garnish salads. Their reddish skins add a pop of color and sharp taste to a sea of leafy green vegetables. They have a mild to sweet flavor and are higher in fiber and flavonoids when compared to yellow and white onions.

White onions have a sweet and mild taste and are considered a staple food in Mexican cuisine. They are golden brown when sautéed. Small white onions, known as boiler onions, are used in soups, stews, casseroles, and salads. There is also a certain type of white onion known as a sweet onion. Its low sulfur and high-water content make it less smelly and milder than other onions. Moreover, you will not cry when you cut them!

There are other types of vegetables that belong to the onion family, such as leeks, chives, shallots, and spring onions. Because they have long, thin green shoots, most people do not associate them with bulb-shaped onions. Green onion, or scallions, also belong to this family. Processed forms of onions are available such as onion powder and dried minced onions. These can be a great substitute for when there is no time for cutting. Onion salt, a mixture of salt and ground onion powder, is also a quick way to add flavor to any meat or vegetable dish.

Onions are mentioned in the Quran as one of the many delicious vegetables requested by the Children of Israel.

“And [recall] when you said, “O Moses, we can never endure one [kind of] food. So call upon your Lord to bring forth for us from the earth its green herbs and its cucumbers and its garlic and its lentils and its onions. “…” (Al-Baqarah 2:61)

Onions are tasty, but they cause smelly breath, which can be bothersome to your fellow worshippers at the mosque. Therefore, the Prophet (Peace Be Upon Him [PBUH]), encourages us to avoid attending the mosque after eating onions. Of course, some simple dental hygiene can combat this problem. Some toothpaste and mouthwash go a long way! Narrated Mu’awiyah ibn Qurrah: The Messenger of Allah (PBUH) forbade these two plants (i.e. garlic and onions), and he said: He who eats them should not come near our mosque. If it is necessary to eat them, make them dead by cooking, that is, onions and garlic.—Sunan Abi Dawud, Book 27, Hadith 3818. Cooking to death, a phrase still used in culinary culture, means cooking them for a long period. Your friends, family, and your fellow worshippers at the mosque will appreciate it.

Onions have many health benefits. One medium-sized onion has 44 calories. “Onions are super-healthy,” says Victoria Jarzabkowski, a nutritionist with the Fitness Institute of Texas at the University of Texas at Austin. “They are excellent sources of vitamin C, sulfuric compounds, flavonoids, and phytochemicals.” Vitamin C helps regulate our immunity, tissue repair, and iron absorption. Vitamin C is also an antioxidant, a compound that helps prevent damage caused by free radicals or harmful molecules. They also contain Vitamin B, including folate (B9) and pyridoxine (B6), and potassium. Vitamin B promotes metabolism, red blood cell production, and nerve function. Potassium is good for cardiovascular health, bone strength, and muscle strength.

Want to know how to avoid “onion eyes?” Cutting onions in a small pool of water can help keep the gases from contacting your eyes. Cutting the onion near running water, using a fan, or opening a window for a fresh source of air also helps. Refrigerating the onions before use reduces the enzyme reaction rate. In addition, the more one exposes themselves to cutting onions, the less tears there will be.

Kelly Izdihar Crosby is an artist and editorial assistant living in Atlanta, GA.

Reprinted from the Fall 2019 issue of Halal Consumer© magazine.