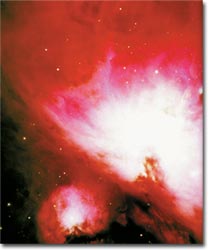 Pulsars are the remains of extinguished stars which emit very powerful, pulse-like radio waves and which revolve very rapidly around their own axes. It has been calculated that there are more than 500 pulsars in the Milky Way, of which our Earth is a part.

The word “Tariq,” name of the Surah 86, comes from the root “tarq,” whose basic meaning is that of striking hard enough to produce a sound, or hitting. Bearing in mind the word’s possible meaning as “beating,” “striking hard,” our attention may be being drawn in this Surah to an important scientific fact. Before analyzing this information, let us look at the other words employed in the verse to describe these stars.

The term “alttariqi” in the above verse means a star that pierces the night, that pierces the darkness, born at night, piercing and moving on, beating, striking, or sharp star. Furthermore, the term “waal” draws attention to the things being sworn on-the heaven and the Tariq.

Through research carried out by Jocelyn Bell Burnell, at Cambridge University in 1967, a regular radio signal was identified. Until that time, however, it was not known that that there was a heavenly body that could be the source of regular pulse or beating rather like that of the heart.

In 1967, however, astronomers stated that, as matter grows denser in the core as it revolves around its own axis, the star’s magnetic field also grows stronger, and thus gives rise to a magnetic field at its poles 1 trillion times stronger than that of Earth. They realized that a body revolving so fast and with such a powerful magnetic field emits rays consisting of very powerful radio waves in a conic form at every revolution.

Shortly afterwards, it was also realized that the source of these signals is the rapid revolution of neutron stars. These newly discovered neutron stars are known as “pulsars.” These stars, which turn into pulsars through supernova explosions, are of the greatest mass, and are the brightest and fastest moving bodies in the universe. Some pulsars revolve 600 times a second.

The word “pulsar” comes from the verb to pulse. According to the American Heritage Dictionary, the word means to pulsate, to beat. Encarta Dictionary defines it as to beat rhythmically, to move or throb with a strong regular rhythm. Again, according to the Encarta Dictionary, the word “pulsate,” which comes from the same root, means to expand and contract with a strong regular beat.

Following that discovery, it was realized that the phenomenon described in the Qur’an as “tariq,” beating, bore a great similarity to the neutron stars known as pulsars.

Neutron stars form as the nuclei of supergiant stars collapse. The highly compressed and dense matter, in the form of a rapidly revolving sphere, entraps and squeezes most of the star’s weight and magnetic field. The powerful magnetic field created by these rapidly revolving neutron stars has been shown to cause the emission of powerful radio waves observable on Earth.

In the third verse of Surat at-Tariq the term “alnnajmu alththaqibu,” meaning piercing, piercing and moving on, or opening holes indicates that Tariq is a bright star that pierces a hole in the darkness and moves on. The concept of the term “adraka” in the expression “And what will convey to you what the Tariq is?” refers to comprehension. Pulsars, formed through the compression of stars several times the size of the Sun, are among those celestial bodies that are hard to comprehend. The question in the verse emphasizes how hard it is to comprehend this beating star. (Allah knows best.)

As discussed, the stars described as Tariq in the Qur’an bear a close similarity to the pulsars described in the 20th century, and may reveal to us another scientific miracle of the Qur’an.

One thought on “Pulsars: Pulsating Stars”