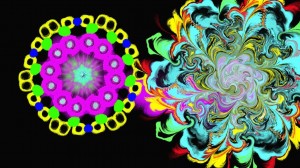 In fact, it has been discovered that the protons, neutrons and electrons which form the atom are also compounds which give the atom its weight.

Following the development of the atomic theory of the Greek philosopher Democritus, people used to believe that matter consisted of minute, indivisible and indestructible particles known as atoms. However, advances in the study of atoms have refuted this notion. At the present time, modern science has revealed that the atom, previously regarded as the smallest particle, can actually be split. This fact only emerged in the last century, but was revealed in the Qur’an 1,400 years ago:

“… He is the Knower of the Unseen, Whom not an atom’s weight eludes, either in the heavens or in the earth; nor is there anything smaller or larger than that which is not in a Clear Book.” (Saba’ 34:3)

“… Not even an atom’s weight eludes your Lord, either on earth or in heaven. Nor is there anything smaller than that, or larger, which is not in a Clear Book.” (Yunus 10:61)

This verse refers to “atom” and smaller particles still.

1. Ordinary matter consists of atoms bound together by electromagnetic force to form molecules. These molecules come together to form solids, liquids and gasses.

2. Atoms consist of a dense nucleus surrounded by a cloud of electrons. Electromagnetic force holds the nucleus and electrons together.

3. The nucleus consists of protons and neutrons held together by a powerful nuclear force.

4. Protons and neutrons consist of three quarks each and are held together by powerful nuclear force.

Up until 20 years ago, it was believed that the smallest particles were the protons and neutrons which comprise the atom. Very recently, however, even smaller particles of which these themselves consist were discovered. A specialized branch of physics, called “particle physics,” emerged to study these “sub-particles” and their particular behavior. Particle physics research has revealed that the protons and neutrons which comprise the atoms actually consist of sub-particles known as quarks. The size of these quarks, the basic components of protons, whose small size is beyond human conception, is astonishing: 10-18 (0.000000000000000001 of a meter).(1)

Another point worthy of note is that these verses draw particular attention to the weight of the atom. The word “mithqal,” in the expression “mithqali tharratin” (an atom’s weight) in the above verses, means weight. In fact, it has been discovered that the protons, neutrons and electrons which form the atom are also compounds which give the atom its weight. Therefore, it is yet another scientific miracle of the Qur’an that attention is drawn instead to the weight of the atom and not its size or any other feature.

In Chapter “Joseph”, the ruler of Egypt is called “King” and not “Pharaoh”. Why?