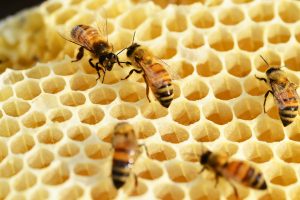 In the Qur’an, Allah reveals that He has inspired the bee and told it what it should do:

“Your Lord revealed to the bees: “Build dwellings in the mountains and the trees, and also in the structures that people erect. Then eat from every kind of fruit and travel the paths of your Lord, which have been made easy for you to follow.” From inside them comes a drink of varying colors, containing healing for mankind. There is certainly a Sign in that for people who reflect.” (An-Nahl 16:68-69)

As we know, bees collect pollen and produce honey by mixing pollen with secretions from their own bodies. In order to store the honey and raise their young, they make hexagonal wax cells, all of which are exceedingly ordered, have the same angle, and are generally identical. They build honeycombs with these. Moreover, bees that leave the hive in search of food and always return to it possess special systems Allah creates so that they can find their way home.

For an insect to know about the angles in hexagons, discover the formula for wax and design the systems necessary for producing it in their own bodies, and then fit such information into its own DNA so that future members of the same species will possess the same abilities are all, of course, impossible.

It is self-evident that bees have been taught all of these things by a higher power. In other words, such knowledge has been inspired in them, as the verses reveal. Allah, Who knows all, describes to the bee what it needs to do, and the bee then acts in the full light of that inspiration. Such conscious behavior is clear evidence of creation.

The study of such properties in animals reveals the flawless design and higher consciousness inherent in living things. Such things allow one to understand once again Allah’s incomparable might. He has the power to create whatever creature He wills and with whatever attributes He wills, possesses limitless might, and is the Ruler of all.

However, evolutionists believe that such extraordinary features of living things came about by chance. According to this illogical claim, bees learned to calculate angles and managed to transfer that knowledge to other bees by chance. Chance also led to the emergence of bodily systems for producing wax and honey.

Just a few seconds of thought is sufficient to see that such imaginary scenarios are far removed from reason and science. Allah creates bees and gives them consciousness. Such miracles of creation place evolutionists in a dilemma from which they can never escape.