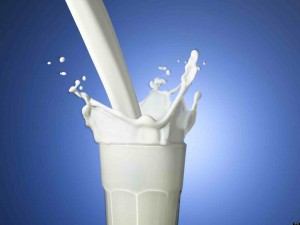 High-nutrition milk is thus produced from blood, which cannot be consumed directly, and semi-digested food.

“There is instruction for you in cattle. From the contents of their bellies, from between the dung and blood, We give you pure milk to drink, easy for drinkers to swallow.” (An-Nahl 16:66)

“Say: ‘Who provides for you from the heavens and earth?’ Say: ‘Allah. It is certain that one or the other of us, either we or you, is following guidance or else clearly astray.’” (Saba’ 34:24)

The basic materials which allow the nourishment of the body come about as a result of chemical changes in the digestive system. These digested substances then pass through the wall of the intestine into the blood stream. Due to the circulation of the blood, the nutriments reach the relevant organs.

Like the other bodily tissues, the milk glands are nourished by nutriments brought to them by the blood. The blood therefore plays a most important role in the collection of nutriments from foodstuffs. Milk is secreted by the milk glands after all these stages and its nutritional values are particularly high.

Human beings are unable to directly consume either the half-digested food in an animal’s stomach or an animal’s blood. Furthermore, the direct consumption of these or any of their compounds can lead to severe illness, and even death. Thanks to the exceedingly complex biological systems He has created, Allah provides clean and healthy food for human beings from these fluids.

This is because it forms as a result of digested food being carried by the blood. High-nutrition milk is thus produced from blood, which cannot be consumed directly, and semi-digested food.

The formation of milk is by itself an enormous creation miracle. And it is another miracle altogether that such detailed information about that formation should be contained in the Qur’an.

As we have seen, the information about the biological formation of milk in Surat An-Nahl 16:66, is in great accordance with the facts established by modern science. It is quite clear that such information, requiring detailed knowledge of mammals’ digestive systems, could not have been known at the time when the Qur’an was revealed.