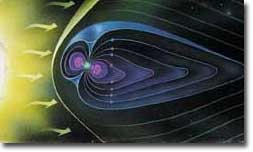 In short, a perfect system is at work high above the Earth.

In the Qur’an, Allah calls our attention to a very important attribute of the sky:

“We made the sky a preserved and protected roof yet still they turn away from Our Signs.” (Al-Anbiya’ 21:32)

This attribute of the sky has been proved by scientific research carried out in the 20th century: The atmosphere surrounding the Earth serves crucial functions for the continuity of life. While destroying many meteors-big and small-as they approach the Earth, it prevents them from falling to Earth and harming living things.

In addition, the atmosphere filters the light rays coming from space that are harmful to living things. The most striking feature of the atmosphere is that it lets only harmless and useful rays-visible light, near-ultraviolet light and radio waves pass through. All of this radiation is vital for life. Near ultraviolet rays, which are only partially let in by the atmosphere, are very important for the photosynthesis of plants and for the survival of all living beings. The majority of the intense ultraviolet rays emitted from the Sun are filtered out by the ozone layer of the atmosphere. Only a limited and essential part of the ultraviolet spectrum reaches the Earth.

The protective function of the atmosphere does not end here. The atmosphere also protects the earth from the freezing cold of the space, which is approximately -270oC.

It is not only the atmosphere that protects the Earth from harmful effects. In addition to the atmosphere, the Van Allen Belt-the layer caused by the magnetic field of the Earth-also serves as a shield against the harmful radiation that threatens our planet. This radiation, which is constantly emitted by the Sun and other stars, is deadly to living things. If the Van Allen belt did not exist, the massive outbursts of energy called solar flares that frequently occur in the Sun would destroy all life on Earth.

All these scientific findings prove that the world is protected in a very particular way. The important thing is that this protection was made known in the Qur’an in the verse “We made the sky a preserved and protected roof” fourteen centuries ago.

On the importance of the Van Allen Belt, Dr. Hugh Ross says:

The energy transmitted in just one of these bursts detected in recent years was calculated to be equivalent to 100 billion atomic bombs, each akin to one dropped on Hiroshima at the end of World War II. Fifty-eight hours after the burst, it was observed that the magnetic needles of compasses displayed unusual movement and 250 kilometres above the Earth’s atmosphere, the temperature suddenly increased to 2,500oC.

Most people looking at the sky do not think about the protective aspect of the atmosphere. They almost never think what kind of a place the world would be like if this structure did not exist. The above photo belongs to a giant crater caused by a meteor that fell in Arizona, in the USA. If the atmosphere did not exist, millions of meteoroids would fall to the Earth and the Earth would become an inhabitable place. Yet, the protective aspect of the atmosphere allows living things to survive in safety. This is certainly Allah’s protection of people and a miracle proclaimed in the Qur’an.

In short, a perfect system is at work high above the Earth. It surrounds our world and protects it against external threats. Centuries ago, Allah informed us in the Qur’an of the world’s atmosphere functioning as a protective shield.