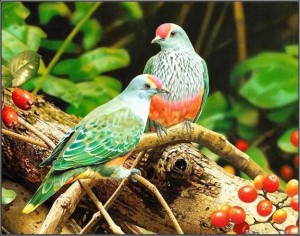 In its claims about birds’ evolution, evolutionary theory, as in all other fields of science, is full of contradictions.

Defenders of the evolutionary theory base their claims more on a series of hypotheses and assumptions than on findings and research results.

Several of our books have presented scientific evidence of the illogic and contradictions in evolutionary theory, and have presented the invalidity of their claims with their own admissions.

In this article, accordingly, we will deal only with the subject of how birds, with their various physical characteristics and talent for mimicry, present evidence to counter evolutionary theory.

Among the most important examples that invalidate evolutionary theory are the birds that can imitate sounds and human speech.

Songbirds, Parrots and Hummingbirds—Three Groups of Birds that can Imitate—Have Similar Physical and Mental Characteristics in Spite of Not Being Related.

According to the evolutionists, songbirds, parrots and hummingbirds must come from a single ancestor, because of their similar physical and mental characteristics. However, these three categories of birds are not related in any way and so, are placed in different branches of the hypothetical evolutionary tree.

First and foremost, no fossils of any common ancestor have been found, nor are any similar characteristics found in other varieties of birds closely related to these species. Accordingly, evolutionists are unable to answer the question of how these categories of bird all possess the ability to be able to speak and imitate sounds, despite being so far apart from one another on the imaginary evolutionary tree.

Gradually, therefore, research has pushed the evolutionists into an impasse. For example, a test carried out on the Anna hummingbird (Calypte anna) in 1990 established that some of the males imitated the singing of other birds. This is firm evidence of the hummingbird’s ability to learn songs.

As a result of tests carried out on talking birds, scientists concluded that when the hummingbird is singing, its brain is activated in seven different places. This same observation also is true for songbirds and parrots.

This discovery creates serious problems regarding the evolutionary phases between living creatures. The songs of birds that can imitate sound are genetically coded, as opposed to sounds that they learn later in life. Of these, however, only adult songbirds, parrots and hummingbirds have the ability to learn songs and repeat them accurately.

According to Erich Jarvis, a neurobiologist at Duke University Medical Center, this kind of vocal learning closely resembles the process by which humans learn to speak. Surprisingly, this research shows that birds skilled at vocal learning are in a completely different branch of the so-called evolutionary path. What’s more, none of the species that evolutionists claim are closely related to these birds can learn any similar songs.

Regarding this subject, two evolutionary scenarios are put forward. The first states that all birds come from a common ancestor with the necessary brain structure for imitating sounds but that somehow, only certain species developed the ability. The other species were unsuccessful in this respect and lost these skills over time.

However, this scenario is not given credit, not even by many evolutionists! According to celebrated neurobiologist Erich Jarvis, it seems extremely unlikely that this trait could be gained or lost more than once in both birds and mammals. If this kind of undeveloped brain structure exists, asks Jarvis, then why is it not present in reptiles and dinosaurs as well?

Evolutionists put forward a second scenario: that in the brains of these three birds, these learning structures each evolved independently of one another. This claim is not only scientifically unfounded but also cannot answer the most basic questions: How did this skill come about in birds?

How is it passed on from generation to generation? And how was the necessary physiological structure for this skill formed? Of course, evolutionists cannot produce a tenable explanation for how this came about in even one of these species. Thus, it is unreasonable for them to claim that the three different bird species have evolved independently.

Facts that science has proven also show how evolutionists lack solutions on this subject. Erich Jarvis expressed the situation in which he found himself, in the light of scientific findings:

… Birds challenge all of us to rethink outmoded concepts of evolution… Throughout our education, we have this concept of linear evolution instilled in us. We’re told that … vertebrates evolved from some worm-like creature to fish, amphibians, reptiles, birds, mammals, and so forth, and that living vertebrates represent these stages in both body plan and brain intelligence. And once there were mammals, they evolved to primates, then humans, being last at the top of the hierarchy. But this concept of lower and higher in the vertebrate lineage is just completely false.

The evolutionary tree on which the evolutionists rely is a strained series of links between different animal species. This tree, based on anatomical similarities among animals, has no real scientific foundation and, as an inevitable result, is full of contradictions. One example is exemplified by those birds that imitate sounds.

According to the family tree theory, three living species belonging to three very different branches share one highly complex characteristic—in vocal learning, the same seven areas of the brain are activated in all three. As has been shown, similarities among animals are no evidence of evolution. Attempts to claim otherwise are no more than biased interpretation in the name of science.

Taken with slight editorial modifications from the book: The Miracle of Talking Birds by Harun Yahya.