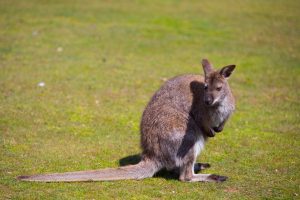 You may ask, “Is it possible that an animal could have a pocket?” Surprisingly, kangaroos have a “pouch” on their bellies where baby kangaroos are fed and protected during their development.

The appearance of a joey (baby kangaroo) whose head appears from its mother’s pouch arouses feelings of compassion in us. This baby, coming out of the womb when it was only one centimeter (0.393 inches) long – that is before it was fully–developed – reached its mother’s pouch after a three-minute journey.

There are four different nipples in the pouch of the mother. The new-born sucks the nipple that issues a milk with just the right temperature and amount of fat for a new-born. The other three nipples, on the other hand, contain milk meeting the needs of an older baby. In a few weeks, the new-born stops suckling its nipple and finds another nipple from which issues a milk prepared for its own needs. As it grows older, it finds a third nipple with the type of milk specially prepared for its needs.

At this point, you must ask yourself the questions, “How can a baby kangaroo one centimeter long know the right nipple that would meet its needs?”, “How has the mother kangaroo placed milk in her four nipples with such different ingredients?” What is more, the milk the new-born baby sucks is hotter than the other milk from the other nipples. Their ingredients are also different. This being the case, how did the mother kangaroo manage to heat this milk? How has she added the necessary ingredients to this milk?

Remember, it is not the mother who has accomplished all these things. The mother kangaroo does not even know that the milk issuing from the nipples is different. It is unlikely that she could compute the temperature of the milk produced by her nipples. She cannot manage to provide each nipple with different kinds of milk. She cannot even know that they are different. She is only a kangaroo living under Allah’s watchful care. Her baby’s needs are taken care of by Allah. Our Lord, the All-Compassionate and Most Merciful, has placed the most appropriate milk in the most appropriate place for the babies, that is, in the mother’s pouch.

Meanwhile, before the first joey leaves the pouch, a new brother or sister crawls into the pouch. They both live in the same pouch for a long time, without giving any harm to one another. Each joey sucks on the nipple with the milk containing just the right ingredients for their needs. Then, how do the two siblings know which nipple to suck? The answer is obvious: by Allah’s inspiration.

Kangaroos are awesome with their huge bodies; the body is one and a half meters long and the tail one meter (39 inches) long. Thanks to their long hind limbs, the kangaroo family can traverse a distance of eight meters in only a moment. While running, they maintain balance by their big strong tails. Do you think their feet have become large by coincidence? Or, do you think their mother estimated that they would need large hind limbs to leap? Of course, none of these give us the right answer. Nothing has come into existence accidentally. Allah, the One Who creates everything according to the needs of creatures, has also created kangaroos like all other creatures in their most perfect form.

“He [Allah] hath created the heavens without supports that ye can see and hath cast into the earth firm hills so that it quakes not with you, and He hath dispersed therein all kinds of beasts. And We send down water from the sky and We cause (plants) of every goodly kind to grow therein. This is the Creation of Allah. Now show me that which those (ye worship) beside Him have created. Nay, but the wrongdoers are in error manifest!” (Luqman 31: 10-11)