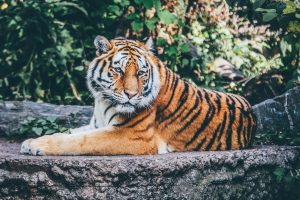 It is among the miracles in nature that living creatures take precautions to protect themselves. Many creatures have the capability to estimate potential hazards and to invent various security methods.

For instance, the termites that we mentioned build the walls of their colonies so thick and hard that they can hardly be destroyed even with a pickaxe. Weaverbirds build the entrance of their nests in such a way as to prevent snakes, their main enemies, from entering.

Some spiders have special chambers in their nests in which other animals that have somehow entered the nest are confined.

Beehives also operate special protective measures. The bees that are employed to stand guard over the hive do not let anyone in other than members of the colony. When a guardian is away, another worker bee comes to the entrance of the hive and takes over the watch. Moreover, these guardian bees carry out this task at the risk of their own lives.

Beavers build their lodges underwater. In order to enter, one has to pass through a secret tunnel known only by the beaver that built that lodge. At the end of the tunnel, there is a chamber where beavers live together with their offspring.

Even these examples are sufficient for us to understand that there is intelligence in the way living creatures act and that they employ very effective methods to protect themselves. Besides, you may have noted that the enemy of a species may be another species. However, all creatures know their enemies very well and take elaborate precautions against them. It is quite surprising that a termite or a bird, despite the fact that it lacks advanced intellectual functions, can know the features of another creature.

To comprehend it better, think about yourself. Can you understand at first sight the characteristics of an animal that you do not know and have not seen before? Can you know what it feeds on, how it hunts and what it fears? Of course you cannot. You need a book to read and to get information about that creature or someone to tell you about its attributes. But how can animals have information about other creatures? Might they have found out who their enemies are and then conducted a study of their behavior and hunting methods, upon the basis of which they have developed suitable precautions? Certainly not.

No animal has the intellectual capabilities and talent to do research. Besides, it would also be unreasonable and nonsensical to think that animals gathered information about their enemies by chance because failing in the first attempt would mean death.

Undoubtedly it is Allah Who determines the security measures that animals use and makes them act as necessary. The fact that not only the animals we see around us, but all living creatures in the world behave in the same intelligent way points to the infinite wisdom and power of our Lord.