The Amazing Creation of the Fire Ants 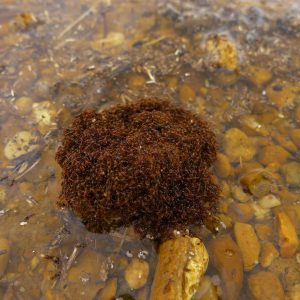 These ants, equipped as they are with an extraordinary defense system, are certainly not aware of it.

Fire ants are red insects of diminutive size. Yet they can achieve great things in spite of their smallness. The queens of these ants, which have 20 varieties in America alone, may produce as many as 5,000 eggs a day. While many ant species colonies have a few hundred workers, the colonies of this species have about half a million workers. A single mated fire ant queen can produce a colony of 240,000 workers.

Fire ant workers very aggressively attack their prey with poisonous needles. It has been recorded that young fire ants have injured or even killed reptiles or baby deer. Also, these aggressive ants may cause power failures by tearing up electricity cables. For a while, they invaded South America and caused frightening damage. The journals and magazines of that year tell us that these ants have chewed through electrical cables and caused power cuts; they have caused damage to crops worth billions of dollars; they have caused motorways to collapse and have stung people, causing allergic shocks that have rendered them helpless. They have done all this with their powerful mandibles, even digging tunnels under roads causing motorways, roads to collapse and also causing other kinds of havoc in the environment.

American experts have tried various methods to prevent the above-mentioned damage done by fire ants. They considered spreading a contagious disease inside the colony by injecting germs into the flies the ants eat. Yet, astonishingly, it was seen that such flies with germs in no way hurt the ants. In the analysis, it was found out that the ants have one of the most interesting defense systems in the world of living beings: a structure in their throats which protects them from germs… Because of this structure, the bacteria in anything that the ants eat were held at the throat without entering into the body.

But we have not come to the end of the protection systems of the fire ants that are the product of a superior intellect. They also spurt an anti-microbial fluid produced in their venom sacs around the nest and on the larvae. Thus, they achieve total disinfection of the nest and the larvae.

These ants, equipped as they are with an extraordinary defense system, are certainly not aware of it. Can any person with a conscience claim that such a system has evolved by chance? Neither may it be claimed that the ants have founded such a system on their own. Then who is it that placed this filter in the throats of the ants, and who inspired them to produce an anti-microbial fluid? Without doubt, the Creator of such characteristics as man, ants, and random luck cannot produce is Allah, Who is All-Knowing.

The defense specialist fire ants are also highly skilled and hard working. They may build hills 30 cm high and 60 cm wide, or they can dig labyrinthine tunnels that can go 1.5 m deep underground. In certain areas, fire ants have built small hills numbering up to 350. The capacity of such small beings to set up such huge nests, of course, depends on their industriousness. Then what is the power that makes the ants one of the most industrious living beings in the world? It is truly astonishing that they work all day long without stopping or resting, and build nests dispersed over vast areas. Not a single one says, “I worked too hard today, let me rest a bit,” or “I don’t want to work today. Let me sit in a corner.” This is a subject that must be carefully considered. It must not be forgotten that there are times when human beings give in to exhaustion, even when they know they have to conclude a task, and there are times when they do not apply their will because they are tired or they feel lazy. Yet ants display great effort and the will to bring any job they start to fruition. He Who gives the ants this will and resolve, that is even stronger than that of man’s, is, of course, the sole master of all beings – Allah.

Master of Tactic Who Can Penetrate Defense Systems

The most frightening enemy of fire ants is Solenopsis Davgeri, which is a parasitic ant species. This living being which can penetrate their multi-leveled defense system, which even man has difficulty in understanding, is yet another ant species. It is not known how this parasite ant can “seep into” the nest of the fire ant. Yet once it is in, the parasite ant immediately attacks the queen and clamps on to her antenna, legs or thorax. While the worker ants normally have to destroy any aggressor, why they do nothing against this particular creature seems hard to explain. Yet there is a simple answer. In itself attaching to her throat, the parasite mimics the queen’s pheromones. Subsequently, the workers devote their efforts to feeding the parasites, half a dozen of which might yoke the queen, because they think that this parasite imitating her pheromones is their queen. Their queen, on the other hand, starves to death in full view of the workers who serve her.