The Amazing Creation of the Fisher Puffins 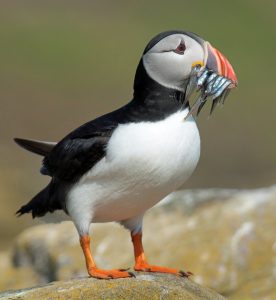 Holding a mouthful of freshly caught fish, an Atlantic puffin returns to its nesting site on a remote island in the Gulf of Maine. (Photo copyright Randy Rimland/Shutterstock.com.)

You might never have heard this animal’s name before, but, as you get to know him, you will both enjoy him and come to like him a lot.

Most people assume the puffin to be a kind of penguin. However, the puffin is actually a different kind of bird. Unlike a penguin, a puffin can fly, which is the greatest difference between them. Puffins live at the North Pole whereas penguins live at the South Pole. What they have in common is that both species can easily adapt themselves to a cold environment.

Puffins have very interesting lives. The mother and father puffins never leave one another all through their lives and raise a young puffin every year.

In the breeding season, the lines on their beaks, which are usually dull, turn a bright color. Yet, this color change does not occur accidentally. These lines, which serve a particular purpose, have been given especially to puffins by Allah. Thanks to these lines, puffins use their beaks like flags and thus communicate with one another over long distances.

Can you make a single line appear on your nose when you want to do so? Let’s assume that there exists such a line at birth. Can you turn it into an indistinct pattern or make it disappear? We can already hear you saying “No” because you already know that it is only our Lord Who can accomplish such artistry!

It is easy for our Lord to create various kinds of birds and to endow them with features suiting their habitats. Similarly, it is easy for Him to create a line on their beaks or to make it disappear.

Allah, Who has created puffins so beautifully, has also given them some other striking features. Now, let’s continue examining these features:

Once they are six weeks old, young puffins leave their parents and begin to fly over the open sea.

A healthy puffin lives for about 25 years.

Puffins can dive very deep. Do you know what awaits a human being who wants to dive as deep as a puffin? First of all, he needs an oxygen supply. Besides that, he risks his life since the pressure on one increases as one dives deeper and deeper. For this reason, diving requires great mastery. How did puffins learn the techniques necessary to keep their breath in deep water and to get back to the surface again? Our Lord once again shows us His sublimity and the uniqueness of His artistry in creation.

Here is another beautiful aspect of the puffin: The mouth structure of puffins enables them to hold many little fish in their mouths. Indeed, a puffin can hold 62 fish at a time. The mother has only one purpose in holding so many fish in her mouth: to feed her babies! So, if you see a puffin with many fish in its mouth, remember that it has a baby to feed.