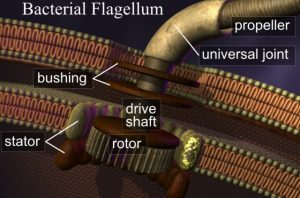 The bacterial flagellum is clear evidence that even in supposedly “primitive” creatures there is an extraordinary design.

The most important person to bring the concept of irreducible complexity to the forefront of the scientific agenda is the biochemist Michael J. Behe of Lehigh University in the United States.

In his book Darwin’s Black Box: The Biochemical Challenge to Evolution, published in 1996, Behe examines the irreducibly complex structure of the cell and a number of other biochemical structures, and reveals that it is impossible to account for these by evolution. According to Behe, the real explanation of life is intelligent design.

Behe’s book was a serious blow to Darwinism. In fact, Peter van Inwagen, Professor of Philosophy at the University of Notre Dame, stresses the importance of the book in this manner:

One of the interesting examples of irreducible complexity that Behe gives in his book is the bacterial flagellum. This is a whip-like organ that is used by some bacteria to move about in a liquid environment. This organ is embedded in the cell membrane, and enables the bacterium to move in a chosen direction at a particular speed.

Scientists have known about the flagellum for some time. However, its structural details, which have only emerged over the last decade or so, have come as a great surprise to them. It has been discovered that the flagellum moves by means of a very complicated “organic motor,” and not by a simple vibratory mechanism as was earlier believed. This propeller-like engine is constructed on the same mechanical principles as an electric motor. There are two main parts to it: a moving part (the “rotor”) and a stationary one (the “stator”). 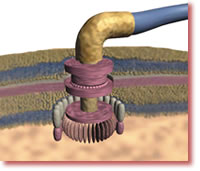 Left: An electric motor – but not one in a household appliance or vehicle. This one is in a bacterium. Thanks to this motor, bacteria have been able to move those organs known as “flagella” and thus swim in water. This was discovered in the 1970s, and astounded the world of science, because this “irreducibly complex” organ, made up of some 240 distinct proteins, cannot be explained by chance mechanisms as Darwin had proposed.

The bacterial flagellum is different from all other organic systems that produce mechanical motion. The cell does not utilize available energy stored as ATP molecules. Instead, it has a special energy source: Bacteria use energy from the flow of ions across their outer cell membranes. The inner structure of the motor is extremely complex. Approximately 240 distinct proteins go into constructing the flagellum. Each one of these is carefully positioned. Scientists have determined that these proteins carry the signals to turn the motor on or off, form joints to facilitate movements at the atomic scale, and activate other proteins that connect the flagellum to the cell membrane. The models constructed to summarize the working of the system are enough to depict the complicated nature of the system.

The complicated structure of the bacterial flagellum is sufficient all by itself to demolish the theory of evolution, since the flagellum has an irreducibly complex structure. If one single molecule in this fabulously complex structure were to disappear, or become defective, the flagellum would neither work nor be of any use to the bacterium. The flagellum must have been working perfectly from the first moment of its existence. This fact again reveals the nonsense in the theory of evolution’s assertion of “step by step development.” In fact, not one evolutionary biologist has so far succeeded in explaining the origin of the bacterial flagellum although a few tried to do so.

The bacterial flagellum is clear evidence that even in supposedly “primitive” creatures there is an extraordinary design. As humanity learns more about the details, it becomes increasingly obvious that the organisms considered to be the simplest by the scientists of the nineteenth century, including Darwin, are in fact just as complex as any others.

Taken from the author’s book: DEVOTION AMONG ANIMALS REVEALING THE WORK OF GOD. Published by GLOBAL PUBLISHING. Okmeydani-Istanbul/Turkey.