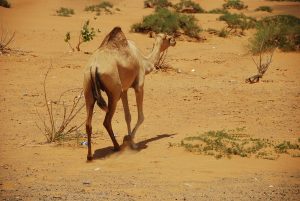 It is beyond doubt that all beings reflect the endless Power and Knowledge of their Creator. This fact is expressed in many verses of the Qur’an, constantly emphasizing that everything created by Allah is actually evidence of belief and a lesson for admonition.

The 17th verse of the Chapter Al-Gashiyah, which is “Do they not look at the Camels, how they are made?“, mentions an animal that has to be carefully examined and thought about: This is the ‘camel’. In this article, we will study this animal on which the Qur’an invites us to ponder about.

The exclusively specific characteristic of the camel is its body structure, which is not affected even in the most severe circumstances. Its body has such features that for many days, it can survive without water and food and can even travel with a bulk of hundreds of kilograms on its back. Many characteristics of the camel constitute evidence that this animal is created particularly for the dry climate conditions, and put into service for the comfort of man.

In the Qur’an, it is stated; “Verily, in the alternation of the night and the day, and in all that Allah hath created, in the heavens and the earth, are signs for those who fear Him.” [Yunus 10:6]

The camel is specially designed for the conditions of the desert. As a matter of fact, each part of the animal’s body has to be investigated in order to understand how it is “made” by Allah.

Feet for all types of land; its feet are donated with two toes connected to each other with a flexible cushion. This structure which enables it to firmly grasp the land consists of four fat-balls. These feet are totally proper for all kinds of land conditions. Its nails protect the foot against any potential damages that may occur as a result of blows. Knees are covered with a structure called “callus”, which is composed of skin as hard and thick as horn. When the animal lays down on the hot sands, this calloused structure protects the animal from being defected by the extremely hot sand.

The hump as a food stock; the hump of the camel forms is a mass of fats, and provides nutriment to the animal periodically in times of starvation. With this system, this animal can live 3 weeks without water, whilst it loses 33% of its weight. Under the same severe circumstances, a human being would lose 8% of his weight but die within 36 hours. Since he would completely lose the water in his body.

Heat insulating fur; this fur consists of thick and felted hair that does not only protect the body of the animal against cold and hot climatic conditions but also eliminate the water loss of the body. The Hecin camel can delay the perspiration of its body by means of increasing its body temperature up to 41° C, and thus prevents the water loss. With its thick fur, camels in Asia can survive high temperatures reaching up to +50° C in summer and falling down to -50° C in winter. Head sheltered from the sand; the eyelashes of the camel are designed like two separate combs clamping together. In case of danger, they are automatically closed. With this special design, even a single grain of sand is not let into the eye. Nose and ears are covered with long hairs for protection from sand and dust. Its long neck enables the animal to reach and feed on the leaves, which are 3 meters high from the ground.

In addition to the above features, the camel also has other specialized systems in its body. Actually, each one of these qualities of the animal gives it proficiency in the harsh conditions of the desert. These features may be categorized as below:

Resistance to Thirst and Hunger

Camels can live without food and water for 8 days under temperatures of 50° C. During this period, it loses 22% of its body weight. However, it can survive even if it loses 40% of the water in its body, whilst loosing just 12% would cause a man’s death. Another reason for its endurance against thirst is a mechanism that enables the camel to increase its internal temperature up to 41° C. Thanks to this, the animal keeps the water loss at the minimum level in the extreme hot climates of the desert. Camels can also decrease their internal body temperature down to 30° C in the cold nights of the desert.

Camels can consume 130 litres of water almost in 10 minutes. This amount is approximately one-third of their body weight. Besides, camels also have a mucus structure in their nose, which is 100 times larger in area than the man. Every time the animal breathes, the air is moisturized by the mucus. When we breathe, we lose 16 mg of water vapour for every litre of air. However, with the structure of the mucus, camels can get use of the moisture in the air in a ratio of 66%.

Maximum Benefit from Food and Water

Most of the animals die when the accumulated urea in their body gets into the blood circulatory system. Yet, camels use this urea produced in their body, by filtering it through the liver continuously. Consequently, they use it as a source of protein and water. Both the blood and cell structures of the camel are specialized for enabling this animal to survive for long periods.

Hump is another aide to the camel. One-fifth of the camel’s body is stored as fat in its hump. The storage of the body fat in only one part of the camel’s body prevents it from losing water all through body. This lets its body to use a minimum amount of water. Although a camel with humps can take in 30-50 kilograms of food in a day, it is able to live one month with only 2 kg of grass.

In addition, camels have very strong and rubber-like lips that make it easier for them to eat thorns sharp enough to pierce leather. Furthermore, it possesses such a strong digestive system that it can eat everything it comes across with like plastic plates, copper wire and reeds. The four-chambered stomach of this wonderful animal gets use of everything, even other than food. It is rather obvious how precious these features of the camels are in such a dry climate.

“Do ye not see that Allah has subjected to your (use) all things in the heavens and on earth, and has made his bounties flow to you in exceeding measure, (both) seen and unseen? Yet there are among men those who dispute about Allah, without knowledge and without guidance, and without a Book to enlighten them!” [Luqman 31:20]

Now, let us think in the light of this information: Has the camel adapted its own body to the desert conditions on its own? Has it formed its own mucus of the nose or the hump on its back? Or, has it designed its own nose and eye structure with protection against wind whirls and storms? Has it arranged its own blood and cell structure based on the principle to prevent waste of water? Has it chosen itself the type of hair covering its body? Has it converted itself to a ‘desert ship’ on its own?

Just like any other living being, the camel surely cannot execute any of the above-listed features in itself. Moreover, it cannot make itself advantageous or beneficial to mankind. The verse in the Qur’an stating, “Do not they look at the camel, how it is created?” explains the creation of this excellent animal in the best way. As the other beings, camel is too, created with many characteristics and then placed on earth as a sign of the excellence of the Creator in creation. While it is created with such superior physical features, it has been given to the service of humankind. On the other hand, humankind is given the responsibility to see similar miracles of creation throughout the whole universe and know the Creator of all beings, Allah.