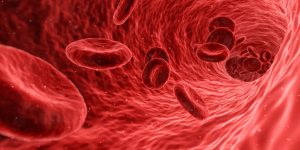 Red blood cells are produced by the stem cells in the bone marrow, that rubbery tissue in the largest bones in the body.

Red blood cells, or erythrocytes, are the most numerous cells in the blood. Their job is to transport oxygen, the most essential material for the survival of all the body’s cells. They go further than this, however, and in order to purify the body, also carry away the carbon dioxide that accumulates in the cells as a byproduct of metabolism.

Approximately 99% of the blood cells in a drop of blood is made up of red blood cells. There are around 25 trillion of these erythrocytes in our bodies. This figure is hundreds of times the number of stars in the Milky Way Galaxy. To realize that the red blood cells in your body could easily cover half of a football pitch will help you grasp the magnitude of this number. Stretched end to end, these cells would form a tower 50,000 kilometers (or 31,070 miles) high. If we were able to spread the erythrocytes in the body out like a carpet, then these cells would cover an area of 3,800 square kilometers (or 1,467 square miles). There are so very many red blood cells in the body that every second up to 3 million new red blood cells enter the bloodstream just to replace those that have died.

Red blood cells are produced by the stem cells in the bone marrow, that rubbery tissue in the largest bones in the body. During its four-month lifespan, a single red blood cell travels between the lungs and the other tissues of the body 75,000 times before returning to the bone marrow. By the time you turn this page, you will have lost some 3 million red blood cells throughout your body. At the same time, a similar number will also have been produced in your bone marrow.

Maintaining this equilibrium is most important. Blood cells that have completed their life spans are always replaced by new ones because the bone marrow is in a constant state of production. Its cells begin this intensive process with the receipt of a chemical signal, and this production then comes to an end once the need has been met.

The chemical communication that brings this about is truly staggering to contemplate. Cells communicate by means of hundreds of different kinds of molecules. The message that needs to be transmitted to the stem cell is attached to a protein and sent on its way. The target cell extends a protein receptor that will let the incoming signal be recognized. When this receptor binds to the protein carrying the chemical message, the information reaches the target cell.

This process, briefly described here in just a few sentences, is actually far more complex. Today’s scientists are still trying to unravel the secrets of this communication system. The “decision” by which stem cells send the daughter cells they have produced to the place in the body that requires them is one of the most important fields of present-day research. The fact that this system in the body is of a complexity whose secret human beings have been unable to unravel is just one clear indication that it was created by Almighty God, Who possesses infinite wisdom.

How is it possible to produce the right amount of red blood cells in the body every second and then direct them confidently to the points where these new cells are needed? It is impossible for a lone independent cell in the bone marrow to know what is happening at the other parts of the body. The signaling system employed by those cells is also the most perfect communication network possible. This perfect structure is, of course, the work of God, Who knows all the processes taking place in the body, right down to the finest detail, and Who creates and constructs them in the first place.

Red blood cells are exceedingly small because before entering the bloodstream, they expel most of their contents—their nucleus, mitochondria, ribosome and other organelles. They do this in a literally conscious manner because they “know” they must absorb a miraculous molecule known as hemoglobin (about which, you’ll find more details in the following pages). By expelling most of their organelles and picking up hemoglobin, red blood cells enable this molecule to perform its tasks in a reliable manner, during its lifespan of approximately four months.

The red blood cell membrane serves an important sheath for hemoglobin, which lacks a cell membrane of its own and is therefore exceedingly vulnerable. Thanks to various enzymes contained in this protective layer, hemoglobin is also protected against degeneration.

Red blood cells are the only cells in the blood which have lost their nuclei. The organelles which they expel are immediately destroyed by the white blood cells, the body’s disposal operatives. What is surprising is that despite being deprived of the nucleus, which carries all their data, red blood cells still preserve the enzymes and proteins necessary for them to survive without difficulty during their 120-day lifespan. Thanks to these special precautions taken for them throughout those four months, they are able to remain alive. However, they are now merely transporters that are unable to divide and hence, unable to reproduce themselves as ordinary cells do.

As this one example will show, there is enormous complexity in the systems in the human body. Before you finish this book, you will see many astonishing details regarding the blood and the systems that it controls. The way that a red blood cell expels the organelles inside it, sacrificing its own nucleus—which contains all the essential data for its long-term survival; keeping only those elements necessary for it to live for a fairly brief length of time—is just one of those details. In order to be able to do all this, the red blood cell has to distinguish between necessary and unnecessary organelles during its short lifespan, know that it must absorb hemoglobin—and, even more crucially, be aware of the importance of hemoglobin for human life. If just one of these tiny details is neglected, if the red blood cell does not take hemoglobin into itself for example, then oxygen would not be distributed in the body.

We need to point out that this behavior—the red blood cell’s essentially agreeing to its own demise—deals a severe blow to Darwin’s theory of evolution. Charles Darwin assumed that all organisms wage war to ensure the survival of their descendants. Richard Dawkins, today’s proponent of Darwinism, suggests that this struggle for survival can be reduced even to the genetic level and that the genes of every living thing fight to ensure their existence. In fact, however, the erythrocyte, a living cell, behaves in a manner that is the exact antithesis of that hypothesis: It sacrifices itself by abandoning its nucleus and its genes. That is because it did not come into being by chance during any “struggle for survival” as Darwinists would have us believe, but was created with a specific function.

This function is never corrupted for as long as we live. God, Who has created everything totally flawlessly, has also created this special cell, which constitutes one of the countless proofs of His creation. In the Qur’an, it is revealed that God is the Lord of all:

“I have put my trust in God, my Lord, and your Lord. There is no creature He does not hold by the forelock. My Lord is on a Straight Path.” (Hud: 56)

A.O. is a Turkish writer and author.