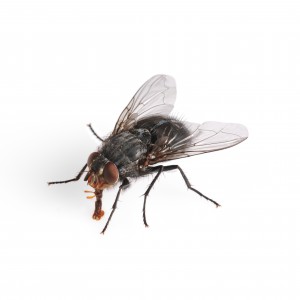 There is no single fossil that proves this imaginary evolution of flies.

While evolutionists claim that dinosaurs turned into birds, they also say that some dinosaurs, which swung their front legs in order to catch flies, “developed wings and began to elevate from the ground.”

This theory, which has no scientific basis or merit, and is based on imagination, also includes a very simple dilemma; because the example shown by evolutionists to explain the origins of flight, includes the fly, a creature which already has a perfect ability of flight.

While a person cannot even swing his arms 10 times per second, an average fly has the ability to flap its wings 500 times or more.

Moreover, it can flap both of its wings simultaneously. If there were any kind of inconsistency between the vibrations of the wings, the fly would lose its balance, but no such inconsistency ever happens. While evolutionists try to explain how this perfect ability of flight came into existence, instead they produce imaginary scenarios that show a fly as the cause of the flight of a much larger and completely non-aerodynamic being, meaning a reptile.

However, even the examples of superior creation in the fly makes this claim of evolutionists invalid. In addition, there is no single fossil that proves this imaginary evolution of flies. The famous French zoologist Grassé confesses this when he says, “We are in the dark concerning the origin of insects”. (Pierre-P Grassé, Evolution of Living Organisms, New York: Academic Press, 1977, p. 30)

One thought on “The Deceit of the Origins of Flies”

Pingback: The Deceit of the Origins of Flies | İmpact