The Evolutionist Impasse that Emerges with the Microorganisms 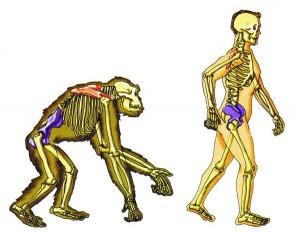 The Evolutionist Impasse that Emerges with the Microorganisms

What can be the reason for the existence of the boundless universe?

Planets thousands of kilometres in size, suns with surface temperatures of millions of degrees, billions of galaxies containing trillions of stars, space with its magnetic fields and gravitational forces… all these?

The answer is evident: For us to appreciate the existence and greatness of Allah.

The frontiers of this sublime creation are so wide, yet even the existence of a single atom it is enough to demonstrate Allah’s Creation. He has created detail upon detail, perfection upon perfection, and flawlessness upon flawlessness. Besides bringing into being a universe with extraordinarily delicate balances and flawless systems whose boundaries we can never fathom, Allah has also created this micro-world.

We are aware of it only through microscopes, but it nevertheless also possesses the same delicate balances, fine details and flawless systems. Allah displays His artistry both in the boundless depths of space and inside a single cell, leaving no doubt that He is Lord of everything in the Earth and skies. He has revealed in the Qur’an:

He is Allah—the Creator, the Maker, the Giver of Form. To Him belong the Most Beautiful Names. Everything in the heavens and Earth glorifies Him. He is the Almighty, the All-Wise. (Al-Hashr 59:24)

This superior artistry brings with it insuperable obstacles for the theory of evolution. Every aspect of the world possesses its own innumerable details. It is impossible for a theory based on coincidence to account for even one of these details. The microorganisms we have examined here make a very strong refutation of the theory of evolution, according to which, the first living thing to appear and later, gradually evolve, was a microorganism.

Fictitious classifications divide animals and plants into various phyla, classes, and orders, and it is claimed that each division evolved from the one before. Again according to this theory, the living world with its present extraordinary variety constitutes the latest branches of this fictitious tree, or which a single-celled microorganism is a common ancestor.

If we now remove this microorganism from the tree, nothing will be left—neither animals, nor plants, nor human beings, nor species. In short, nothing at all. In fact, all the different features described throughout this book, and hundreds of others besides, reveal that microorganisms cannot be the works of chance. That being so, the so-called “first living thing” that supposedly initiated evolution cannot have come into being spontaneous.

These tiny living things, which have co-existed alongside us for millions of years and directly influence our lives, but whose existence we discovered only a century ago, display seemingly conscious behaviour. They can develop tactics like a strategist, devise formulae like a chemist, and work as a laboratory technician. But even these analogies fail to do them justice.

A human may err or forget, yet the chances of these microorganisms making a mistake are virtually non-existent. They also possess capabilities superior to any laboratory’s. Many of the processes they perform still cannot be carried out artificially.

Darwin, and the Darwinists who came after him, insisted for many years on classifying these living things as simple. Only in the 1940s did they suddenly learn that microorganisms also have a complex genetic structure. In 1944 they saw that starting with bacteria, all living things have DNA.

The science of genetics opened the doors of a discipline that evolutionists had never conceived of, and had never expected. Another element —and a most wide-ranging one!–was added to the living world they were already incapable of explaining.

Research has shown that some of these entities provide 70% of the Earth’s oxygen, that others break down organic molecules, that some carry out the nitrogen cycle. Great many cleans up the Earth and play a vital role in many other similar, vital mechanisms. Without these microorganisms that Darwin called “simple,” there would be no life at all.

Darwinists sought a solution by ignoring the various facts revealed by genetics. Indeed, examine whichever evolutionist work you like, and you will see that it refers to the features of microorganisms only briefly, sometimes not at all. The few evolutionists who do mention them must admit that these facts place them a grave quandary:

This unique sequence represents a choice of one out of 102.000.000 alternative ways of arranging the bases! We are compelled to conclude that the origin of the first life was a unique event, which cannot be discussed in terms of probability.

Above the level of the virus, the simplest fully living unit is almost incredibly complex. It has become commonplace to speak of evolution from amoeba to man as if the amoeba were the simple beginning of the process. On the contrary, if as must almost necessarily be true life arose as a simple molecular system, the progression from this state to that of the amoeba is at least as great as from amoeba to man.

Darwinists may admit that these tiny organisms have a very complex structure, yet still refuse to regard them as miraculous works of art created by Allah. They insist that the impossible took place by chance, even if they do not really believe that. Evolution is an ideology, founded on believing in the impossible instead of in the existence of Allah, whose goal is to make people believe the impossible.

There are no experimental evidence and no scientific results to support it. As Phillip E. Johnson has commented:

Power to create complex plants and animals from bacteria is also more a philosophical doctrine than an empirical one. . . .

To witness this fact more closely, consider the discrepancies among evolutionist claims regarding the structure of microorganisms.

Evolutionist claims maintain that the first characteristic acquired by the first bacterium was the ability to produce its own food, via photosynthesis. In fact, however, even in that portion of photosynthesis that’s currently understood, all the processes performed are exceedingly complex chemical ones.

In order to carry them out, you first need to produce a system to perform those processes and then squeeze them into minute organelles inside a cell. Yet it is quite impossible for you to create such a laboratory. That being so, it’s utterly illogical to claim that such a superior technology came into existence by chance in the first living cell.

The German evolutionary biologist Hoimar von Ditfurth describes the complexity possessed by algae—the most important source of photosynthesis and thus of great importance from the evolutionist perspective:

The oldest fossils discovered to date are algae with no nucleus fossilized inside minerals and date back more than 3 billion years. No matter how primitive they may be, even these manifest relatively complex and expertly organized lifestyles.

To review how these organisms represent a quandary for evolution:

These microorganisms possess exactly the same forms today as they did millions of years ago. Yet according to the illusory process of evolution, their forms should have gradually changed to give rise to wide-ranging life and should have lost their “simple” states.

Clearly, that is not the case. Fossils from the past, are important evidence that they never underwent evolution at all. Fossilized mites from 400 million years ago are identical to present-day mites. 25-million-year-old bacteria spores have remained unchanged and have continued multiplying alongside present-day bacteria. Present-day algae are the same as fossilized ones dating back 3 billion years.

This “sameness” disquiets proponents of Darwinism, who are unable to account for the living species that have undergone no changes despite the passage of billions of years, maintaining the exact same complexity.

Despite their consisting of one or at most a few cells, all the systems necessary for these microorganisms to survive must be present. Every one of these structures is of vital importance. Remove anyone, and it becomes impossible for the organism to survive. Therefore, though it possesses just a few organelles, a bacterium must exist together with all of them. This makes it impossible to have developed over time, in stages.

In any case, exceedingly complex processes such as photosynthesis or the nitrogen cycle represent evidence that no such gradual transition could have taken place. The mechanisms that carry out these chemical processes inside a single cell cannot have developed over time. A bacterium cannot exist without all these features, and cannot survive if even one of the proteins that constitute it is missing. Yet the necessity of sudden development contradicts Darwin’s theory.

According to Darwinists, evolution began with microorganisms. Single-celled algae living in water underwent changes and later, emerged onto land. First of all, it is impossible for algae, with prokaryotic cell features, to suddenly develop eukaryotic features and turn into a plant. The type of cell cannot turn into the other. Second, algae require special metabolism and various systems to live in water. To live on dry land, its entire metabolism must change to adapt to the land environment. That is impossible, even for the single-celled algae.

The theory of evolution cites the transition of algae from water to land as proof. However, this is not proof at all. Despite being members of the same family, land and water algae have totally different characteristics. Algae on land have metabolisms suited to life on land. In the same way, aqueous algae can survive only in water. As you have already seen, it is impossible for them to adapt to life on land by altering their metabolism.

The theory of evolution cannot account for the mutual relations among these microorganisms. Sometimes permits both parties to benefit from the relationship; at other times one species labours as a volunteer while only the other benefits. The way that two living things co-exist in union rather than in competition with one another, each making sacrifices for the other, totally undermines the “survival of the fittest” mandate of evolution.

One of the questions that leave Darwinists in a quandary is why these microorganisms make such huge efforts for the sake of life on Earth. Why does a bacterium decide to provide the Earth with oxygen? Why does a mite feel the need to cleanse its environment? Why do algae provide food for the fungi they inhabit? Why does a virus even smaller than a bacterium invades living cells, and cause an organism billions of times larger than itself to fall ill or even die?

Or why are microorganisms indispensable for certain processes? For example, why can’t we absorb Vitamin K directly from the food we eat, and depend on bacteria to meet that need? Why cannot plants absorb nitrogen, one of their fundamental requirements and which makes up 80% of the atmosphere, directly from the atmosphere, but do so with the help of microorganisms in the soil?

If evolution had really taken place, then bacteria’s transformation of the nitrogen in the air into nitrate and ammonia and being given to plants in that way would be impossible. From all these questions, which evolutionists will never be able to answer, it becomes clear that no such process ever took place.