God Is the Ever-Living (Al-Hayy) 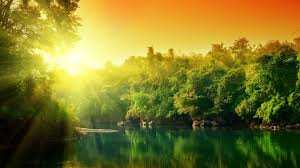 The Qur’an refers to God as “the Living” on five occasions.

“Faces shall be humbled before the Living, the Self-Sustaining. Hopeless indeed will be those who carry a burden of injustice. (Ta-Ha 20: 111)

“Allah, there is no God but He, the Living and Self-Sustaining. Neither slumber nor sleep overtakes him…” (Al-Baqarah 2: 255)

God’s life is the most complete and perfect life without deficiency or weakness of any kind. “Neither slumber nor sleep overtakes him.”

God is the Living who confers life upon others. He creates and sustains all living things in their mortal lives in this world. Then, in the Hereafter, He confers eternal life upon the denizens of Paradise.  It is one of the signs of God’s creative power that He imbues inert matter with life.

Consider a stone and then compare it with an animate living thing, something which has sensory power, is aware of its surroundings, and is able to interact with other things in its environment. Consider the human being, a living thing with the power to reason and to articulate his thoughts through speech.

When we consider how far removed this is from the inert matter of the stone, we can see why God challenges humanity with the example of life, and cites it as proof of our resurrection in the Hereafter. We see this in how God describes the unbeliever:

“He strikes out a likeness for Us, but forgets his own creation. He says: “Who will give life to the bones when they have rotten away?” Say: He will give them life who created them the first time – for He well-knows every creation – the same who produces for you fire out of the green tree, and behold! you kindle therewith (your own fires)!” (Ya-Sin 36: 78-80)

This verse was revealed after a group of Arab polytheists came forward with some old rotting bones, crumbling them between their fingers and saying: “Who will give life to the bones when they have rotten away?” This is a rhetorical question, spoken in derision. They asked this question to express their disbelief and disdain of the idea of a resurrection in the Hereafter.  God replies that the disputant: “forgets his own creation.”

This is a concise but sufficient reply to the question of “Who will give life to the bones when they have rotten away?”

God simply reminds the disputant of his being created in the first place. The second creation could be nothing if not easier. In any case, it is no different to God whether it is the first or second creation. However, considering the question of creating something from a human perspective on the matter, the second would be perceived as easier than the first.  This is why God says:

“As We began the first creation, We shall repeat it. It is a promise We have undertaken; truly We shall fulfill it.” (Al-Anbiya’ 21: 104)

Both creations are the same to God. God but says: “Be!” and it is. However, He gives this example to address human experience. People who believe that God created them in the first place accept the fact that God gave the properties of life, sensory faculties, and mental powers to the inert matter from which they are made.

Consequently, they can easily accept the idea that God can bring them to life again after they have died and their bones have turned to dust.