Al-Sumait: The Story of a True Humanitarian 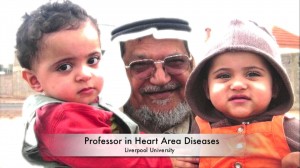 Al-Sumait provided treatment for patients, food for those who were hungry, and clothes for those who did not have them, irrespective of whether they were Muslims or non-Muslims.

Dr. Abdul Rahman Al-Sumait was an extraordinary human being who dedicated his life to doing good deeds. This man should be acknowledged and known for the major impact he had on millions of lives, not only in his hometown, but also worldwide.

Al-Sumait was an Islamic scholar, a medical practitioner, and a role model for all Muslims. Born and raised in Kuwait, he was a qualified doctor specializing in internal diseases and gastroenterology before becoming involved in charity work. He graduated from the University of Baghdad with a BS in Medicine and Surgery, a diploma in Tropical Diseases from the University of Liverpool in 1974, and then completed his postgraduate studies specializing in internal diseases and the digestive system at McGill University in Canada. By the time he was 35 years old, he decided to move and live in Africa, and he dedicated 29 years of his life there with his wife, contributing and helping millions of children with education, starvation, shelter, and religion.

As a young high school student in Kuwait, Al-Sumait witnessed a scene outside his school that sparked his interest in helping the less fortunate, and his life changed forever. He observed poor workers waiting for their means of transportation in the heat on a daily basis, and with some friends decided to save up from their pocket money and purchase an affordable car, and from that day onwards, he drove these workers for free.

At university Al-Sumait used the majority of his monthly salary to purchase Islamic books and would distribute them at mosques. He also took part in collecting money from fellow Muslim students and all together they used the money to pay for the printing and distribution of Islamic pamphlets throughout South East Asia and Africa.

Al-Sumait’s interest in Africa was ignited when he felt and saw that the continent of Africa was being neglected. Ethiopia, Eritrea, Djibouti, Kenya, Mozambique, Malawi, Zambia, and Angola, among many other nations in the area that were suffering from famine, hunger and disease, were the focus of Al-Sumait’s operations.

In 1981, when he was just 35 years old, he established the Africa Muslims Agency (AMA – later renamed Direct-Aid), where he served as chairman from 1981 to 2008. AMA is a charity organization that operates in more than 40 countries worldwide and aims to provide assistance to people suffering from economic and social crisis, mainly in Africa.

Upon his arrival to Africa, he was deeply saddened by the scenes of hunger and disease, so he decided to sacrifice his profession and dedicate himself fully to their benefit. Twenty-nine years of Al-Sumait’s life was spent in undertaking charitable works in Africa, only returning to Kuwait for short visits or to receive medical treatment; he was on a mission to assist those in need.

He sacrificed his life, time, skills and efforts to provide people less fortunate with a decent life. Al-Sumait also initiated a variety of projects in addition to Direct-Aid, which helped underprivileged people with the sole aim of easing their life from poverty.

The highlights of his accomplishments from his time in Africa are:

Although Al-Sumait’s journey in Africa was a major success, it was anything but smooth. Due to his time in Africa, he took numerous trips deep into the African jungles to conduct his work; with time he got high blood pressure, diabetes, a number of blood clots, and malaria, among other diseases. He was also the target of several failed assassination attempts by armed militias who were disturbed by his overwhelming presence and the impact he had on the poor and needy. In Mozambique, Kenya, and Malawi, Al-Sumait went through more than one near-death experience with deadly cobras. And he also had to experience the adversities of imprisonment at some point in his life. However, he still remained determined to fulfill and accomplish his aim of bringing peace, aid, and relief to Africa, whether it was with food, shelter, education, or religion.

Throughout his life, Dr. Al-Sumait’s efforts in charity work were recognized and acknowledged with honors, awards, trophies, and certificates, including the highly prestigious award, the King Faisal International Prize for Service to Islam. Dr. Abdul Rahman Al-Sumait was a remarkable man, truly an inspiration, and the definition of a true Muslim. He sacrificed his entire being for the benefit of others. His time and efforts are visible today and will always be visible, especially in the children of Africa who continue to receive education at various universities throughout the whole continent.

May Allah bless his soul and reward him immensely for the great life he leads. Amen.

One thought on “Al-Sumait: The Story of a True Humanitarian”